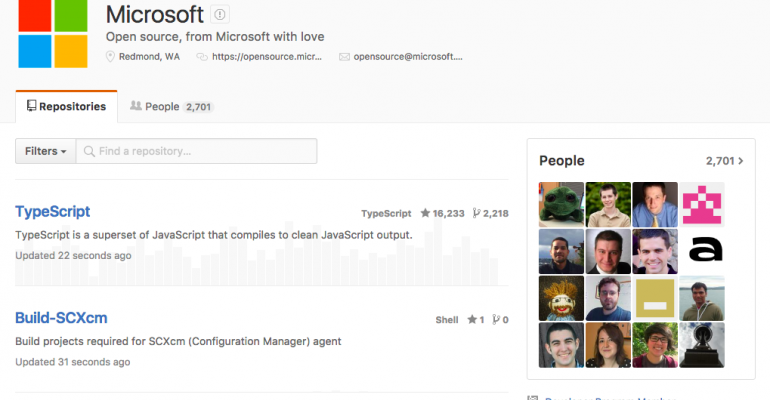 All appearances are that Microsoft is no longer an outsider within the enterprise open source community, but a full-fledged citizen.

It wasn't that long ago that folks thought all heck would break loose if ever the sound barrier was broken, which I presume is why they called it a barrier. I'm not sure what they were expecting to happen, but I think many figured it would be akin to an airplane hitting a brick wall at 600 MPH -- or worse, that crossing the barrier would do something to break the physical structure of the universe.

In the open source world, for the past six or seven years, starting when Redmond began making noises about wanting to court Linux and open source, there has been a similar myth, which we'll call the "Microsoft barrier." According to this train of thought, open source and Microsoft are as different as cats and dogs and if the two are ever put too close together they are destined to...well, fight like cats and dogs.

This came, of course, from years of Steve Ballmer and Bill Gates calling Linux and open source a cancer or worse, the FUD (fear, uncertainty and doubt) sowed against open source by Microsoft -- mostly through ads resolving around "total cost of ownership" -- and numerous patent threats.

Those days would seem to be over, at least as far as enterprise open source is concerned. The final end came on Wednesday and Thursday at the All Things Open conference in Raleigh, North Carolina.

As recently as three years ago, the thought that Linux and Windows devs would cooperate and work together would be considered heresy by most open sourcers, and Microsoft's efforts to woo the open source crowd seemed to be for naught. For example, in 2013 at the first ever All Things Open, Ross Gardler presented a session as a Microsoft evangelist. As the president of the Apache Foundation, Gardler brought to the table plenty of open source cred, so it probably seemed like a smooth move to the Microsoft execs to send him to the city that Red Hat built to give a talk called “Microsoft and Open Source.”

Suffice it to say, it didn't go well. Only five or six people showed up for the session, and no matter how many times Gardler repeated his mantra that "Microsoft has changed" or "Microsoft is more open now," it was obvious that nobody was buying what he had come to sell. The silence when he called for questions at the end of his presentation was deafening.

Since then, Microsoft's efforts have slowly been paying off, and even many open source oldtimers have grudgingly learned to work and play with Microsoft. It's no longer surprising to see the company playing a big role at open source conferences, and audiences these days listen to its pitches with respect if not with complete and wholehearted acceptance.

But Microsoft reps have still felt the need to apologize over and over again whenever speaking before an open source crowd. They were sorry they called the GPL a cancer. They were sorry for all of their "independent" studies that proved Windows less expensive to operate than Linux. And the speakers -- always people with loads of open source cred -- always felt compelled to start their presentations by explaining that three or four years ago they wouldn't have taken a job in Redmond, but "Microsoft is different now."

This was true as recently as this past August, when Microsoft's vice president of open source, Wim Coekaerts, began his keynote address at LinuxCon by saying, "I joined Microsoft exactly five months ago today. To be very honest, a year ago I would not have considered it and three years ago I have absolutely no idea if I would ever even want to talk to them. I certainly had a different sentiment many years ago about what Microsoft was doing, certainly around the open source space. But in the last several years the company has changed."

None of that was evident at this year's ATO. Not once did I hear any prerequisite apologies, and I only heard the I-only-work-for-Microsoft-because-the-company-has-changed disclaimer once. More surprising were the reactions from those attending Microsoft led sessions. The audience at one well-attended session, "Having Fun With Open Source at Microsoft," was positive, engaged and asked lots of questions. At another less well attended session, "Linux for the .Net Developer," the audience was also engaged, prepared and ready to learn about using .Net on Linux.

This may not seem like much, but from where I set this seems to be one of those paradigm shifts people like to talk about.

Microsoft has arrived at this point by being smart. For starters, it's been patient and allowed its relationship with the open source community to grow organically. It's also developed important partnerships with key open source players such as Red Hat and Canonical, and has open sourced lots of software, including some of its crown jewels.

There's still push back, to be sure. There were some grumblings from people at ATO that Microsoft presentations seemed to be more infomercial than information. And one speaker from Red Hat, after noting that Microsoft is now a legit open source company, mentioned that he couldn't help but wonder if there's a gotcha coming.

But overall, as far as enterprise open source is concerned, Microsoft is no longer an immigrant with a green card, but a bona fide open source citizen -- and it's happened without breaking the physical structure of the universe.