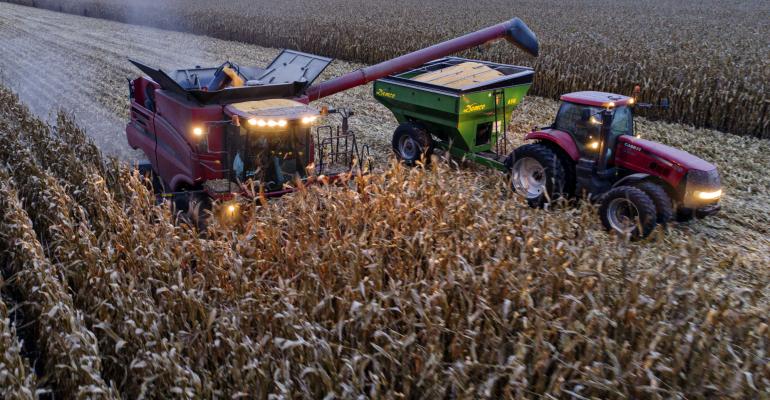 Investments in agriculture technology companies are growing, hitting $6.7 billion in the last five years, and the number of venture capital deals are increasing, according to Finistere Ventures, a San Diego-based venture capital firm. Through October 2018, there were 28 deals globally for companies making sensors and smart farm equipment, and 19 for imagery companies.

(Bloomberg) -- When surprise hailstorms hit the 6,000 acres Trevor Scherman plants each year with peas, wheat, canola and lentils, his first move isn’t to his truck to assess the damage. These days, it’s to his iPad.

Nine mini-weather stations from the Canadian firm Farmer’s Edge, along with daily satellite imagery from San Francisco-based Planet, provide Scherman with an intimate and easily accessible assessment for each of his fields. The stations, which include a soil probe, measure moisture and temperature in the air and in the root zone, wind speed and direction, and even dewpoint.

The companies are part of a wave of emerging high-tech firms helping farmers fight a historic foe -- bad weather -- that’s getting increasingly wilder and more capricious. At the same time, seed sellers Bayer Ag, Syngenta AG and DowDuPont Inc. are scouring the earth for more crop genes that will let them further geo-engineer plants to thrive in tough weather. Already, there’s been progress.

“We see right now a new paradigm in the production of corn and soybeans,” said Al Dutcher, an extension agricultural climatologist with the state climatologist’s office in Lincoln, Nebraska. “Technological advances are outpacing the problems.”

Investments in agriculture technology companies are growing, hitting $6.7 billion in the last five years, and the number of venture capital deals are increasing, according to Finistere Ventures, a San Diego-based venture capital firm. Through October 2018, there were 28 deals globally for companies making sensors and smart farm equipment, and 19 for imagery companies.

Valuations seem to be increasing as well, with Ceres Imaging Inc., which uses multiple sensors in farm flyovers, raising a $25 million Series B investment, according to Finistere.

At the same time, traditional seed companies are searching for more ways to protect plants from climate change’s new weather patterns. They’re exploring the genetics of African corn varieties that can go weeks without water as well as southeast Asia crops that have natural guards against diseases that warmer, more humid weather encourage.

Genes that help Mexican corn flourish in high heat have already been bred for wider use by Bayer. Originally meant for farms in the U.S. South, they’re now used as far north as Minnesota.

To deal with the weather changes, no advantage is too small. When corn is water-starved, for instance, the leaves curl, reducing photosynthesis and hurting yield. Delaying curling by even a few days can help, said Nathan Fields, vice president of production and sustainability at the National Corn Growers Association.

“Growers, really their biggest risk factor is the weather, and it always has been,” Fields said. “It’s getting more dramatic, but they’ve adapted in the past. They’re used to it. It’s more intense, but the seed produced today, the germplasm, is producing incredible plants that can withstand a lot of this.”

The next innovation in corn is coming to the market in the early part of the next decade. Bayer and BASF SE are working on developing seeds that limit plant height, with the aim to improve their ability to survive high winds without snapping or coming unlodged, said Bob Reiter, Bayer’s head of research and development.

Shorter plants will also allow farmers to get equipment into fields for more of the season, Reiter said, and the plants will need fewer nutrients to grow.

It isn’t an easy battle. Farmers are seeing more intensely erratic weather than they ever have. Fields near Wilmington, North Carolina, for instance, got more than a month’s worth of rain in a single day as Hurricane Florence swept over the state in September. Two farms a hundred miles apart might see floods in one, and drought in the other.

Herb Thomasson, a former in Melville, Louisiana, knows about extreme weather. Right now, he has a wary eye on the nearby Atchafalaya River, which -- along with the Mississippi River -- has been high for months, raising worry from Iowa to the Gulf of Mexico.

With melting snow up north and weeks of unrelenting rain, the fields are still too wet to plant, he said. At one point over the past few years, the fields close to the river drowned under the Atchafalaya, Thomasson said, while those protected by a levee across the street from his house withered in a drought. A few weeks later a tornado cut across his land.

“That was probably the worst,” Thomasson said by telephone last week.

“We’ve got to work with nature instead of trying to change it,” said Del Ficke, a Nebraska farmer whose state was recently victimized by record flooding that caused 75 counties to declare emergencies. “Whether you believe in climate change or not, it’s changing.”

Along with making weather more extreme and unpredictable, regional dynamics for crops are also changing. The 100th meridian, a north-south line that runs through the Great Plains and separates the dry West from the humid East, is creeping eastward by more than a quarter-mile a day.

Companies like Reaktor Space Lab in Helsinki, Finland, are betting that data of all kinds are going to help farmers cope with the changes. In November, the firm launched its “Hello World” cube satellite, which orbits the Earth every 95 minutes.

The satellite, which is in its proof-of-concept phase, includes an on-board imager that detects the full spectrum of light. That means it can analyze soil nutrients, moisture content and chlorophyll levels in plants. While big government satellites can carry $300 million pricetags, and are costly to rent time on, the lunchbox-sized satellites will only cost $1 million to $2 million, lowering the cost of imagery from satellites.

The daily satellite imagery used by Scherman at his farm outside of outside Battleford, Saskatchewan, lets farmers see their fields at a resolution of three to five meters per pixel. “You get a situational awareness of your fields within the day,” said Zara Khan, Planet’s product marketing lead for agriculture, which allows farmers to respond quickly to weather events.

Scherman, meanwhile, offered a one-word assessment of his new tools: They’re "awesome," he said, adding that he uses them after extreme weather to have confidence that he caught all the damage. With satellite imagery, he said, damage can be assessed quickly in real-time, helping him get quick and accurate insurance payments.

The push to bring such high-tech solutions to individual farmers is increasingly important, said Jim Block, chief meteorological officer at DTN, a Minnesota-based analytics firm that serves a wide variety of industries.

Rains recorded at a nearby government weather station can be 20 percent more or less than what a farmer’s field gets, Block said, a disparity that can have significant consequences on daily decisions about applying fertilizers or chemicals to crops.

"Farmers are so resilient, we’ve known we can never control mother nature, so you just have to work with her,” said Debbie Borg, a farmer in Allen, Nebraska, by telephone. “With the technology that’s come out, it allows us to do that better.”