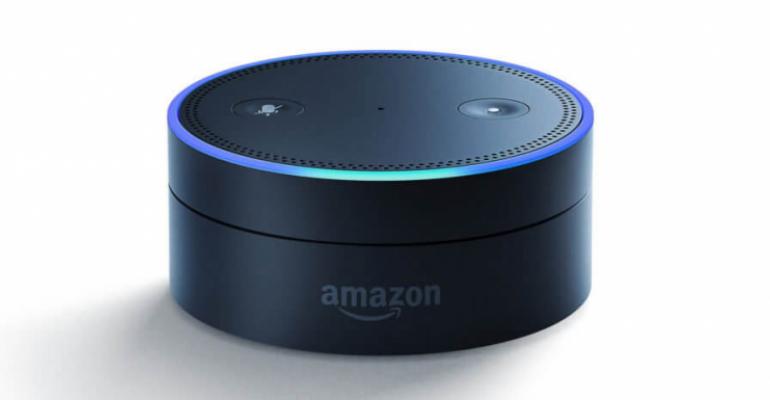 The Echo Dot that sits on the desk of my home office does a lot more than just order paper towels and tell me the weather forecast.

It’s turned into a second  brain that’s ready to help spell out a word, suggest synonyms, and answer questions about topics that I’m writing. While speaking instead of typing may sound like the newest form of digital-enhanced laziness, it’s actually turned into a way to work smarter.

It’s not that Alexa is doing the thinking for you. Instead, putting your Echo to work in this manner is all about efficiency. It allows you to get quick answers to questions instead of the distraction and workflow derailment that can sometimes happen when you open up a new tab. Anything that grabs you before you jump down the rabbit hole is extra valuable.

Skill #1: Get Alexa to check the spelling of a word.

How to do it: Say, “Alexa, how do you spell miscellaneous.” You’ll get a read out. “Miscellaneous is spelled m-i-s-c-e-l-l-a-n-e-o-u-s.” Simple, effective, and a real time saver.

How to do it: If you don’t want to just reuse the same word or you’re trying to differentiate your verabe, give this a try. Say, “Alexa, what’s a synonym for effective?” and you’ll hear some choices. Sometimes you’ll only get one options, while other times you’ll get a batch of suggestions.

Skill #3: Get a definition.

How to do it: Don’t be that person who embarrasses themselves by trying to sound clever and using a word incorrectly. The output is pretty easy. Just say, “Alexa, what’s the definition for context?” and you’ll hear the answer.

How to do it: Next time you want to share something with the colleagues in your Slack channel, you can do it through voice. The magic happens thanks to the Chat Bot for Slack skill. It’s a little limiting in its current form - I found it misheard a lot of words and it’d only let me post in the main channel. However, it points to a future where you may be able to speak your thoughts while charging ahead on a current task.

Chat in Slack without touching the keyboard.

How to do it: Sometimes you just want to know what a term means or perhaps get some quick background about a topic without risking the distractions of a Google search.  So just ask Alexa a question, and in most cases you’ll get an answer. For example, I queried, “Alexa, when was the first Mac released?” I got the answer: “Mac’s launch is Tuesday, January 24th, 1984.” So Alexa had the right information, but clearly needs some work with the grammar.

Alexa knows quite a bit, you just need to ask to find out.

How to do it: One of my favorite skills is Ambient Noise: Ocean Sounds. It’ll put the soothing sounds of crashing waves and water collecting on the sand. If thunderstorms are more of your thing, then check out the Thunderstorm Sounds skill. There are several other skills that offer to make your office a relaxation station, so browse through the skills store if this is the effect you’re after.

How to do it: Sometimes you want to go straight to the source. Wikipedia is usually a good one if you want an answer to an obscure topic or need to dive into a topic in history. As an example, you can ask something like, “Alexa, Wikipedia, who is Punxsutawney Phil?” Alexa will then read out a brief summary from the Wikipedia article. Since some general knowledge queries to Alexa don’t always produce an answer (I find that this is one regard in which Google Home is superior) then you may have better success going right to Wikipedia.

How to do it: Just tell Alexa how long you want before a timer goes off. I’m not necessarily a devotee of the Pomodoro Technique, but there are times when setting a timer might help you stay focused on a specific task. If you’re prone to the occasional power nap, then your Echo will be there to sound the alarm so you don’t snooze away the day.

How to do it: Alexa can solve most basic math problems. This helps if you’re working on a project where you want to perform a quick calculation or otherwise check your math. It may sound lazy, but it’s sure made the invoicing process faster and it just might for you as well. As an example, you can just speak, “Alexa, what is 175 plus 38 plus 77 plus 19?” and she’ll quickly give you the answer (it’s 309).

How to do it: You’ll need the CoinFlip skill. I find sometimes I don’t feel like making a decision after a cognitively draining day of productivity. So the best solution thing to do is just go for the ol’ coin flip. All you have to say is, “Alexa, flip a coin” and you’ll hear heads or tails.