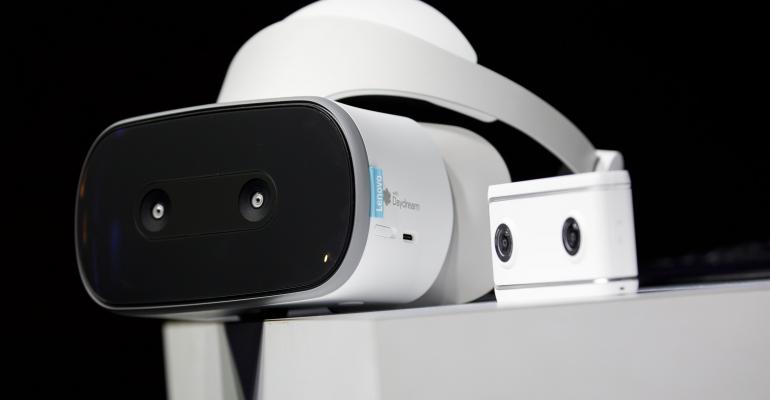 (Bloomberg) --Virtual reality devices are still mostly purchased by a niche market: gamers. Google wants to change that. The Alphabet Inc. unit released a new VR headset with Lenovo Group Ltd. on Tuesday, along with specialized cameras to support the technology.

Google showed off the new headset, dubbed Mirage Solo, at the CES consumer electronics conference in Las Vegas. It has features from high-end VR devices, like displays that don’t blur as the wearer moves around, and doesn’t need to be tethered to a PC. Those shortcomings have been a major hurdle to broader VR adoption.

Google’s new cameras are meant to address another handicap. The devices, called VR180, are built to encourage people to capture 360 degree footage that can be viewed inside VR devices. So far, the media library for VR is relatively thin, due to the high costs of shooting and creating content. "Watching VR180 gives such a strong sense of presence that it’s almost like having a time machine that lets you be there all over again," Clay Bavor, a Google vice president, wrote in a blog post.

Both the cameras and the new headset are built to feature Google services, such as YouTube, its digital maps and app store. In VR, Google is competing with Facebook Inc. to become the go-to media provider. Broader use of VR headsets, beyond gaming, won’t come until 2021, according to an analysis from Bloomberg Intelligence. Many analysts expect the market for augmented-reality devices -- which overlay digital images on the physical world -- to eventually outpace VR.

Google and Lenovo said the new device will arrive during the second quarter of 2018. Bavor said it will cost less than $400.