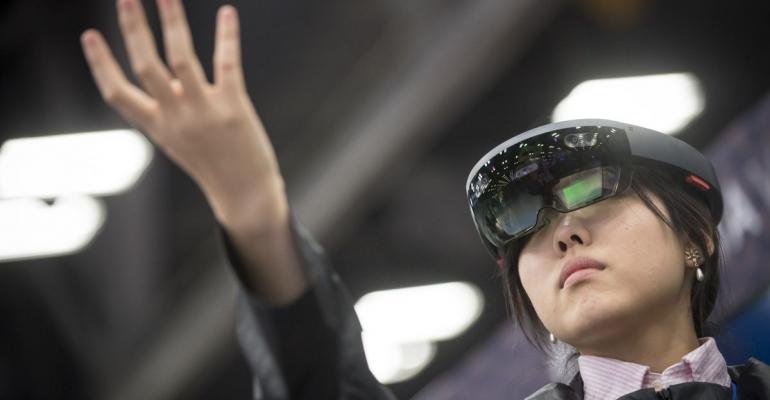 Microsoft is pitching the goggles as a tool for workers rather than consumers, envisioning it for tasks such as visually guiding factory workers as they learn new jobs or helping architects design buildings. Education company Pearson Plc and Koninklijke Philips NV, a health technology provider, are testing the new devices.

(Bloomberg) -- Microsoft Corp. is introducing an improved version of its HoloLens augmented-reality goggles and lowering the price, as it tries to develop a bigger business selling the devices to corporate customers.

At $3,500, the HoloLens 2 with a wider field of view and easier controls than the original is still an expensive piece of gear, but it’s less than the $5,000 cost to commercial users for the first version. The company is also selling the device, which lets users view, move, speak to and interact with 3-D holograms, via a monthly subscription along with a related software app.

Microsoft is pitching the goggles as a tool for workers rather than consumers, envisioning it for tasks such as visually guiding factory workers as they learn new jobs or helping architects design buildings. Education company Pearson Plc and Koninklijke Philips NV, a health technology provider, are testing the new devices, and the U.S. Army in November awarded Microsoft a $480 million contract to supply HoloLens prototypes. About 50 Microsoft employees on Friday demanded the company abandon the Army contract, saying in a letter to company executives that they “did not sign up to develop weapons, and we demand a say in how our work is used.”

Philips has been working with Microsoft to coordinate HoloLens with the health company’s Azurion system for guiding surgeons during minimally invasive procedures. Philips makes machines that help surgeons move tools through the body as they make tiny incisions to remove tumors, for example. HoloLens might be used to do things like provide a three-dimensional view of blood vessels, give each member of the surgical team a personalized data screen in their field of view and control the Azurion machine with voice commands.

“When you’re driving a car, you want to keep both hands on the steering wheel and your eyes on the road. When I am working on a patient I want to keep my hands on my instruments and my eyes on the patient,” said Atul Gupta, chief medical officer for image guided therapy at Philips. “Technology like HoloLens 2 has finally caught up with our vision of what we wanted to do with mixed reality or augmented reality.”

Microsoft unveiled the new device Sunday at the MWC Barcelona. Speaking during the product’s launch, Microsoft Chief Executive Officer Satya Nadella said Microsoft had a responsibility to be a “trusted partner” for companies using its products, such as HoloLens, and that businesses and institutions shouldn’t be dependent on the tech giant.

“The defining technologies of our times, AI and mixed reality, cannot be the province of a few people, a few companies, or even few countries,” he said. “They must be democratized so everyone can benefit.”

Microsoft Technical Fellow Alex Kipman said Mozilla’s open-source web browser Firefox would be made available for HoloLens as an alternative to the company’s Edge browser. Epic Games, creator of smash hits Fortnite and Gears of War, also used the event to announce it’s making its Unreal Engine development tools available to software-makers from May.

Unlike virtual-reality goggles, which block out a user’s surroundings, the augmented-reality HoloLens overlays holograms on a user’s existing environment, letting them see things like digital instructions on complex equipment. Facebook Inc., Magic Leap Inc. and Alphabet Inc.’s Google have products for virtual or augmented reality, but it remains to be seen whether anyone can turn the area, which Microsoft refers to as mixed reality, into a big money maker.

Microsoft is focusing on corporate customers with HoloLens, and is trying to make the devices more useful right out of the box with prepared applications, rather than require months to write customized programs, said spokesman Greg Sullivan. The company has also added Azure cloud software that can be used to better run augmented-reality features in devices like iPhones and Android phones. That could let Microsoft garner revenue from other companies’ devices and from the consumer market. For example, the company plans to promote the cloud services to video-game creators at the Game Developers Conference in March in San Francisco.

HoloLens 2 more than doubles the field of view from the previous version, which many reviews said felt too narrow, causing holograms to disappear partly or completely when users moved their heads. Microsoft’s engineers had to drop LED technology because it cost too much to expand the field of view, Sullivan said. Instead, they invented a new system based on dual quantum well lasers and an oscillating mirror.“People said you couldn’t do it,” Sullivan said about the visual technology. “And the team said ‘hold my beer.’”

There are now more ways to control the holograms via gesture instead of one, somewhat unnatural, exaggerated finger tap that controlled the previous version. The new model tracks a user’s gaze and lets them trigger actions by looking at a hologram. Users can also grab, rotate and resize the holograms with their hands as the device is powered by a new processor that includes an artificial intelligence chip Microsoft developed. That chip also gives the goggles a better idea of what’s going on in a user’s surroundings, differentiating a sofa from a floor, for example, and glass walls from brick, key information that developers writing apps can employ for better controls and more immersive experiences, Sullivan said.

The company also rebalanced the weight of the headset because some users complained the previous version was heavier at the back of the device, a problem given that Microsoft is selling it for factory workers or surgeons who’d wear it for hours at a time.