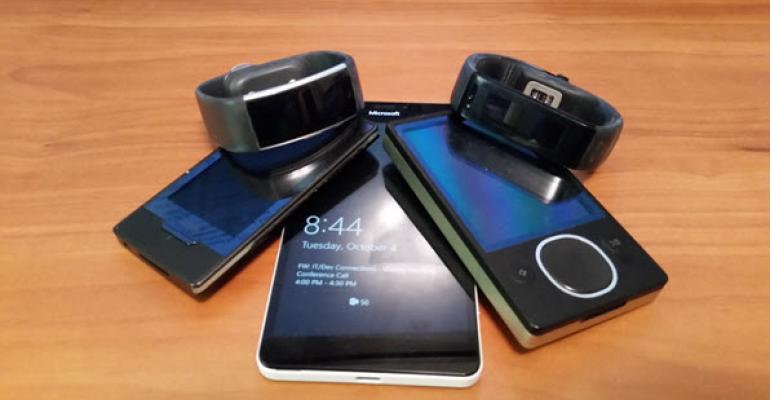 I’ve written a lot about the Microsoft Band over the past couple years and despite a few shortcomings here and there have been generally happy with its features. The device has been surprisingly comparable to the bigger fitness wearable names and costlier devices from the likes of Garmin, Fitbit, and others. Fortunately, I’ve written about the Microsoft Band in relation to it being an actual fitness device – so much of what I’ve written can be transposed to other fitness trackers. And, I will be doing that from here on out.

But, there are those that, despite the build-up of damning evidence over the last few weeks, are still clinging to the idea that Microsoft may deliver a Band 3 at some point – maybe even next year. These people are similar to those still holding hope that the release of the mythical Surface phone will salvage a market that Microsoft’s CEO really doesn’t want his company participating in.

One of the most telling pieces of evidence for Microsoft’s exit (and, really it’s not even a gracious exit) from the fitness wearable market is the removal of its SDK – meaning, even if you wanted to develop an app for the Microsoft Band, you just can’t anymore.

We’ve been Zuned, baby, and it’s time to move on.

People ask me now: “what would you suggest as a Microsoft Band replacement?”

The short answer is this: anything from Garmin. The bigger answer is: it depends.

During my comparison testing of wearables over the past year, there’s one ecosystem that has proven the strongest, one company that is actively developing new solutions, and one wearable series that’s not going anywhere. Garmin is what I’ve chosen for myself as the bar from which to test all other devices from here on out.

But, Garmin is historically thought of as an athlete’s choice – not necessarily as a pedestrian, or casual fitness company, like Fitbit. But, Garmin is working on that. Clearly, a lot of Garmin’s offerings are more expensive. For example, my preferred device today is the Garmin Fenix 3 HR which runs right around $600. But, Garmin also has the vivofit 3 ($99) and the vivosmart HR ($150) that are very Band-like, but are waterproof, full-featured, durable, and offer battery life of 1 year and 5 days respectively.

Many have already started looking toward the Samsung Gearfit 2 as a Microsoft Band replacement since its looks so similar. Anecdotally, I labeled this device as a Microsoft Band copycat when it first released. But rumor suggests that it suffers from many of the same flaws as the Microsoft Band, i.e., battery woes, and poor material quality are a couple examples.

Others are giving Fitbit another go, but in my opinion, compared to the Microsoft Band’s capabilities, it’s a step backwards. I’ll explain why I think this in a future column I’m working on that rates wearables based on certain factors.

But, the bottom line is that, for Microsoft Band owners, it’s time to consider moving on. I’ve talked to many of you who have had your lives changed through weight loss and developing a more active lifestyle from the use of the Microsoft Band and it’s not time to give up now. I know some of you are already thinking that you’ll just let your Microsoft Band live out its short life on your wrist – and there’s nothing wrong with that. But, you should definitely start planning now which path you’ll take once the wristlet has outlived its usefulness. And, definitely plan for a future devoid of a Microsoft wearable.