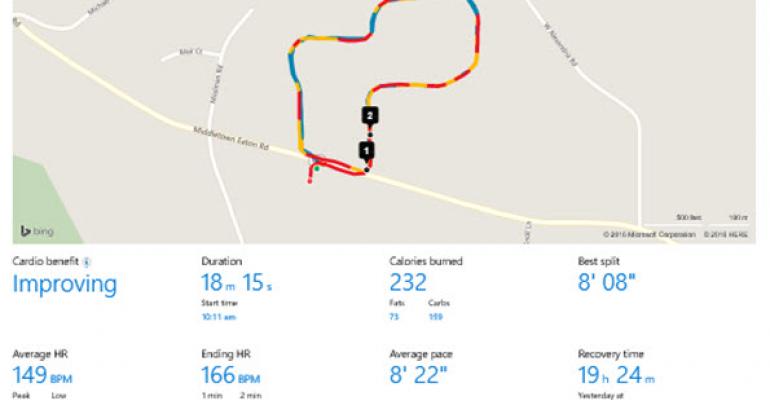 Microsoft recently delivered a firmware update for the Microsoft Band 2 that brought with it a few new features (read about those HERE). One of the new features that I’ve been particularly interested in testing is the GPS Power Saver mode that you can set for runs and bike rides (here’s how to Turn it On and here’s how it’s supposed to actually work.)

The feature is purported to supply an additional 4 hours of battery life for the Microsoft Band when enabled. That’s definitely a welcome improvement, but based on how the features works (it changes how often the Band samples GPS data), my biggest concern was accuracy.

For my test, I wanted to follow the exact same route, so I took my Saturday run at the local school where I knew I could get a good sampling of data. I also wanted to get enough data, so I decided that a 2-mile trek for each test run should give me enough information to compare. Additionally, I needed the route to be manageable and comfortable (a route I’ve taken before) so I could attempt to match pace for each sampling. And, finally, I wanted the run to be semi-normal, i.e., not crazy, curvy, or difficult to track - so I decided on a pretty simple loop.

This was my first GPS-monitored run since applying the new firmware, so the GPS lock took about 10 minutes. But, once it locked the first time after being updated, it only took a few seconds each time afterward. I see folks posting and complaining about this in the communities pretty regularly. This is a common occurrence when updating the Microsoft Band, and more documented proof that the Band does actually cache your location information. Additionally, when you make a huge location change (cross-city, cross-state, cross-country or cross-world), GPS lock will also take a while the first time, but will be cached for later runs.

So, my sampling runs on Saturday resulted in some interesting data as shown in the images. This is the exact same route for runs. I went to great pains to ensure that my footpath was identical.

Some key information to note from the results:

The Microsoft Band does recognize when GPS Power Saver mode is turned on and the Microsoft Health dashboard entry provides the following disclaimer: GPS power saver mode on. Route displayed is an approximation.

So, as you can see, there’s definite trade-offs when you use GPS Power Saver. If you’re low on battery, those trade-offs are probably worth it to ensure you get your activity tracked and stored in your Microsoft Health dashboard. However, if you have enough battery, I recommend not using GPS Power Saver mode. Over long distances the inaccuracy will be exponential.

GPS Power Saver should be a function that automatically kicks-in when battery level decreases to a certain percentage. My opinion is that that battery level is probably around 30%, unless that can also be configurable, i.e., some people might be power mad and want it to kick in at 50% or more. This would allow the Band to grab a more accurate account of the activity until battery level reached a critical juncture. It might never have to actually kick-in. I’ve had 2-hour GPS-monitored runs where battery level depleted to 40%. Even then I wouldn’t need the GPS Power Saver mode.

I’m not done testing, but wanted to share what I’ve found so far. I’ll be monitoring this feature for a while and will report back if I notice any changes.