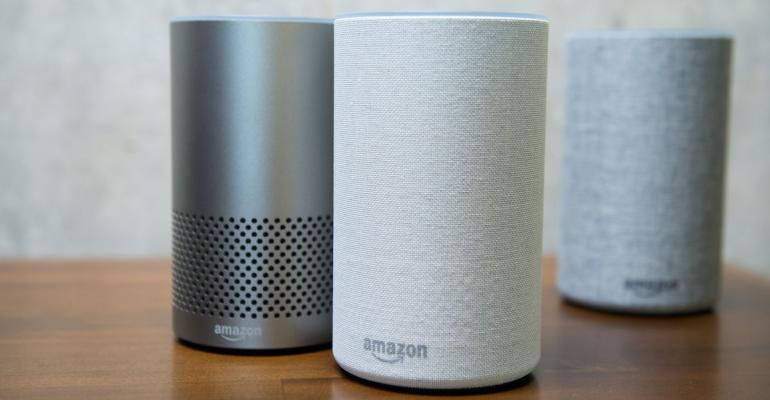 The bank and the e-commerce giant have partnered to provide JPMorgan’s Wall Street users with another way to access its research. Alexa is able to send analysts’ reports and related queries, and the bank is testing other features, like providing prices on bonds or swaps.

(Bloomberg) --“Alexa, ask JPMorgan what the price target for Apple is.”

It’s a request that JPMorgan Chase & Co. institutional clients can now get quickly answered through Amazon.com Inc.’s ubiquitous voice-activated assistant. The bank and the e-commerce giant have partnered to provide JPMorgan’s Wall Street users with another way to access its research. Alexa is able to send analysts’ reports and related queries, and the bank is testing other features, like providing prices on bonds or swaps, according to David Hudson, global head of markets execution for the New York-based bank.

Voice assistants are “clearly becoming something people are habituated to in their lives,” Hudson said. “It’s about taking information that’s somewhere in the bank, that someone has to generally go and look for, or which is time-consuming or requires authentication to get, and putting that to you in another channel.”

As clients’ habits evolve, firms have been finding ways to adapt popular retail technologies for the business world. While JPMorgan is one of the first to push the Alexa virtual assistant to institutional shops, other banks have been using the service in their consumer operations. And New York Life Insurance Co. is among financial companies building programs that use Alexa as a tool for employees.

Customers are becoming increasingly willing to use voice assistants to monitor accounts, according to a survey conducted last year by Bain & Co. While 6 percent of U.S. respondents now use the technology, 27 percent are open to it, according to the consultant.

Capital One Financial Corp. was the first bank to allow customers to manage credit card and bank accounts through the voice assistant, and the lender has slowly expanded its Alexa service, allowing people to ask questions like how much they spent on Amazon last week.

New York Life will start rolling out Alexa features to its 12,000 agents later this year to help them get quick details on policies and prepare for meetings, said Mark Madgett, who leads the insurer’s field force of agents. That means the agents can ask Alexa to figure out how much life insurance a customer has or the value of those policies, or to catch them up on the latest products the firm is offering, he said.

“This is a very complicated business,” Madgett said. “When I started 32 years ago, I had five products that I could help solve problems with. Today there are thousands of permutations around financial solutions.”

JPMorgan’s automated service, known in Amazon verbiage as a “skill,” is the latest shared project for the biggest U.S. bank and the world’s largest online retailer. Amazon already leases cloud-computing power to JPMorgan and has asked the bank to compete in creating new products including a small-business credit card for its customers. The companies are also collaborating on a health-care venture.

JPMorgan’s Alexa project started last year as part of an internal competition to foster innovation. The bank first opened up data in its research group and added feeds from other departments, including banking and custody and fund services -- capabilities now being tested internally. If the automated service takes off, it should free the firm’s salespeople from having to answer routine queries.

JPMorgan has seen that clients are open to new ways of interacting with technology. Not long after the bank created mobile apps for its trading business, it was recording large trades, including a $400 million currency bet last year. So allowing Alexa users to access JPMorgan data from wherever they choose to work -- home, office or on the go -- makes sense.

The next step is enabling institutional clients to act on the information they’re getting. In the not-so-distant future, Wall Street traders could routinely use Alexa to execute trades, according to Hudson. But the bank needs to do more work on client authentication and other security measures to prevent errant trades before that happens, he said.

“In the open-office environment, if you leave an Alexa on your desk plugged into an Amazon account, you might find a TV delivered tomorrow as a practical joke,” Hudson said.