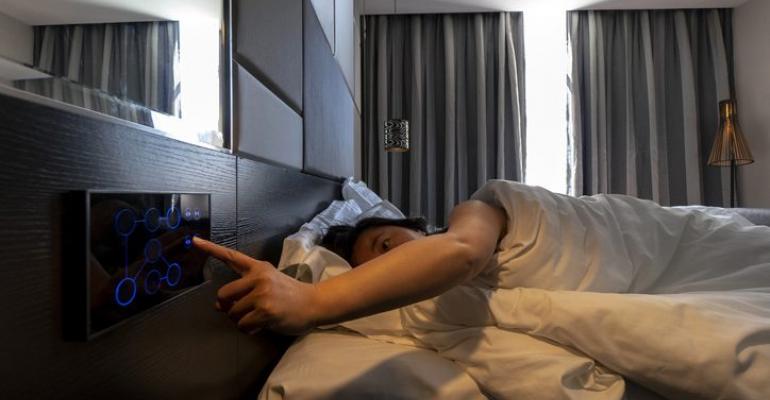 IoT Analytics: When Is a Truly Smart Home Arriving?

While the smart home market is still in its infancy, speech recognition has emerged as a vital if still-rudimentary technology.

Let’s be honest. The truly smart home hasn’t arrived. Yes, It’s fun to envision a future in which the tech companies supporting connected speakers and related devices offer a suite of services designed to make our lives more seamless. Imagine powerful computers leveraging sophisticated IoT analytics on thousands of personal data points: our work schedules, weekend plans, the optimal watering time for the plants in the front and back yard and dietary and entertainment preferences, as well as health and other metrics.

Time magazine envisions a utopian scenario a decade from now where a smart alarm sounds in the morning not based on the time you program it, but at the time it deems to be best for your schedule. After waking, it automatically turns on the shower at your preferred temperature. Later in the day, your smart home orders you drone-delivered cold medicine based on data from “health sensors embedded in your bathroom,” according to Time author Patrick Lucas Austin.

That vision, the latter part in particular, raises many questions: In a decade, will we be ready to sign over much of the control of our lives to tech conglomerates? Could a black hat hacker gaining access to such a system intended to optimize, ahem, micromanage, users’ lives treat targeted individuals like marionette puppets? Will we be prepared to authorize tech companies to make payments, unknowingly, on our behalf? Will we accept having bathrooms equipped with sensors to keep tabs on our health? If so, how might sensors in the bathroom, first, diagnose an upper respiratory ailment like a cold and, second, how might that technology work in a multi-family household or if there are guests visiting?

Putting the notion of corporations tracking bathroom-related data aside, it’s not clear currently what the term “smart home” even means, let alone how a virtual assistant would be able to get centralized access to our data to perform the analytics necessary to guide every step of our lives.

“Laughable” is the word Dan Granger, chief executive officer of ad agency Oxford Road, uses to describe the current capabilities of voice technology from standard-bearers Amazon, Google and Apple, which have a market cap exceeding $2.5 trillion. While voice-based user interfaces could transform our lives similar to how Google revolutionized search in the late 1990s and early 2000s, current-era voice-recognition is more like Ask Jeeves, Granger said.

But a confluence of factors, ranging from falling computing costs, the dawn of faster networking technologies like 5G and Wi-Fi 6 could supercharge the IoT analytics used in smart home devices.

Still, it may be too early to tell just when that might happen. It’s not clear how the organizations driving the smart home vision forward can centralize the data in a way that persuades users to shrug off privacy concerns.

And then there’s the question of how profitable the technology is. At present, Amazon and Google have entered something of a pricing war with their respective smart speakers. Just recently, Amazon had its entry-level Echo Dot on sale for $22. Even if Google and Amazon eke out an incremental profit from the hardware, they must support data centers and machine learning initiatives to enhance their accuracy. According to Bloomberg, Amazon reportedly employs thousands of workers to transcribe and annotate recordings captured by its smart speakers so the Alexa software can continue to improve.

And then there is 5G, which could possibly be a boon for voice technology and the smart home at large, although it is too early to tell if and when it will live up to the hype. “Sometimes, the first wave that you think is going to be the one that changes everything is not, and then everybody gets their expectations reset, and the second wave works,” Granger said. But the notion of 5G being 10-to-100 times faster than LTE could potentially lead to a new wave of advanced consumer-facing IoT devices designed to work in concert. “You might see major manufacturers of the Internet of Things starting to bundle things or have specialized installers who can set it up for you,” Granger said. “But the question is, are you really going to use it? And are you really going to be able to trust it?”

While privacy questions tend to accompany discussions around smart speakers, the convenience and whimsy they offer has persuaded a substantial portion of the public to scoop up at least one. More than 50 million Americans own at least one smart speaker, while half of those have more than one.

Granger expects the majority of the public will eventually shrug off privacy-related concerns related to devices like smart speakers. “I think it’s funny. When you talk to people about the smart speaker, everybody’s paranoid. They say: ‘I don’t want that thing in my home,’” but give the smartphone a pass even though it geolocates users’ position throughout the day. “We’ll always have holdouts, but I see people not talking about [privacy considerations of smart speakers] anymore. I see them just basically giving up like they have on the internet. You reach this critical mass of ease of use when the technology stops frustrating you and when you see you can do something much more efficiently than you could before. That’s when you let go of those concerns.”

It may be too early to gauge the potential impact of 5G in terms of smart home, and smart speaker, adoption. While in the relatively near term, it is possible telcos will step up efforts to market integrated 5G modem-routers as a replacement for traditional home broadband. Verizon and T-Mobile began such an initiative early this year.

When consumers will see lightning-fast connectivity (10 gigabits per second, which is 100 fold faster than 4G) with ultra-low latency (down to 1 millisecond) is unclear. In the United States, fixed networking infrastructure continues to trail advances in mobile connectivity, “resulting in a bifurcated system ill-equipped to handle the demands of 5G communication,” as a Data Center Knowledge article explains. For 5G to live up to its potential would require upgrading fixed backend networking infrastructure, which is a subject receiving less attention at the moment than upgrading the wireless spectrum.

There is also the risk that intersecting emerging technologies like 5G and the smart home can inspire a sort of technical infatuation from engineers that results in an emergence of smart home gadgets that fail to solve concrete problems. “Ultimately, it is not the data communication, the sensors, the ways things are connected that makes a difference,” said Cees Links, general manager of the low power wireless business unit of Qorvo, an American semiconductor company in April. “What makes the difference is the application.”

While 5G is perhaps not a make-or-break technology for the smart home in general or IoT analytics in particular, the technology, if it holds to its promises, could help move voice computing beyond its rudimentary current state.

Smart speakers are one of the fastest-growing categories within the IoT landscape. “Nowhere more importantly than here does the master data set need to continue to collect information so that it can have a greater percentage of recognizability on everything that you say to it,” Granger said.

Last December, Loup Ventures found the current winner in terms of accuracy to be Google Assistant, which flawlessly understands — in the sense of transcribing — hundreds of questions and answered 87.9% of them correctly.

Once voice technology comes close to being able to understand and answer 100% of even routine queries accurately could lead to a sort of tipping in point in terms of consumer trust, according to Granger.

“And hopefully, if 5G is anything like what’s been promised, it’s going to bring it there a lot faster, because the machines themselves are going to be able to learn and adapt in ways that they haven’t been able to,” he said.

Right now, the current state of speech recognition and smart-home analytics leaves us with technology that, though groundbreaking in a way, is rudimentary in many others. “It’s like using MapQuest versus using Waze,” Granger said. “Right now, [with current smart speakers] we’re still using Mapquest. Is it better than the atlas in your car? Yeah, but it’s just not interactive enough. And if you take a wrong turn, it can’t necessarily get you back on track very easily, and in fact, you might get more lost than you were,” he said. “I’m in the camp of optimists who are hopeful that 5G is going to be a major forcing function in changing that experience.”