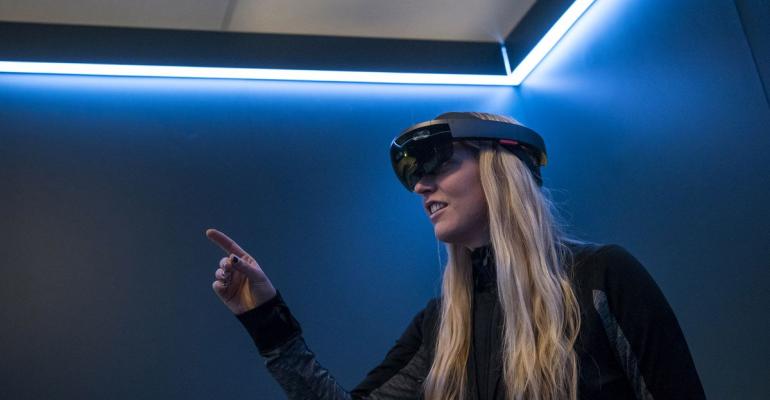 Alphabet, along with Microsoft Corp. and a slew of startups, are bringing so-called wearables back as part of a push to make warehouses and manufacturing more efficient with the help of technology.

The vaunted debut of the company's computerized eyewear six years ago was one of Silicon Valley's more spectacular flops. Deemed too awkward and pretentious, early users were disparaged as "glassholes" by a critical public. Parent company Alphabet Inc. quickly retired the product.

Now it seems it was just a case of wrong time, wrong place.

If consumers aren’t quite ready to sport eyewear that uses voice commands to browse the internet or hold video conferences, workers on the factory floor are. Alphabet, along with Microsoft Corp. and a slew of startups, are bringing so-called wearables back as part of a push to make warehouses and manufacturing more efficient with the help of technology.“The hands-free aspect is what’s really revolutionizing our approach here,” said Michael Kaldenbach, head of digital realities for Royal Dutch Shell Plc. “We’re shifting from the speed of your thumb to the speed of speech.”

Wearables -- whether taking the form of eyewear, wristwear or headgear -- boost productivity by giving multi-tasking employees more flexibility to do their jobs without juggling a handheld iPad or laptop. The computer-powered accessories give workers a significant advantage.

Lockheed Martin Corp. recently adopted Microsoft's HoloLens for manufacturing spacecraft. Donning what looks like a pair of heavy duty safety goggles with a black band wrapping around the head, a technician can use images projected onto the lenses to mark the locations for 309 fasteners to be attached to a curved panel. When the technician or the panel moves, the computer adjusts.

The $3,500 HoloLens reduced the task to a two-and-a-half hour job, down from at least two days when using traditional measuring tools, said Shelley Peterson, who leads Lockheed's emerging technologies division.

“We’re seeing a return on investment in the first use,” she said.

The key to commercial success, say product developers, is to augment reality, not replace it. Users can still see the real world while referencing the virtual world whenever they need it. Once workers become comfortable with -- even reliant on -- wearable computers on the job, they'll carry them over into their everyday lives as well, is the bet.

Qualcomm Inc. makes computing chips that power the hands-free devices made by startup Realwear, which just sold 10,000 of its product to Finnish telecom company UROS Group.

Over the next decade, the technology will become compact and powerful enough to replace smart phones as the indispensable piece of personal technology, said Hugo Swart, who heads Qualcomm's extended reality division.

``In the long run, the consumer will drive the volume,'' he said. ``That will be the day when I may not even need my smart phone anymore. My smart phone becomes these glasses.''

There's still a ways to go before that happens, said Nehal Chokshi, an analyst with Maxim Group, who has studied the wearables sector and covers product developer Vuzix Corp.“Right now, we’re in the very, very early innings," he said.

Current devices are still cumbersome and lack the ability to be “truly immersive,” which limits their usefulness, Chokshi said. Makers are ramping up production to deliver thousands of the gadgets, but Chokshi sees potential for sales exceeding the 200 million personal computers sold every year, and eventually comparable to the 1 billion smart phones purchased annually.

“Three years from now, there’s a good chance the industry will produce a product that will have the form factor as well as the usability and immersiveness that can tip it toward'' that inflection point, he said.

Like a lot of technology, wearables got started in the military. Members of Special Forces wanted to replace the laptops they lugged around and pushed for a wearable computer that resembled sunglasses, said Paul Travers, chief executive officer of Vuzix. He cobbled together his company in the 1990s from makers of computer headgear, including a clunky device that resembles a helmet with opaque ski googles attached.

Advances in the sensors, software, screens, batteries and other elements has finally caught up to the vision. Vuzix now sells the Blade: basically, a pair of glasses with a floating screen on one of the lenses.

Google has now relaunched its glasses for commercial use. Customers so far include DHL’s supply chain unit, Sutter Health, and farm-equipment maker AGCO Corp., according to Jay Kothari, who leads the project. Companies using Glass report efficiency gains of between 20% and 50%, Kothari said.

Some product makers are targeting their wearables for heavy industrial users. After field-testing 40 ruggedly designed Realwear devices in its operations around the world, Shell has decided to deploy thousands more at 24 sites in 12 countries.

The gadget -- costing about $2,000 apiece before bulk discounts -- resembles a heavy-duty phone headset to be worn around the neck or clipped to a hardhat. A small screen can swivel in front of one eye, projecting an image comparable to a 7-inch screen. But it weighs three-quarters of a pound -- significantly heavier than a normal pair of glasses.

Still, wearables are a huge improvement for field technicians who no longer have to balance a tablet on their knees or take their gloves off each time they need to type out a message to a colleague, said Shell’s Kaldenbach.

One example: Workers can use the headgear to video call experts for a consultation on fixing broken equipment in the field -- the expert can "see" through the eyes of the onsite worker, and even project drawings on to the workers' eyeglass screen.“It’s no longer fluff,'' Kaldenbach said. ``It’s actually a practical solution.”