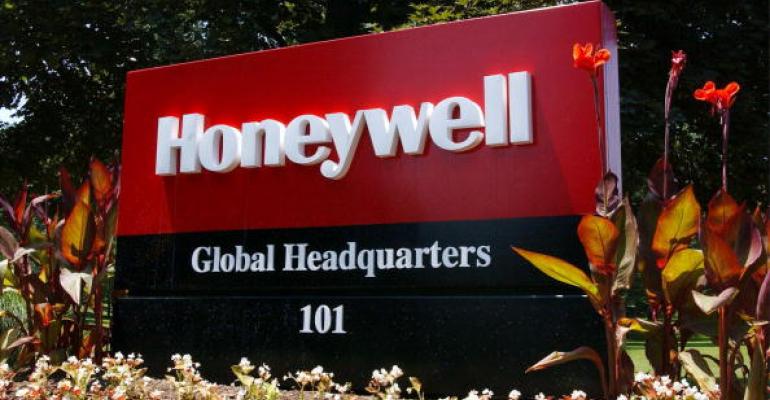 Delayed Flight? Honeywell May Have a Fix

Honeywell has a vision for using technology to improve air travel and stake out a leading position in the burgeoning field of connected aircraft.

(Bloomberg Opinion) -- Honeywell International Inc. CEO Darius Adamczyk isn’t the type to play the hype man, so when he says he’s “extraordinarily excited” about something, it’s meaningful. Those were the words he used earlier this year to describe Honeywell’s vision for using technology to improve air travel and stake out a leading position in the burgeoning field of connected aircraft. It’s Kristin Slyker’s job to make that happen.

Slyker, 44, leads the company’s efforts to sell antennas that enable satellite communications, high-speed in-flight WiFi service and software that can improve fuel efficiency, predict maintenance needs and help pilots plan flights. It’s a job she says she never would have envisioned for herself when she joined the company more than 16 years ago in an information-technology role. Having grown up in the Phoenix area, where Honeywell Aerospace’s headquarters are located, she graduated from Arizona State University’s W.P. Carey School of Business with a degree in computer information systems. But with a father who served in the Air National Guard, airplanes were an important part – and occasional playground – of Slyker’s childhood.

“This job brings it full circle,” Slyker, vice president of connected-aircraft customers and partnerships, said in a Dec. 4 interview on board Honeywell’s Boeing Co. 757 test plane as we circled the Grand Canyon. The plane, stripped of most passenger accoutrements save for a dozen or so seats, now serves as a flying laboratory for Honeywell’s latest innovations. These include its GoDirect software services and connected radar that crowdsources information from other planes, satellites and ground systems to give pilots a more complete and accurate picture of the weather.

One reason Slyker may not have envisioned her job is that it didn’t officially exist until early 2017, when Honeywell Aerospace CEO Tim Mahoney established connected aircraft as its own business and tapped her to lead it. Connectivity is in Honeywell’s DNA: the company has been enabling cockpit satellite communications since the 1980s, and has a long history with radar and flight-planning services. The turning point for converting its connected-aircraft aspirations into a full-fledged business was when it gained the ability to pair those traditional offerings with big-data mining and real-time information, Slyker says. The market also had to be ready for next-generation technologies.

Buzzwords like “connected” and “digital” tend to translate as “overplayed” and “expensive” to industrial investors bruised by General Electric Co.’s poorly executed foray into software. Honeywell has pitched its connected-aircraft business as a means to make its aerospace unit, the company’s largest, less vulnerable to economic slumps. Demand for connectivity upgrades and software services isn’t dictated by flight hours or gross domestic product to the same extent as new plane purchases and traditional repair work, Ben Driggs, president of services and connectivity at Honeywell Aerospace, said in an interview. The big question, as it was for GE, is whether this can be a new source of revenue for Honeywell or if these investments are simply necessary to maintain its hold on high-margin maintenance work, says Scott Davis, CEO of Melius Research.

It’s easy to understand the business model for Honeywell’s JetWave equipment that enables reliable WiFi even over oceans. The company also sells access to that connection via a distribution agreement with satellite communications operator Inmarsat Plc. In an increasingly connected world, the ability to be plugged in and entertained at all times holds appeal for passengers – and for the airlines that can charge them for that service. The less tangible part of Honeywell’s connected-aircraft push is the idea of using data harvested from plane parts to improve operations. United Technologies Corp.’s $30 billion takeover of avionics maker Rockwell Collins Inc. is a bet that scale will help it get ahead in connected aircraft, but Honeywell is prioritizing quality over quantity. What works in Honeywell’s favor, Davis says, is its bottom-up mindset.

The company starts with a known problem – like the delays passengers can face while an airline tracks down a fueling truck from the other end of the airport – and then tries to find a way to solve it via software and data analytics. In this case, it’s Honeywell’s GoDirect Ground software, which uses data scraped from fueling and baggage-sorting trucks to give operators better awareness of how their fleet is being used, allowing them to allocate vehicles more efficiently and improve turnaround times. It sounds simplistic, but it’s easy to spend a lot of money in software and wind up with offerings people aren’t willing to pay for. “I’m not going to build my infrastructure in the hope that I’m going to find a problem to solve,” Slyker said. “I’m building my infrastructure to solve the problems I know exist.”

She has unique insight into what those problems are. Before coming to Honeywell, Slyker worked in programming and program management at Accenture with a focus on the oil and gas industry. She drew on that background at Honeywell as she transitioned from IT, working first with the team that decided what next-generation business jet technologies the company should invest in before eventually handling planning and controls for the commercial-aviation business’s $1 billion annual research and development budget. She also spent about four years as vice president of commercial-customer operations for Honeywell’s integrated supply-chain team, which is a fancy way of saying she had to manage cranky phone calls if deliveries didn’t show up or quality issues arose. This isn’t a job I envy, but it trained her to make customers’ needs the starting point for decision-making.

That mentality is paying off. Swissport International, the world’s largest ground-service provider, inked a deal this month to deploy GoDirect Ground across its operations. No financial terms were disclosed, but the 13 percent reduction in maintenance costs Swissport reported after applying Honeywell’s service across five ground-handling stations earlier this year was enough to entice it to sign up for a bigger project.

The benefit of Honeywell’s multi-faceted approach to connected aircraft is that it doesn’t necessarily need to earn billions of dollars in revenue from predictive-maintenance software to be successful in this industry. In addition to satellite antennas, Honeywell also sells a little gray box it calls the Aircraft Data Gateway, which gives airlines a way to securely and wirelessly transfer information on and off a plane. It’s what makes this whole idea of connected-aircraft and real-time information work, so you can see the appeal even for airlines that may prefer to build data-analytics capabilities in house. Honeywell’s predictive-maintenance offerings should also allow the company to save costs on its own repair work: if you know something will break ahead of time, it tends to be a more minor (and less expensive) fix.

All of this math is made easier by the fact that Honeywell hasn’t been throwing money around willy-nilly on software. Its connected-aircraft operations blossomed out of three acquisitions and, true to Honeywell form, they were niche and reasonably priced. The company bought wireless-connectivity company EMS Technologies for $491 million in 2011 and then paid an undisclosed amount to acquire fuel efficiency software-maker Aviaso and in-flight airtime provider Satcom1 in 2015. Contrast that with GE’s recent announcement that it will sell a majority stake in its ServiceMax field-technician software business to Silver Lake for seemingly a lot less than the $915 million it paid for it in 2017.

Connectivity is a squishy word that many companies abuse, but Slyker and Honeywell have a concrete approach to it that should pay off one way or another.