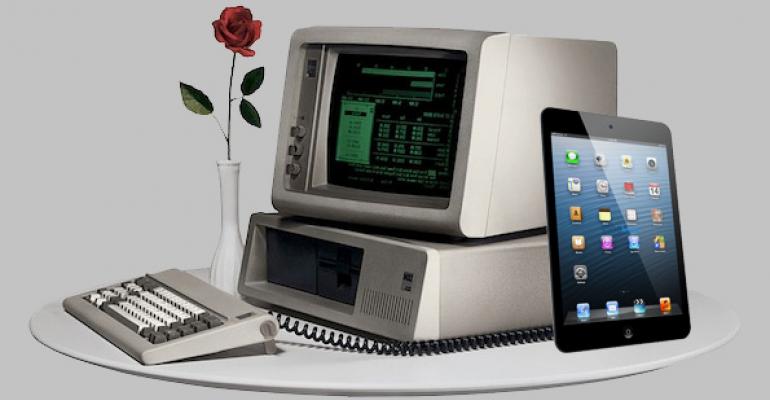 It’s Official: The iPad is a PC

Over the past few years many have struggled to categorize the iPad and the spate of tablet successors that have appeared in its wake. Indeed, I’ve spent more time pondering this question than most. But with a shift to simpler, more mobile, and more highly-connected devices like smart phones and tablets, PCs are increasingly only part of a bigger ecosystem of personal computing devices. And you know what means. Yep, the iPad is now a PC.

But don’t take my word for it. This edict was actually handed down by Microsoft, by which I mean Frank X. Shaw, who heads Microsoft’s communications. In a post to the Official Microsoft Blog this week, Shaw reflected on how his company’s move to devices and services was warranted by the shift I describe above. And he declared, once and for all, that yes, the iPad is a PC.

“Most of the people around me were using their iPads and other tablets exactly as they would a laptop – physical keyboard attached, typing away, connected to a network of some kind, creating a document or tweet or blog or article,” he wrote, describing his experience in the crowd at a tech conference. “In that context, it’s hard to distinguish between a tablet and a notebook or laptop. The form factors are different, but let’s be clear, each is a PC.”

Shaw argues that we as an industry often get caught up in semantics, which I absolutely agree with. That said, as a person who earns a living communicating as well, I think that words are important. And the ability to describe something simply is extremely important if you need to get beyond that thing and express an idea.

Because I write primarily about Microsoft and its products and services, the word “Microsoft” appears a lot in my writing. As a writer, I don’t like the repetition of words, and when I see it elsewhere—in news articles and fiction, too—it really stands out. So rather than construct sentences that read as “Microsoft, Microsoft, Microsoft,” I try to mix it up. So I’ll use terms like “the firm,” “the company,” and the like in a sentence in order to avoid repeating the word “Microsoft.” And in Microsoft’s case, I’ve often used the term “software giant” over the years to avoid repeating the word Microsoft in two subsequent sentences.

For example. “This week, Microsoft announced a new product of some kind. Never afraid of a little hyperbole, the software giant said this new product would change the world.”

For whatever reason, some people really hated this term. And I have similar terms for other companies I write about frequently. Apple is “the Cupertino-based consumer electronics company.” Google is “the only advertising giant.” Oracle is “completely irrelevant.” And so on. (Kidding on that last one.)

So the iPad is a PC, eh? Interesting.

Critics—Apple fanatics, mostly—often gleefully pull out old quotes of mine about the iPad because I was apparently uniquely clueless about how important this device would become. I’ve argued, however, that many people didn’t understand the importance of the iPad, and that I certainly wasn’t alone in struggling to both understand and define this device. Also, the iPad has improved over time and lost some of its initial failings. Prompted by accurate criticism that the iPad was only a consumption device, basically a giant iPod touch, then-Apple CEO Steve Jobs demanded that an iWork suite be made available in time for the iPad 2 launch so that these critics could no longer use this argument. (Source: The official Steve Jobs biography.)

Before that actually happened, I wrote an article, Understanding iPad, which was my attempt, at the time, to define this device. My conclusion, now obsolete, was that the iPad was indeed a new kind of device, exactly as Apple had claimed it was. The iPad, I wrote, was not directly comparable to an iPod touch or iPhone, to a netbook, or to a PC or even Tablet PC.

And give me a bit of credit, I did get this one right: “Google and its partners will simply ape the iPad model and release me-too computing devices that will no doubt undercut the iPad from a pricing perspective and, at first, offer a less compelling user experience,” I wrote three years ago. “Over time, and rapidly, Google will improve its Android system so that the slate experience gets better. How Apple responds to these changes will be a matter for history, but I expect them to do well, and to cut prices aggressively to counter this threat.” (OK, they never lowered prices, but the introduction of mini-tablets caused Apple to create its own mini-tablet, which lowered the entry price for the iPad lineup dramatically.)

But now the iPad is a PC.

Part of the reason for this change is that Microsoft hopes to undermine Apple’s “post PC” concept. After all, if the iPad is now a PC, there’s no such thing as a post-PC world.

Part of the reason is that people can legitimately use an iPad (or other full-sized tablet) as a PC replacement, since most of what people have done on PCs doesn’t really require the full power (or complexity) of a traditional PC. An even bigger group of people are using an iPad as a PC companion, just as they used netbooks previously. The netbook is a PC. So is the iPad.

“When you strip away all the post-PC rhetoric, maybe we’re all saying the same thing – the future is about killer devices connected to amazing cloud services,” Mr. Shaw concludes. “That’s the future Microsoft is embracing, and that’s the future that everyone here at the D Conference is excited about.”

I agree with all of that.

But man, are the next market share numbers going to be a blood bath.