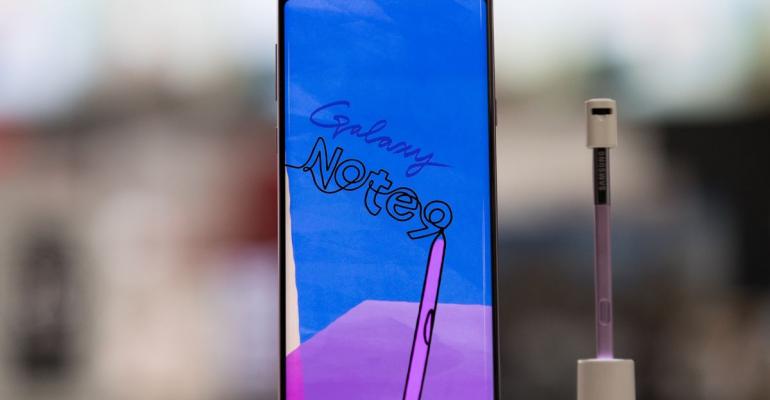 Onlookers will be forgiven for seeing the Max as a response to the popular Galaxy Note series made by Samsung Electronics Co. The latest in that line, the Galaxy Note 9, was released in August and has a 6.4-inch screen. Compared side-by-side, the massive similarities obscure a number of notable differences.

(Bloomberg) -- Apple Inc. introduced the world to its largest-ever smartphone Wednesday, the iPhone Xs Max. With a 6.5-inch screen, it dwarfs the 3.5-inch display on the original iPhone that Steve Jobs unveiled to the world in 2007. It’s also one of the biggest and most costly phones to hit the market, with prices starting at $1,099.

Onlookers will be forgiven for seeing the Max as a response to the popular Galaxy Note series made by Samsung Electronics Co. The latest in that line, the Galaxy Note 9, was released in August and has a 6.4-inch screen.

Samsung’s Note 9 is the lighter of the two phones, weighing 201 grams compared to Apple’s 208 grams. But the iPhone is about 13 percent thinner. A big contributor to this difference is the inclusion of Samsung’s stylus, or S Pen, which is stored within the Note’s chassis.

The accessory highlights one of the key differences between the two products, and for some consumers is more important than a fraction of an inch of screen size or depth. The S Pen can be used for handwriting, annotation, and precise navigation around the Note’s interface. In Apple’s world, this is a luxury afforded only to iPad users for the time being.

Another important difference concerns “the notch.” At the top of the iPhone’s screen is a small cut-out that houses the front-facing camera and other sensors. Some Android-powered phones have followed this trend but the Note 9 hasn’t. Instead, Samsung’s screen is an uninterrupted rectangle.

However, the so-called notch did little to harm sales of the iPhone X, which was the first Apple product to include it, and it’s an aspect that now differentiates two of the largest phones on the market. Behind the glass, each device uses a variation of the same screen technology — OLED, rather than LCD — which produces high contrast images and deep black levels.

Apple and Samsung’s models both include two camera lenses to the rear — one wide-angle, one telephoto — which capture pictures at a resolution of 12 megapixels. The setup lets users take sharp pictures from greater distances, or create a blurred background effect, known as bokeh, which historically was a quality confined to professional cameras. Both companies will argue their respective software and image processing technologies will produce better results, but to the majority of users the differences will be too little to sway a purchase alone.

As smartphones have become our mobile wallets and airline boarding passes as well as products for communicating, biometric security has risen to become a major selling point. Samsung has continued to use fingerprint sensors along with options such as iris scanning and facial recognition to secure its devices. But Apple has gone all-in on its Face ID advanced facial-based authentication, and disposed of its Touch ID system and associated hardware button. The iPhone system presents a single solution to biometric security, and the technology has proven itself to be effective and accurate. Apple says the iPhone Xs Max will recognize faces faster that its previous products, which may be attractive to shoppers.

Sometimes the answer to whether it’s worth moving from Samsung to Apple or vice-versa is the same regardless of which phones are being considered: can you be bothered (or afford) to re-buy all your favorite apps? This is no less true with the Note 9 and iPhone Xs Max. This alone may be a deal-breaker for many.

But the iOS ecosystem has recently expanded its already well-regarded catalog of apps to include advanced augmented-reality tools. You can measure furniture accurately thanks to the iPhone’s rear-facing camera array, and this has opened the door to home furnishing apps that can help users virtually place potential purchases in their apartments. The larger screen on Apple’s new phone is likely to make this an even more attractive area of software and e-commerce to invest in, and it’s not something Android-powered devices can universally achieve the same results with.

However, the Note 9 can do something far removed from anything its rival can currently offer, which is to become — for all intents and purposes — a PC. Using a cable, the device can be connected to a monitor and run desktop applications as would be expected on a laptop. A mouse and keyboard can be hooked up via Bluetooth. It’s still Android, not Microsoft Corp.’s Windows, but that could be enough for some people who want one device to rule all working environments. It’s an innovative and powerful feature that Samsung executes well.

One of the most controversial aspects of comparing an iPhone to an Android-powered device like the Note, is performance. There are huge numbers of variables, from the efficiency of the operating system itself and the speed and architecture of the hardware and memory, to the apps installed. But both Apple and Samsung’s flagships contain some of the most cutting-edge silicon available to mobile products, with specifications and raw horsepower that mirror — or exceed — those of many laptops. It’s because of this that Samsung’s desktop PC features, for example, are possible.

Apple’s hardware-software ecosystem is tighter than Samsung’s. The Cupertino, California-based company designs its own hardware, its processors, the software operating system, and strictly ensures third-party developers stick to its guidelines when making apps for consumers. This has historically been seen to give iPhones an edge in terms of performance consistency.

To the vast majority of users, however, the appreciable difference in speed and computing power between the iPhone Xs Max and the Note 9 will be negligible at best. It wouldn’t be wise to base a buying decision on this alone.

Samsung’s Galaxy Note 9 starts at $1,000, while Apple’s iPhone Xs Max will cost $1,099. Higher memory storage capacity options will push these prices higher still. They’re expensive, and they’re powerful. They represent some of the most advanced developments in mobile computing and industrial design, and the differences between them are not going to be obvious to many casual shoppers.

But the iPhone’s thinner design, and Apple’s focus on refining its software, imaging system, and wider hardware ecosystem, may enhance its attraction to average consumers as well as some enterprise users. Samsung’s greater emphasis on pure productivity, with the inclusion of the S Pen stylus and connectivity to desktop monitors for a PC-like experience, may appeal more readily to power users.

With Samsung and Apple’s latest top-of-the-line gadgets representing the pinnacle of their respective expertise, the user experience will be comparable, and a buying decision could well just come down to: “Do you want a gold one with a notch in the screen, or a purple one with a stylus?”