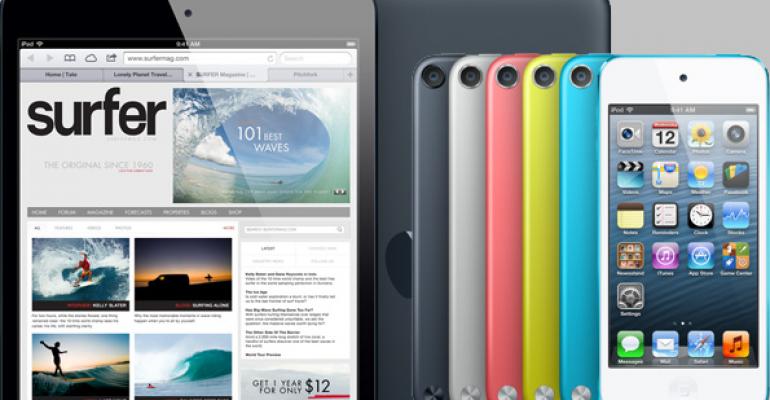 Apple's latest MP3 player and mini-tablet are both stellar

Folks, welcome to my secret shame. For the past several weeks, I’ve been using the new iPod touch, and for a lot less time, of course, the new iPad mini. Both products are demonstrably better than the competition—heck, the iPod almost has no competition—despite my long-time complaints about the underlying iOS software on each. There’s no way to overstate this: The new iPod touch and iPad mini are just incredibly desirable tech devices. They’re almost without peer.

Note: Some have misunderstood the point of my Compete Report articles. They are not meant to be in-depth reviews, or “complete” reports, but are rather overviews of competitive products from outside the Microsoft ecosystem. They’re a peek at the other side of the fence.

While Apple’s new iPods were almost an afterthought at Apple’s September launch event for the iPhone 5, the new iPod touch is arguably the sexiest product Apple has ever made. And yes, I’m including the iPhone 5 in that estimate. In fact, the iPod touch is a pointer to where the iPhone must be heading. It features the same gorgeous 4-inch Retina display with the same tall and thin widescreen 1136 x 640 resolution. But the iPod touch is even thinner than even the iPhone 5--.24 inches vs. .3 inches—and offers what I think is a nicer enclosure with colored metal backs.

The iPod touch is also lighter than the iPhone 5—3.1 ounces vs. 3.95 ounces—and is in fact so airy that it seems like it’s going to float off your hand. It really is something to experience.

There’s not much point in describing the software or ecosystem—iOS 6.x is what it is, and while I’m not a huge fan, it’s also backed by the biggest ecosystem of apps, content, and services imaginable—so this is a known quantity. What stands out with the iPod touch is the amazing thin and light form factor, the gorgeous screen, which is ideal for apps, audio and video content, and games—and the surprisingly rich sound reproduction. Apple bundles the touch with a mic-less version of the EarPods, which I love, and a weird, color-match “loop” handle that optionally attaches to the bottom back of the device. I leave that one at home, but it’s nice add-on for those who take pictures with the touch but are worried about dropping it.

Speaking of pictures, the touch’s 5 megapixel camera is surprisingly good and is in fact better than those in all but the newest smart phones. In fact, it’s certainly better than the camera in my Lumia 900. That said, Apple’s camera software is pretty bare bones: You can enable HDR and utilize a great new panorama feature, but there’s no way to adjust other settings, or switch to a widescreen shooting mode.

In What I Use: HTC Windows Phone 8X, I noted how that device has triggered an almost fetishistic need to continually touch the device, and the new iPod touch, though metal and actually a bit hard-edged on top, causes the same reaction. When you see it, you need to pick it up, and when you do pick it up, you don’t want to put it down.

Some have complained about the previous generation chip—it utilizes an A5 CPU instead of the newer A6 in the iPhone 5—while others note, somewhat accurately, that the $300 starting price is a bit steep, especially when you compare it to the $329 Apple is asking for the base iPad mini. (See below.) The first complaint is ridiculous: This thing screams, in my opinion, and has never lagged once. And while the new iPod touch is expensive in the way all Apple products are, it does come with 32 GB of storage—vs. 16 in the iPad mini—and is actually pocketable.

Basically, my usual complaints about iOS disappear in a haze of admiration for this device’s gorgeous form and incredible ecosystem. There’s no such thing as a no brainer in tech, but when you factor in that this device basically has no competition at all—the Android player devices are pretty terrible—the iPod touch comes pretty darn close. It’s awesome.

I assume by this point, you’ve heard of the iPad mini and understand the basic value proposition here: Stung by the low-end competition, Apple has shrunk the iPad 2 down to a 7-to-8-inch form factor that retains the classic Apple design, quality, and thinness, costs significantly more than the comparable competition ($329 to start vs. $200 for the Kindle Fire HD or Nexus 7), and is of course backed by the same ecosystem of apps, games, and content as are Apple’s other devices. Most have lauded the device itself but bemoaned the fact that the screen, at 1024 x 768, is both lower resolution (1280 x 800 typically) than the competition, and not widescreen.

I have a few thoughts about these issues.

First, however, I would reminder readers that when Apple first introduced the iPad, I complained that a smaller, 7-inch version would be the more appropriate size for such a device, assuming of course that you intended to use it as I do, as a consumption device. (That is, you’re not going to replace a laptop and connect a keyboard.) Through various Kindle Fire devices and, more recently, the Google Nexus 7, this opinion has held up. And now that I see Apple’s take on it—a slightly wider 7.9-inch variant of the 7-inch tablet—I’m happy to announce, for once, I told you so. This is the ideal iPad.

In fact, it may be the ideal mini tablet. Take that, Amazon and Google.

The stories you’ve heard about the vaunted build quality are true: The iPad mini is a gorgeous, gorgeous device. It’s thin and light and can really be held in one hand. I’m not a huge fan of the “diamond chiseled” edges, which I find hard to the touch. And while I know the back is in fact aluminum, it seems like plastic to me … Until you try to flex the device, which you can’t since it’s so stiff and well-made. The iPad mini is the BMW of the tablet world. It’s nicer looking and better made than the competition. In this case, you really do get what you pay for.

(In full devil’s advocate mode, please do remember that the Kindle Fire HD and Nexus 7 are in fact much better deals, financially. If you’re not independently wealthy, do consider those options too.)

As for the screen … I think we all agree that Apple will trumpet a Retina display-based iPad mini by next year and that they will be applauded for it. And I think anyone can look at specs and quickly decide that 1024 x 768 is a lower resolution than 1280 x 800. But here’s the thing. As was the case with the supposedly limited 800 x 480 resolution on Windows Phone for two years there, the screen on this new iPad is in fact beautiful. It is in fact not limiting at all.

To test this, I viewed a number of high resolution photographs—Microsoft’s Windows Personalization site is a great place to find such things—and watched the latest episode of “The Walking Dead,” in HD, side-by-side on the iPad mini and Kindle Fire HD. They were identical looking to me, absolutely identical.

Part of the reason the iPad mini screen works so well, of course, is that the iOS software was fine-tuned for 1024 x 768 two years ago. Part of it is that Apple upscales standard definition (and likewise downscales HD) video content to a near-HD tweener format to accommodate the screen resolution. Part of it is simply that Apple clearly knows what it’s doing when it comes to displays. So while you may opt out of the iPad mini because of the price (valid) or simply because you’re not an Apple fan (understandable, I guess, but perhaps less defensible), doing so because of the screen is, in my opinion, a mistake.

So here I go again: The iPad mini runs iOS, of which I’m not a fan. But the combination of the hardware—which is both beautiful and an ideal size—and the irreproachable content ecosystem simply puts this device over the top. Yes, the Amazon Kindle Fire HD and Google Nexus 7 are viable alternatives, and both are very good. But the iPad mini is the top of the heap. And if money is no object, I have a hard time recommending otherwise.

While some Apple products lend themselves to easy criticism, the new iPod touch and iPad mini are pretty incredible. Yes, the same pricing complaints arise, and of course both are based on the out of date iOS system, which, if I’m reading the tea leaves right, is about to change in hopefully remarkable ways. But the quality of these devices leaves me speechless. Both are beautiful, thin, light, and remarkably well-made. Both are market leaders. And yes, both are highly recommended. If Microsoft, Amazon, or Google intends to take on Apple in the markets in which these products compete, they’re going to need to step it up.