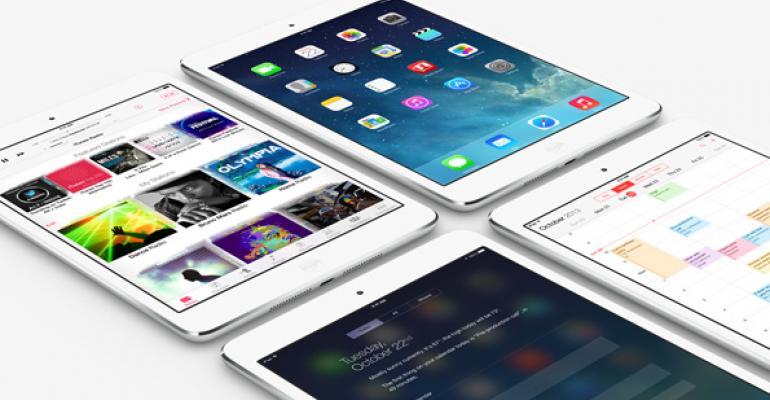 Near perfection at a too-dear price

Were cost no object, I'd tell you to buy an Apple iPad mini with Retina Display and call it a day: It features a gorgeous 4:3 better-than-HD screen that really works well in the mini-tablet form factor and is backed by the superior apps and digital media ecosystems. But cost is, of course, a daily reality, and Apple's too-high pricing puts this otherwise wonderful—near perfect, really—mini-tablet out of contention for most.

So why even review this device? After all, it could very easily have made the cut in Through the Cracks: Tech Products I'm Not Reviewing. Simple: Mini-tablets are hot right now, and everyone seems to want one. And the iPad mini with Retina display is absolutely among the upper echelon in this product category. In fact, if it wasn't for the price, it would stand alone at the top.

But before harping on the price—so negative!­—let's look at what Apple got right here.

The build quality is, as always, superb. Where the Windows and Android competitors show up with plastic of varying degrees of quality, the iPad mini is a unibody aluminum design with chiseled edges and metal buttons that just screams quality. And that's especially true when you examine the iPad next to virtually any other device. This one is night and day.

The performance is amazing across the board. You tap on something and it happens ... instantly. Battery life is of course superb.

The screen quality, likewise, is amazing, and the tiny device's 2048 x 1536-resolution makes for an impressive visual experience. And while this may be hard to grok at first, Apple did something very right with the display scaling: Instead of just "adding a row of icons" like it did with its iPhone 5x line of phones, the iPad mini with Retina display is just like every other modern iPad, with the same basic on-screen layout, just in a smaller size. The result, as Apple puts it, is a "concentration, rather than a reduction, of iPad." It's the right way to go for this kind of device.

As I noted in my "compete report" of iOS 7, I actually like Apple's new mobile OS just fine. Coupled with the biggest and best app store of any mobile platform and the stellar iTunes-based content store (which includes TV shows and movies, music, audiobooks, ebooks (through iBookStore), podcasts, and iTunes U-based educational material, and you've got a winner. Google Play Store is catching up, and Windows Store has years to go, but Apple's supporting ecosystem is still number one.

And then there's the iPad mini with Retina display's Achilles Heel: The price. It's ... problematic.

This device starts at $399 for a bare bones model with just 16 GB of storage and Wi-Fi connectivity, and you can spend $829 on one of these things if you just won the lottery or haven't yet come to grips with the evils of credit card debt. By way of comparison, a 16 GB/Wi-Fi version of the Google Nexus 7 is just $229, and a 7-inch Amazon Kindle Fire HDX (with ads removed) is $244.

So the iPad isn't just "expensive." It's expensive past the point of absurdity.

I'm willing to give Apple a price premium, just not that much. In this price range, $100 more than the competition is extortion, but I'd accept it. Anything over that ... is something else entirely. For the price of the cheapest iPad mini with Retina display, you could get a 32 GB Nexus 7 with LTE connectivity and still have $50 left over to buy apps, games and content. And that $399 Nexus 7 device would cost $629 in Apple form. Seriously?

Price isn't all that Apple got wrong on the iPad mini with Retina display, however.

Where the iPhone 5S includes the Touch ID fingerprint reader, a truly useful new feature (in a phone that is otherwise devoid of such things), the iPad mini with Retina display does not. (Neither does the iPad Air, and of course we can now safely predict that Apple's 2014 iPads will belatedly and obviously add this feature.) This is a big miss, especially for such a premium device: Once you've used Touch ID, having to repeatedly tap in a PIN to sign-in and your full iTunes password to approve purchases and so on—just seems old-fashioned and irritating.

Its speakers are ill-placed for stereo separation during games or videos, making all the sound appear to come from one side. Amazon's Kindle Fire HDX provides much better sound, especially for movies, where it creates a wonderfully spacial soundscape that emulates surround sound surprisingly well. The Nexus 7 does a better job of this as well.

In testing the iPad mini with Retina display, I was also reminded that Apple, alone among the Big Three platform makers—the other two being Google and Microsoft—charges a 30 percent vig on top of any third party online store purchases. So while many such providers have simply sucked it up, some big ones—like Amazon, with Kindle—have not because this charge would turn break-even sales into huge losses. So while the Kindle app on iPad is mostly excellent, there's no way to access the store, not even by a link to a web page. This isn't the case on any other platform, just iOS. On behalf of all the customers you share with Amazon, let me be among those to say: Thanks, Apple.

And while this may seem like a small thing, it amazes me that Apple hasn't figured out a way to prevent its once innovative Smart Covers and Smart Cases from leaving marks on the iPad screen. Anyone who spends several hundred dollars on an iPad mini is understandably going to want to protect this precious device, but Apple's own covers leave surprisingly visible linear streaks on the screen. They're really distracting and detract from what should be a luxury experience. It's like getting leather seats in a BMW any having them be ruined every time you use the seat belts.

If these complaints may seem like nits, then you're not expecting enough from a luxury product. Each in its own way undermines the quality of a device that could justify its high price by being truly excellent. By offering a Touch ID sensor only on a single iPhone model, Apple is denying users that purchase multiple products of a truly useful new feature. By forcing Amazon to pretend the Kindle Store doesn't exist, it's making iPad less wonderful of an ebook reader. And by marring the screens of ever device they protect, the Smart Cover and Smart Case just aren't that smart. It's too bad.

Apple users, of course, are used to putting up with this kind of thing. But if you're approach this from outside the bubble, at least know that the grass isn't always greener on the other side of that fence. Yes, Apple's devices are generally excellent, and the iPad mini is no exception. But you don't need to pay this much to get a great device. And we're at the point now with Android devices in particular, where the tradeoffs you need to make to "settle" for such a device aren't painful in the slightest. Mini-tabletslike the Google Nexus 7 and Amazon Kindle Fire HDX are much, much better values than any iPad. It's not even close.

Ultimately, the iPad mini with Retina display is a stellar device that just can't justify its too-high price tag, and I can't recommend something that is priced this far out of whack with reality. But if you can afford such a thing, you'll love it. At these prices, you pretty much don't have a choice.

For those of us living in the real world, the Google Nexus 7 is still the reigning champ in the mini-tablet class.