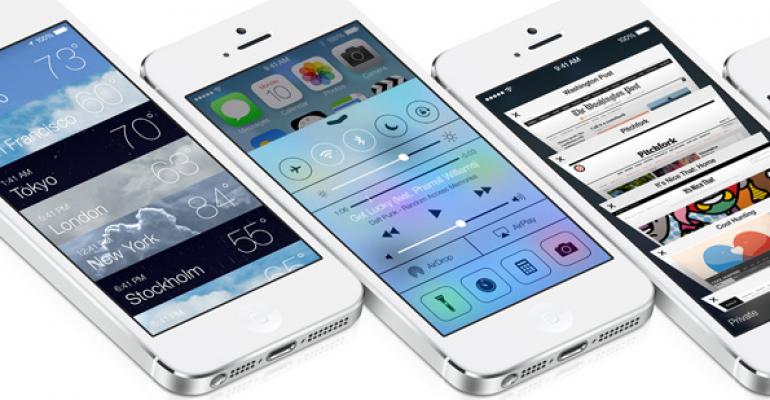 Apple on Monday introduced the first-ever major update to iOS, adding Metro-like typography and grid design elements to its increasingly creaky mobile OS. But the result isn’t as much like Windows Phone or Windows 8 as some had feared. Instead, Apple has built a more modern looking fascia on top of the grid of icons that iOS users already well understand. That was probably a good decision.

A lot of the language Apple is using to describe iOS 7 will be familiar to anyone who’s followed Microsoft’s Metro moves over the past three years or so. (An Apple executive actually uttered the phrase “fast and fluid” during Monday’s presentation, if you can believe that.) iOS 7 uses a grid design, just like Metro, features bigger fonts with an eye on typography, again just like Metro, and uses an “edge to edge design that takes advantage of every pixel.” Sound familiar? It should.

But all that said, Apple still came up with a design that I think looks unique. In what is clearly a nod to Steve Jobs, it has retained the silly, pixel-killing rounded rectangles all over the UI. And in what was clearly a nod to its 600 million+ user base, all of whom are used to the existing UI, iOS 7 still, somewhat inexplicably, presents its user experience as an old-fashioned grid of icons. Both of these are unfortunate decisions, but understandable.

I’m no designer, but iOS 7 looks beautiful to me. Some have criticized its old-fashioned glass-like translucency effects, especially in the new Control Center UI, and its overt reliance on the color white. But Apple’s decision to remove the faux materials focus of previous iOS releases—the fake leather stitching, the silly paper calendar-like graphics, and so on—is both smart and overdue.

The impact of this new system on Microsoft’s mobile platforms is hard to measure, for a few reasons. First, iOS 7 is still several months away from release, and it could change based on feedback. Second, and this one is curious to me, Apple only showed off iOS 7 on the iPhone. It’s not clear how or if this OS will be modified for the iPad.

That said, I’d like to examine the important iOS 7 features (not all of them) that Apple did announce with an eye towards comparing them to what’s available—or not—on Windows Phone, primarily. But also to Windows 8/RT when it makes sense.

Start screen. Here, Apple didn’t change a thing beyond silly graphical effects. It’s still a static grid of icons with separate apps and no integration. There are no live updates, no rich, detailed information from apps, none of the stuff that makes the core Windows Phone (and Windows 8/RT) user experience special. I get why Apple did this. But it is still something that needs to be fixed. Advantage Microsoft

Multitasking. And speaking of wholesale copying, the new iOS multitasking screen is exactly like that in Windows Phone. It does, however, offer a way to stop running apps, which Windows Phone can’t currently do.

Control Center. Sort of an expansion of the idea behind iOS’s Notification Center (which is still there), the Control Center provides “the controls you want to access quickly, all in one convenient place.” You swipe up from the bottom edge of the screen (cough, Metro) and see a control panel of useful controls. This reminds me of a similar UI in Android, and Windows Phone currently has nothing like this. That said, live tiles and “toast” notifications for volume and related controls somewhat mitigate the need.

iTunes radio. To say that Apple is late to the streaming audio game is an understatement. Microsoft has offered Xbox Music Pass (first called Zune Music Pass) for several years. Apple will get this one right, of course, which means that another Windows Phone advantage has been muted. That said, Pandora, Spotify and other services have been cross-platform for a long while as well.

Photos. While I feel that Windows Phone’s photo and camera capabilities are strong, Apple can make great claims to a superior camera in the iPhone and is adding real-time photo effects to the Camera app in iOS 7. The redesigned Photos apps looks nice, too, with a new timeline view called Moments and a nicer layout. This is an area where both platforms do well, especially when you consider unique Nokia benefits on the Windows Phone side and the ability to extend the Windows Phone camera with lenses apps.

AirDrop. Reacting to Windows Phone’s superior built-in sharing capabilities, iOS 7 is adding a feature called AirDrop that offers some unique capabilities. It can identify those contacts that are closest to you, ideal for those out in a group. It can then share those things over a peer-to-peer network that—wait for it—requires you and all your iGoon friends to have iPhones. I can’t stand this kind of proprietary lock-in stupidity, so let’s move on.

Safari. Apple’s mobile web browser displays tabs like IE 10 Mobile and it utilizes a flipping effect like that in Windows Vista from 2006. You use an iPhone, you use Safari. Whatever.

Siri. While Siri started off as sort of a silly, non-working affectation, I have little doubt that Apple will turn this into a true differentiator and the first steps to that future appear to be happening in iOS 7. Here, Siri picks up both male and female voices, and they sound more realistic. As important, the number of interactions you can have is increasing dramatically. There is absolutely nothing like this in Windows Phone. (And yes, I know all about the voice features.)

So far, I like what I see here. If Apple can integrate some Notification Center and Control Center functionality directly into the core “whack a mole” grid of icons silliness and build a phone that isn’t so awkwardly thinly-shaped that it threatens to fall out of your hand when you hold it, they may just be on to something here. As a fan of Windows Phone, I do like the design-centric nature of iOS 7, and it’s pretty clear that Johnny Ives knows what he’s doing. I can’t wait to actually use the system, both on phones and tablets, and see whether it matches what we’re seeing in the preview.