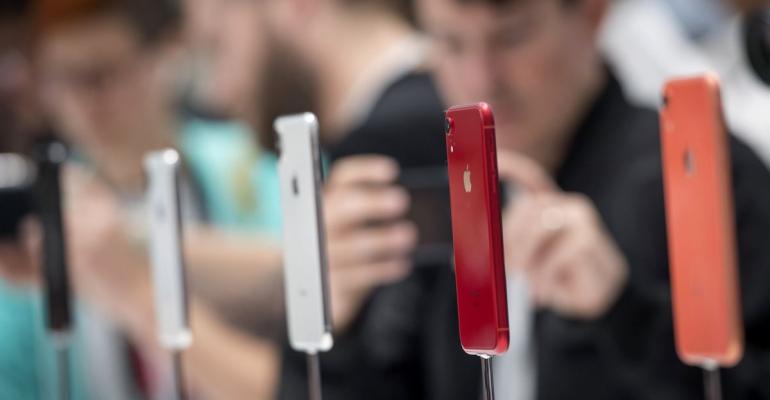 In the fiscal fourth quarter, iPhone unit sales barely grew from a year earlier, even though new flagship iPhones came out in the period. That was a disappointment, considering there were no big iPhone launches in the same period last year.

Apple shares fell about 7 percent in extended trading on Thursday. The stock closed at $222.22 in New York, leaving it up 31 percent this year. Apple suppliers declined after the report.

The Cupertino, California-based technology giant expects fiscal first-quarter 2019 revenue to be between $89 billion and $93 billion. Analysts were looking for $92.7 billion, according to data compiled by Bloomberg.

"I was shocked, but it makes sense," said Gene Munster, a veteran Apple analyst at Loup Ventures. "Apple wants investors to focus less on iPhone units, and more on the overall Apple business. It’s going to take a few quarters for Apple to win investor confidence in this new way of analyzing the Apple story."

In the fiscal fourth quarter, iPhone unit sales barely grew from a year earlier, even though new flagship iPhones came out in the period. That was a disappointment, considering there were no big iPhone launches in the same period last year.

The company released new iPhones in September, and upgraded iPads and Macs were introduced earlier this week. Apple raised prices on most of the devices, a relatively recent strategy to offset slowing unit sales growth. It’s a bet that consumers will continue to pay up for access to the company’s specialized and tightly integrated hardware and software.

The iPhone XR is one of the few outliers from the trend of more costly Apple gadgets. With a starting price of $749, it’s expected to be a popular holiday gift, luring owners of older iPhones to upgrade. The iPhone still looms large over Apple’s fortunes, accounting for more than 60 percent of revenues. It’s also the central hub for connecting the other devices and using services.

Before Thursday, Apple shares had withstood a recent tech stock rout. Amazon.com Inc. and Netflix Inc. tumbled about 20 percent each last month as the sector was pummeled by rising interest rates, and concern over the economic outlook and tariffs. Apple’s resilience was all the more impressive considering the company is exposed to China at a time of escalating trade tension with the U.S.

Sales in Greater China came in at $11.4 billion in the quarter, up 16 percent from a year earlier.

The Other Products category saw revenue jump 31 percent to $4.2 billion in revenue, likely on demand for Apple’s Watch.

Mac unit sales surged 42 percent from previous quarter. That’s a nice jump for a category that saw its lowest sales numbers since 2010 in the third quarter. Apple launched new MacBook Pros in July. IPad revenue fell 15 percent to $4.09 billion from a year earlier.