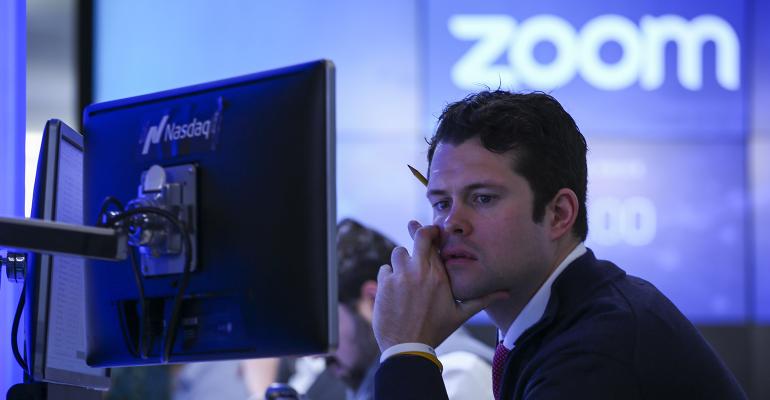 Zoom has emerged as one of the clearest corporate beneficiaries of the Covid-19 pandemic, which has forced millions of people to remain home to prevent the spread of the virus.

(Bloomberg) -- Zoom Video Communications Inc. reported the second-largest sales surge among Nasdaq 100 companies last quarter, providing an emphatic demonstration that businesses and consumers have continued to flock to the video-meeting service in even larger numbers than expected. Shares soared as much as 47% Tuesday.

Revenue jumped more than four times to $663.5 million in the fiscal second quarter from a year earlier, the San Jose, California-based company said Monday in a statement. Analysts, on average, projected $500 million. Biotech firm Moderna Inc. is the only Nasdaq 100 company to have reported a larger sales gain in a similar period, according to data compiled by Bloomberg. Earnings, excluding some items, were 92 cents a share in the period ended July 31, compared with analysts’ estimates of 45 cents.

Zoom has emerged as one of the clearest corporate beneficiaries of the Covid-19 pandemic, which has forced millions of people to remain home to prevent the spread of the virus. Workers, students and families count on the service to keep them connected to colleagues, teachers and loved ones. Chief Executive Officer Eric Yuan has tried to multiply the software maker’s good fortune by bringing complementary products to market, including an expanded phone service and dedicated monitors to slot into a home office.

“I’m at a loss for words,” said Rishi Jaluria, an analyst at D.A. Davidson who is bullish on the stock. “After Q1, my colleagues and I said this is one of the best quarters in software history. How do you follow this up? I think they’ve done it. Outside of the massive acceleration in growth, the biggest positive surprise is how much profitability is going to the bottom line.”

Zoom gave a forecast suggesting the explosive growth will continue. The company said sales will be as much as $2.39 billion in the fiscal year ending in January -- meaning revenue would almost quadruple in just one year. Analysts, on average, expected sales of $1.81 billion. Zoom previously projected fiscal-year revenue of $1.8 billion.

Shares rose to an intraday high of $478 in New York Tuesday after closing Monday at a record $325.10. The stock, which entered the public markets in April 2019, has increased more than fourfold this year.

“Organizations are shifting from addressing their immediate business continuity needs to supporting a future of working anywhere, learning anywhere, and connecting anywhere on Zoom’s video-first platform,” Yuan said in the statement.

Zoom now has 370,200 business customers with more than 10 employees, a more than fivefold surge from a year earlier. There are now 988 clients spending more than $100,000 on Zoom services, more than double the figure from a year ago.

The company has also made international growth a priority, bolstering operations in India to gain more users in the world’s second most-populous nation. The company hired 500 employees in the most recent period and told analysts in a conference call that it would expand spending on sales, marketing, capital expenditures and research and development in the coming quarters, to take advantage of the market opportunity. Yuan said Zoom is exploring an entry into the market for virtual events, but hasn’t decided whether it will partner or acquire to help businesses host remote conferences.

The results provide “confidence the company may extend its hyper growth beyond the peak of Covid-19 through at least the end of 2020,” said Boyoung Kim, an analyst at Bloomberg Intelligence. “The risk of churn as quarantine restrictions ease is manageable, given a rapidly expanding base of enterprise customers, many of which sign annual or multiyear contracts.”