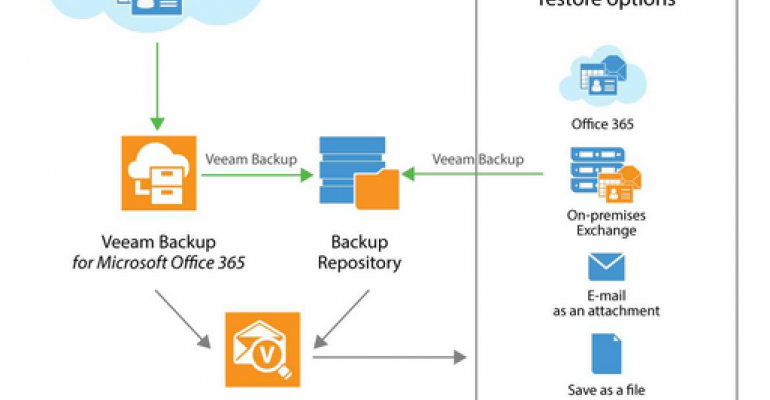 How to Protect Both Microsoft Office 365 and Exchange Mailboxes

All too often, IT professionals wrongly assume that since Microsoft Office 365 already resides in the cloud there is no need to have another copy of the data. Although Microsoft provides SLAs to keep Office 365 mailboxes up and running, it’s your data and it remains your responsibility to protect it.

One of the things I like about new technologies today is the way they can make big transitions truly seamless. Arguably the most common example is what is happening with Microsoft Exchange and Microsoft Office 365. A few years ago, Microsoft Office 365 became an attractive option for one of the most critical sets of applications used by, effectively, every organization. It is also a relatively seamless transition, as many of the same consumption mechanisms are maintained: Outlook, Web Access, Mobile, etc.

However, there is a characteristic unique to this software as a service (SaaS) use case: Organizations take some time to make the transition. I can recount many conversations around this as Veeam announced, then launched and then enhanced, our product in this space: Veeam Backup for Microsoft Office 365. The conversations span many years — along with the migrations. While every implementation and experience is different, many stories are similar. For example, when I first visit a customer they’ll often say they are “piloting” Microsoft Office 365 with a few users, such as the IT staff. When I visit the next year they’ll report they are “about 50% complete” with migrations. The third year I will likely hear from the same organization that they are “90% migrated.” One of the key benefits presented by this configuration is that the organization can have the same configuration and backup solution for effectively a hybrid SaaS deployment--hybrid in that this business application (mail and calendaring service) is both on-premises and in the SaaS space. Having a consistent approach with Veeam Backup for Microsoft Office 365 is a good practice in a backup policy to ensure that no mailboxes are omitted from backup among many products during an organization’s migration process. This unified approach also permits migration capabilities between Office 365 and on-premises Exchange.

Likely, the most telling benefit of the unified approach is the restore. Restores with Veeam have always been easy, and Veeam Backup for Microsoft Office 365 is no exception. The restores are driven with Veeam Explorer for Microsoft Exchange, which is the same engine used for on-premises Exchange backups and is shown below. This restore wizard starts the intuitive process to restore data back to either Office 365 or on-premises Exchange with ease. Exports are also supported — so building a PST file or a list of objects can also be done.

Just like having the right restore for any situation, having the right backup for any configuration is a strong feature of Veeam Backup for Microsoft Office 365. This is the type of approach that is needed today for the demands on critical systems and data. If you haven’t played with Veeam Backup for Microsoft Office 365, download a trial now — or our NFR program that permits up to 10 user mailboxes to be backed up for free. Are you operating a hybrid Exchange and Office 365 deployment? Does Veeam’s ability to protect both in a consistent manner appeal to you? Share your comments below.

Why you need to take control of your Office 365 email (webinar).

Rick Vanover (MVP, vExpert, Cisco Champion) is the director of Technical Product Marketing & Evangelism for Veeam Software based in Columbus, Ohio. Rick’s IT experience includes system administration and IT management; with virtualization recently being the central theme of his career. Follow Rick on Twitter @RickVanover or @Veeam.