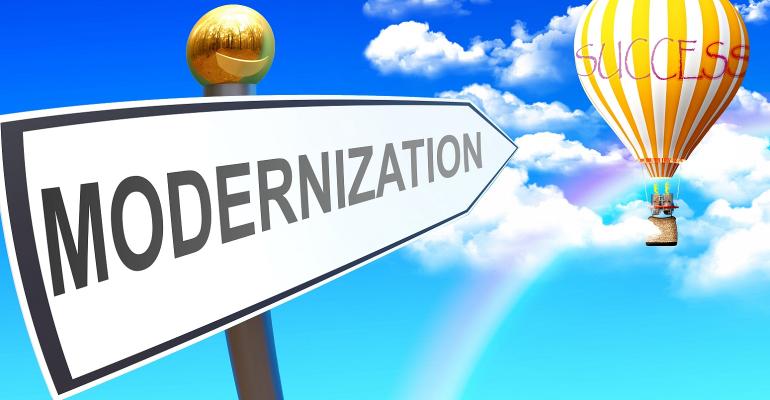 Application modernization may seem difficult, but you can achieve success if you follow these five steps.

That's the bad news. The good news is that there are solutions to these challenges. With the right approach, application modernization doesn't have to be prone to risk and setbacks.

What Is Application Modernization?

Before diving into best practices for app modernization, let's define what application modernization means. This is important because the term "app modernization" is frequently tossed around as an IT buzzword, but it's not always clearly defined.

Instead, what ultimately defines app modernization is the way software is delivered and managed, not the way it's architected or hosted. Simply embracing the latest, greatest technology doesn't translate to successful application modernization if you don't also modernize the paradigm surrounding application delivery and management.

To maximize the chances of successful application modernization at all stages of the process — from application design and testing, to deployment, to ongoing maintenance — you need to think holistically about what goes into application delivery and management, then find ways to modernize your approach.

One of the reasons application modernization projects may go awry is because they introduce stability problems or break critical functionality that end users depend on. When you change to a new hosting architecture, for example, or start introducing new features once a week instead of once a year, you run the risk of oversights that create user-impacting bugs.

That's why it's crucial to have a test harness in place. A test harness lets you automate testing of your application so that you can find flaws early and often within the software delivery process. In turn, you're able to deliver stable, vetted software to your end users.

Not only that, but test automation also helps address the staffing challenges that our survey identified as a major hindrance to application modernization. When you can automate tests, you can build and deploy quality software quickly, even if you don't have a large staff on hand to validate application release candidates prior to deployment.

Full automation of the application delivery lifecycle — which can be achieved using tools like CI/CD software and approaches like immutable infrastructure — not only allows organizations to do more with fewer staff members, but also mitigates concerns from management about how application modernization might introduce stability issues. It can help to keep costs down, too, which is another way to keep executives happy.

Too many application modernization projects fail to achieve their full potential because teams focus on the narrow goal of migrating to a new hosting model or architecture without ensuring that doing so supports the larger goal of increasing application portability.

That's a mistake because, at the end of the day, what matters most in the context of modern software is portability. Portable apps, which are designed based on principles like the Twelve-Factor App manifesto, can be hosted on-prem or in any cloud. They can run on Windows or Linux hosts. They can be migrated quickly to a new environment without requiring major overhauls.

By making portability a top priority, organizations future-proof their applications against business changes that they may not foresee at the time that app modernization takes place. In this regard, portability helps ensure long-term success — which is much more important than adopting the technology du jour in a way that doesn't actually free you from dependence on a certain hosting platform, or that makes it difficult to migrate to a new environment when the time comes.

Along similar lines, successful application modernization means changing the way applications are managed, not just the technology underlying the applications. Your goal should be to declare war on manual approvals and manual processes so that applications can be developed, deployed, and updated on a rapid basis, with minimal friction.

Of course, you must also ensure that proper guardrails are in place to prevent configuration changes or mistakes that could create stability and security issues. To that end, you'll want to establish automated controls that can, for example, block application networking changes that expose your software to the wilds of the internet, or permission changes that grant app access to users who shouldn't have it.

By automating protections like these, you ensure that application delivery remains smooth, without compromising on security and stability. That's yet another way to keep management happy with app modernization investment while also ensuring a positive end-user experience.

5. Recognize What App Modernization Is Not

Last but not least, arguably the single most important practice that businesses must embrace is to avoid misconceptions about what application modernization means.

As I've hinted, organizations too often assume that modernization necessarily means embracing flashy new technologies — like serverless functions, containers, or microservices. Often, these technologies are a part of modernization. But they're not the definition of modernization, and in some cases, modernization doesn't actually require changing to a new type of application architecture or hosting paradigm.

Instead, it's about changing the way the application is delivered and managed. It's about automating as much as possible, deploying updates multiple times a month instead of once or twice a year, and ensuring that applications are portable enough to support shifting business goals over the long term. When you can do these things with your app, you've modernized it, regardless of which technologies are behind it.

Achieving application modernization success may seem difficult. But it really boils down to a simple concept: having the right mindset. Your goal should be to identify what the business needs to get out of a modernized app, then implement processes that support those goals. Software architecture or hosting changes may be a means toward the end of software modernization, but they're not the end itself.