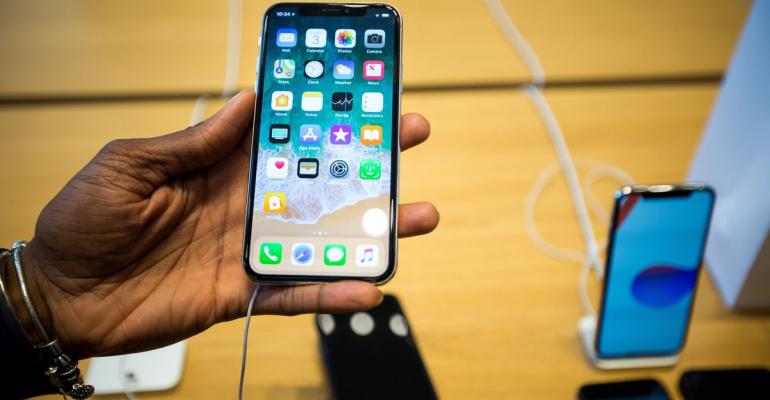 Many of Apple’s new facial-recognition features -- including one in which emojis mimic a person’s facial expressions -- require lasers that track tiny movements.

(Bloomberg) --Apple Inc. is spending $390 million to boost production from a maker of laser technology that’s critical for new iPhone X features such as facial recognition.

Apple, whose products can stretch the manufacturing capabilities of suppliers, will invest the money in Finisar Corp. from a $1 billion manufacturing fund announced earlier this year with the aim of creating more American jobs. Finisar will use the funds to reopen a plant in Sherman, Texas, that will employ 500 people. Finisar’s shares surged as much as 32 percent, the biggest intraday gain since 2009. Apple stock rose less than 1 percent.

The design process at Apple balances creating ground-breaking technology against the manufacturing challenge of finding suppliers who can provide the number of components needed to put new features inside hundreds of millions of handsets.

Many of Apple’s new facial-recognition features -- including one in which emojis mimic a person’s facial expressions -- require lasers that track tiny movements. The technology, which uses vertical-cavity surface-emitting lasers, is also part of the company’s emerging augmented reality efforts. Apple said it will purchase 10 times more of the technology this quarter than has ever previously been manufactured over a three-month period.

"This investment shows the company is doubling down on AR again, and locks down the VCSEL market, which will make it tough for other smartphone players to compete in AR," he wrote. The deal also suggests Apple will include these sensors in additional products. The iPhone X is currently the only Apple product with a facial recognition sensor. Apple is working on a new iPad with the feature for next year, Bloomberg News has reported.

The deal with Finisar demonstrates Apple’s ability to play king-maker among component suppliers. Finisar share gains on Wednesday helped pare its losses for the year, which stood at 36 percent through Tuesday’s close. A competing maker of 3-D sensors, Lumentum Holdings Inc., fell as much as 15 percent, its biggest intraday drop in more than two years.

"While this investment will likely come across as bad for Lumentum, we do not believe Lumentum’s relationship with the company has necessarily been affected," Munster said. "Given the limited supply of VCSEL arrays worldwide, as well as the limited manufacturing capacity of Finisar and Lumentum, we believe Apple will need multiple suppliers in order to meet their demand targets."

Founded in 1988 and with 14,000 employees, Finisar has primarily made components used in networking and the internet, including voice and video communications, storage and television. Its other customers include Cisco Systems Inc., Hewlett Packard Enterprise Co. and Huawei Technologies Co.

With much of the manufacturing and assembly for its products done in China, Apple has faced criticism from U.S. President Donald Trump and others for not creating more jobs in the U.S. Chief Executive Officer Tim Cook announced the manufacturing fund in May. Corning Inc., the maker of glass for iPhone and iPad screens, earlier received $200 million for glass processing.