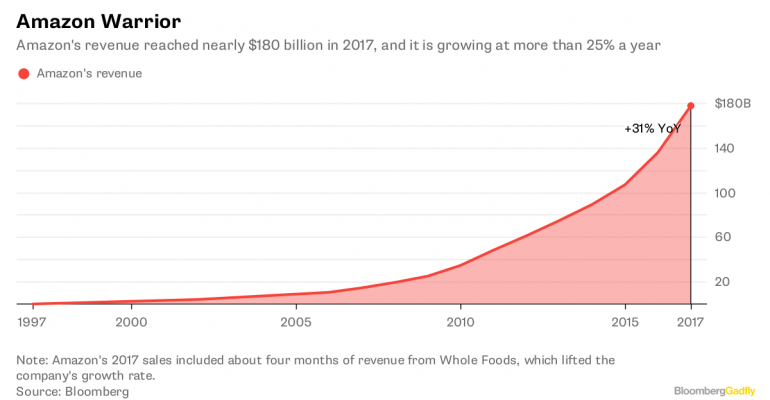 Executives hunting for allies to protect them from Amazon's Empire have landed on Google and Microsoft Corp.

Executives hunting for allies to protect them from Amazon's Empire have landed on Google and Microsoft Corp. Apparently the best way for a company to shield itself from Supreme Commander Jeff Bezos is to find a big brute who is slightly less of an immediate threat.

Walmart Inc. and Google last August made it easier for people to shop from Walmart using Google's voice-activated home speakers. Similar partnership announcements followed between Google and other Amazon rivals including EBay Inc. and Target Corp.

Google CEO Sundar Pichai told analysts in October that the company was devoting more attention to retailers because of their interest in cloud computing, online advertising, digital payments and other services Google (and Amazon) offer. Pichai didn't mention retailers' fear of Amazon, but he did use the term "flywheel effect," which -- ahem -- is a favorite phrase of Bezos.

Diane Greene, the leader of Google's cloud business, was more direct about the company's motivations this week. At a conference, she said Google was considered a helping hand by retailers, software makers and companies in other industries that aren't eager to use Amazon's cloud service. "Now everybody is looking at Amazon," Greene said. "We're their friend."

That's what you'd expect Google to say, of course. But there's anecdotal evidence that some companies really are avoiding Amazon Web Services, its cloud business. Supermarket chain Kroger Co. uses Microsoft and Google cloud products, but not Amazon's. "It doesn't make sense for us to do a ton to help grow that business for them," a Kroger executive told CNBC last fall. Stock analysts at Piper Jaffray have also heard financial-services and logistics companies expressing concern about using Amazon products, and going to Microsoft instead.

Run down the list of private sectors that spend the most on information technology -- health care, banking, retail, insurance -- and all of them worry Amazon is coming for them. To be sure, it's hard to quantify the Amazon fear effect on Amazon itself. Growth in the company's e-commerce sales and cloud revenue shows few signs of slowing. AWS actually reaccelerated in the fourth quarter.

Amazon paranoia is not new. Some companies have long avoided selling their products on Amazon or using the company's payments tools. My colleague Sarah McBride also wrote more than a year ago about retailers encouraging one another to ditch AWS over concern their money would strengthen Amazon's e-commerce operation.

What's changed is that Amazon has entered a more Death Star-ish phase. After the stunning acquisition of grocery chain Whole Foods last summer, it seemed any company or industry might be in Amazon's sights. Worries about the company's potential incursions may have motivated a $68 billion health care merger. This is not normal.

The widespread corporate fear of Amazon even got the attention of the Onion, which last year published a satirical opinion piece written by "Jeff Bezos" with the headline: "My advice to anyone starting a business is to remember that someday I will crush you." Good advice.