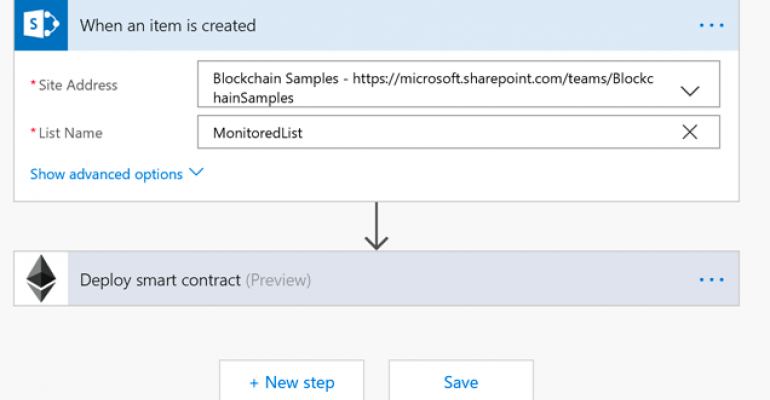 What You Need to Know about Microsoft's Azure Blockchain Development Kit

Azure Blockchain Development Kit provides the means for developers to explore the security and financial potential of blockchain.

In a blockchain-oriented move that could help cement users to its cloud platform, Microsoft has announced the initial release of its Azure Blockchain Development Kit. Here's what you need to know and how to get started.

Blockchain, according to Microsoft, "is a shared, secure ledger of transactions distributed among a network of computers." While most commonly associated with cybercurrencies like Bitcoin, blockchain has many other uses.

"Businesses are using blockchain as a common data layer to enable a new class of applications. Now, business processes and data can be shared across multiple organizations, which eliminates waste, reduces the risk of fraud, and creates new revenue streams," according to Microsoft. For example, "blockchain is being applied across the banking, capital markets, and insurance industries."

Stefan Schrijnen, Director, EY, a global professional services firm, commented in an insurance case study on the ways in which blockchain has the potential to cut costs: "We anticipate that the efficiencies delivered by Insurwave [the first marine insurance blockchain platform] will reduce the cost of marine insurance premiums by 10 to 20 percent."

According to an EY press release, Insurwave will support more than a half million automated ledger transactions and help mange risk for more than 1,000 commercial vessels in its first year.

JT Rose, Product Manager, Azure Blockchain, notes in a video from Microsoft, that the Azure blockchain development kit "is intended to help customers embark on the creation of their first blockchain application and 'smart contract.'"

Mike Ward, Head of Product Management, R3, an enterprise blockchain software firm, says, “The Azure Blockchain Development Kit will give our enterprise customers tools to integrate with the applications, software, and devices that people use every day, like Outlook, Alexa, SMS and web UX. Blockchain is moving out of the labs and into everyday business applications.”

"Most of the major vendors are doing blockchain-as-a-service," notes Tom Petrocelli, Research Fellow at analyst firm Amalgam Insights. "This means you don't have to worry about or implement blockchain infrastructure--you just write the application that uses blockchain and off you go.”

Blockchain's progression from concept to specialized tool--something very esoteric, used mostly by cryptocurrency--to more general as-a-service infrastructure has been rapid compared to many other computer technologies, according to Petrocelli.

"The reason for quick normalization is that the types of use cases that blockchain excels at happen to be for big for IT enterprises, like shipping and supply chains–ERP applications--and for financial services," says Petrocelli. "For example, HSBC and ING recently did the first distributed blockchain commodities transaction. This is the kind of process that is core to global financial services companies and complex to do ... and which blockchain provides the solution for."

Analysts note that Microsoft's new blockchain offering might not lure customers from other cloud platforms, but likely will help retain developers on the Microsoft platform.

"I don't think that having blockchain-as-a-service will bring people to Microsoft Azure," Petrocelli says. "But it will keep Microsoft developers from jumping to IBM, Red Hat [recently acquired by IBM], Oracle, or using open-source Hyperledger, for example. I think the Azure Blockchain Development Kit is a great addition to the Microsoft ecosystem, especially considering the kind of applications that blockchain is useful for. I don't think it will be a big moneymaker per se--but it will help keep people on Azure."

Version 1.0 of the Azure Blockchain Development Kit, including content and samples for a number of areas, is available now, via GitHub, at https://github.com/Azure-Samples/blockchain/tree/master/blockchain-development-kit.