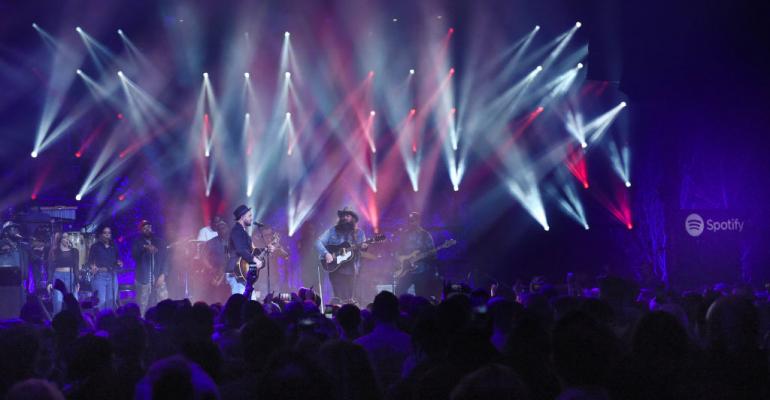 Spotify is on track to go all-in on Google Cloud Platform; and other cloud news.

For hyperscale cloud vendors, a significant enterprise customer win signals to the market that their cloud services are secure and reliable enough for the most mission-critical business workloads. As some vendors play catchup in the enterprise space, these customer wins can be a boon for marketing and sales efforts.

Even more valuable from a messaging perspective can be an existing customer extending its investment, which is what happened earlier this week when Google Cloud customer Spotify disclosed in its IPO filed this week plans to move its infrastructure completely to Google Cloud Platform.

In its IPO filed Wednesday, Spotify said it is currently in the process of migrating all its “data storage (including personal data of Users and music data licensed from rights holders) and computing” from its servers to GCP. Spotify started its partnership with Google back in February 2016, calling the project to move its infrastructure to GCP “a large and complex project that will take … some time to complete.”

At the time, Spotify VP engineering and infrastructure Nicholas Harteau wrote in a blog post: “The storage, compute and network services available from cloud providers are as high quality, high performance and low cost as what the traditional approach provides. This makes the move to the cloud a no-brainer for us. Google, in our experience, has an edge here, but it’s a competitive space and we expect the big players to be battling it out for the foreseeable future.”

Related: Here’s How Much Money Dropbox Saved by Moving Out of the Cloud

“What really tipped the scales towards Google for us, however, has been our experience with Google’s data platform and tools. Good infrastructure isn’t just about keeping things up and running, it’s about making all of our teams more efficient and more effective, and Google’s data stack does that for us in spades.”

Spotify is putting a lot of faith into Google, acknowledging in its filing that it can’t “easily switch [its] GCP operations to another cloud provider” and that while it competes with the consumer side of Google, it doesn’t think “Google will use GCP operation in such a manner as to gain competitive advantage against [its] Service.”

Spotify has a presence in 61 countries, per its IPO filing, with 159 million monthly active users and 71 million premium subscribers as of Dec. 31, 2017, which it claims is nearly double the scale of its closest competitor Apple Music.

This capex is wrapped up in building and expanding data centers, with Google, Microsoft, Amazon, Apple and Facebook accounting for 70 percent of Q4 hyperscale capex. Synergy says that the top five spenders spent over $13 billion per quarter in 2017 on average.

“Over the last four years we have seen many companies try and fail to compete with the leading cloud providers. The capex analysis emphasizes the biggest reason why those cloud providers are so difficult to challenge,” John Dinsdale, a chief analyst and research director at Synergy Research Group said in a statement. “Can you afford to pump at least a billion dollars a quarter into your data center capex budget? If you can’t, then your ability to meaningfully compete with the market leaders is severely limited. Of course factors other than capex are at play, but the basic financial table stakes are enormous.”

This week’s Mobile World Congress in Barcelona served as the backdrop for Alibaba Cloud to announce the forthcoming launch of products for European enterprises across big data, artificial intelligence, infrastructure and security, many of which are already available in its home market of China. They are:

How to Choose a Cloud Provider for Your Hybrid Cloud Solution
Aug 25, 2021