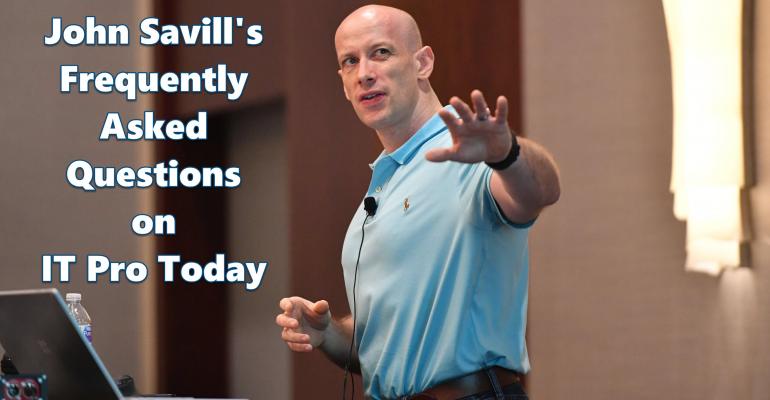 Three times a week, John Savill tackles your most pressing IT questions. Today he covers using chkdsk and various networking protocols in Azure, plus why PowerShell's OpenBaseKey does not work on a Windows 7 device.

Today he covers using chkdsk and various networking protocols in Azure, plus why PowerShell's OpenBaseKey does not work on a Windows 7 device.

Q. Should I use chkdsk in an Azure IaaS VM?

A. Chkdsk is used when there is a corruption on the file system. In theory, this tool could still be required in an Azure-based VM. If you have some kind of logical corruption, then you should run chkdsk within the guest OSe.

Q. Can I use protocol x in an Azure virtual network?

A. Azure supports TCP and UDP in Azure virtual networks. Other protocols will not work unless they can be encapsulated in TCP or UDP. For example, NAT-T (NAT Traversal) encapsulates the IPSec ESP in UDP.

Q. I'm trying to use OpenBaseKey on a Windows 7 machine but its not working, why?

A. OpenBaseKey enables a registry key to be opened. This was introduced with PowerShell v3, so it won't work with Windows 7, which uses PowerShell v2.

For Windows 7 users, the solution is to use OpenRemoteBaseKey instead. For example instead of:

You can then use this to interact with the registry. For example: