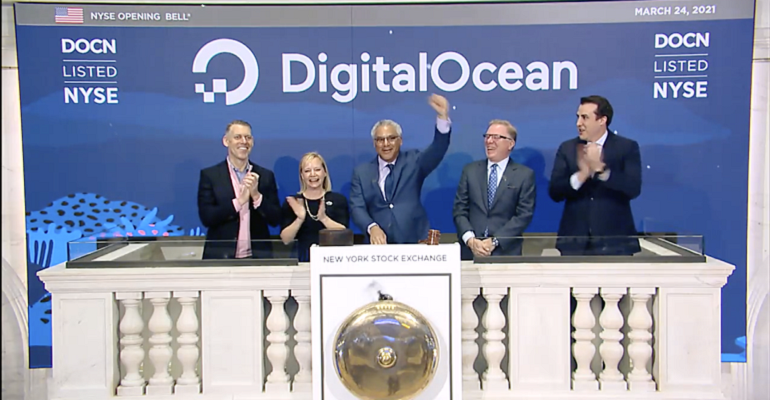 DigitalOcean, which has positioned itself as an alternative to the Big 3 public cloud providers, is also continuing to expand its "droplets."

Independent public cloud platform services vendor DigitalOcean had its initial public offering on March 24, with the company listing on the New York Stock Exchange (NYSE) under the symbol DOCN.

Based in New York, DigitalOcean was founded by brothers Ben and Moisey Uretsky in 2012. The public cloud provider raised $455 million in venture capital over the past decade and has positioned itself as a developer focused on the cloud that's an alternative to the big public cloud offerings from Amazon, Microsoft and Google.

In an S-1 filing ahead of the IPO, DigitalOcean reported that 2020 revenue was $318.4 million, representing 25% growth over 2019. The company stated in the filing that "the individual developer, start-up and SMB markets are underserved, and we expect our massive addressable market to continue to grow rapidly beyond 2024."

A Droplet in the DigitalOcean

While the core unit of compute at most cloud vendors is often referred to as a compute "instance," DigitalOcean is built around the idea of "droplets"—virtual units of compute and memory.

At the end of February, DigitalOcean announced an expansion of its offerings with two new types of droplets: premium Intel droplets that use second-generation Intel Scalable CPUs and premium AMD droplets powered by second-generation EPYC processors.

DigitalOcean has also been busy in 2021 building out its cloud security credentials. On March 11, the company announced that it had achieved SOC 2 Type II Service Organization Control certification. SOC 2 is an industry standard that helps define a set of best practices and controls for the security of operations. DigitalOcean has also achieved the Cloud Security Alliance’s Security, Trust & Assurance Registry (CSA STAR) Level 1 status, which audits a cloud provider's security controls.

Behind the DigitalOcean IPO

While there are many other cloud vendors that are publicly traded, most have non-cloud services as well. "With our listing on the New York Stock Exchange, DigitalOcean becomes the only pure-play publicly traded cloud company," Spruill told ITPro Today.

Even though DigitalOcean is now a publicly traded company, Spruill doesn't expect any particular change in focus. The public cloud provider's focus will remain on serving customers and delivering new innovations to help them test their ideas and grow their businesses, he said.

"We plan to continue to expand our global footprint to help even more developers and entrepreneurs, and we will continue to grow and invest in our community," Spruill said. "Today, more than 570,000 customers rely on DigitalOcean, and this is still just the beginning as there are more 100 million SMBs [small and medium-sized businesses] across the globe."