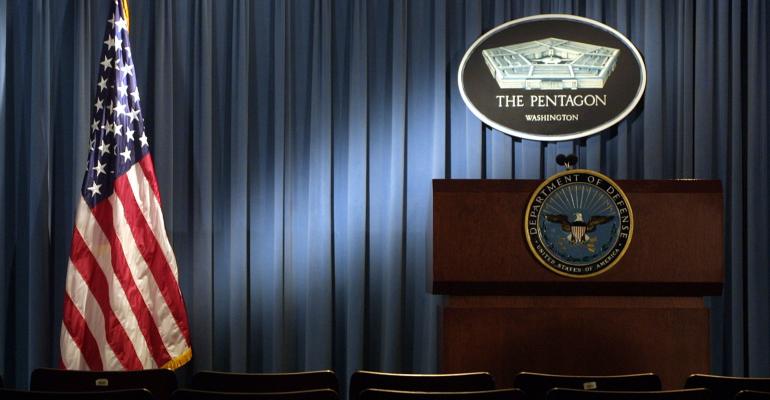 The U.S. Defense Department issued a final request for proposals for a cloud services contract valued at as much as $10 billion.

(Bloomberg) -- The U.S. Defense Department issued a final request for proposals for a cloud services contract valued at as much as $10 billion, opting for a winner-take-all competition that rivals say will favor Amazon.com Inc.

The project, known as the Joint Enterprise Defense Infrastructure cloud, or JEDI, involves transitioning massive amounts of Defense Department data to a commercially operated cloud system. The initiative attracted widespread interest from technology companies struggling to catch up to Amazon in the burgeoning federal government market for cloud services.

The move follows a months-long lobbying campaign in Washington by companies including Microsoft Corp., International Business Machines Inc., and Oracle Corp. that opposed the Pentagon’s plans for a single award rather than splitting the contract among multiple providers.

“We are looking for an industry partner who will learn with us and help us find the best ways to bring foundational commercial capabilities to our warfighters,” Dana Deasy, the Pentagon’s chief information officer, said in a statement.

Related: Amazon Has Plenty of Foes in Pentagon Cloud Deal

In a report to Congress, the Defense Department said making multiple awards under current acquisition law would be a slow process that “could prevent DoD from rapidly delivering new capabilities and improved effectiveness to the warfighter that enterprise-level cloud computing can enable.”

The department also said it expects “to maintain contracts with numerous cloud providers to access specialized capabilities not available under the JEDI Cloud contract.”

“The Pentagon doesn’t appear to have changed its strategy much, despite the outcry from industry,” said Chris Cornillie, a federal market analyst with Bloomberg Government. He said it “looks like a two-horse race,” with Microsoft as the main challenger to Amazon.

Amazon was seen as the front-runner for the JEDI contract from the start because it already won a $600 million cloud contract from the Central Intelligence Agency in 2013, showing the Seattle-based company can secure and manage sensitive government data. But Microsoft’s recently announced cloud deal with the intelligence community strengthens it’s case as an alternative.

Proposals must be submitted by Sept. 17, and at least one potential challenger to Amazon pledged to press on.

“IBM has proudly supported the U.S. military for decades, and we look forward to submitting a thoughtful, comprehensive proposal for a JEDI cloud that will serve the long-term needs of America’s men and women in uniform,” Sam Gordy, general manager for IBM U.S. Federal, said in a statement.

Companies dismayed by the Pentagon’s final solicitation could challenge the terms before the Government Accountability Office or in the Court of Federal Claims. A protest would probably focus on the requirements of the solicitation, alleging that they’re so restrictive or opaque as to foreclose competition and favor a particular vendor, government procurement experts have said.

The final request for proposals posted by the Defense Department calls for a two-year base period, followed by two three-year options and a final two-year option.

“The contract’s maximum ordering period, if all options are exercised, will be 10 years with a maximum dollar value of $10 billion,” according to documents posted by the Defense Department.

The terms of an award that competitors see as favoring Amazon comes as President Donald Trump has stepped up his criticism of the company, founder Jeff Bezos and the Washington Post, which Bezos owns.

So far, though, Trump has made no public comment on the Pentagon cloud contract.

In April, Oracle Corp. chief executive Safra Catz criticized the bidding process in a private dinner with Trump complaining that it seemed designed for Amazon to win, according to people familiar with the matter.

Trump heard her out and said he wants the contract competition to be fair, but made no indication he’d interfere in the bidding, the people said.