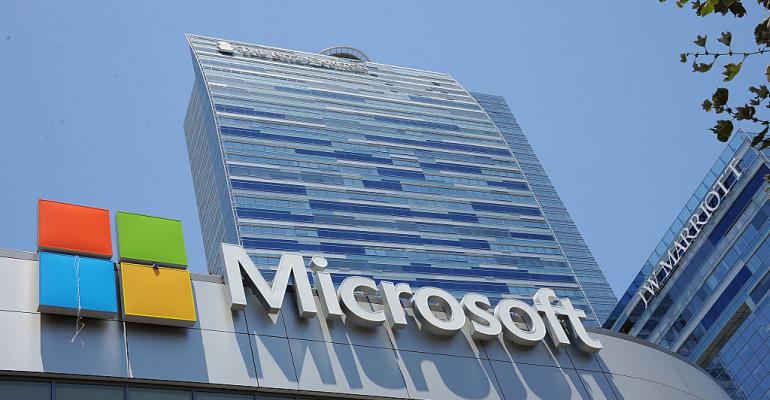 As Microsoft improves its own benefits, the company has also been trying to raise the standards for its subcontractors.

(Bloomberg) --Companies that want to staff Microsoft’s cafeterias, entrance desks and other positions will have to offer those workers three months of paid parental leave, the software giant said Thursday.

To qualify for contracts, companies will have to provide at least 12 weeks of paid time off, up to $1,000 a week, at the birth or adoption of a new child. The policy will apply to companies with 50 or more workers who perform “substantial” work for Microsoft. The requirement will be phased in over the next 12 months and is expected to impact thousands of workers.

“Companies like us are in a unique position to create positive impact within our broader ecosystem,” said Microsoft General Counsel Dev Stahlkopf. “We'd like to focus our resources on companies that share our values.”

Only 13 percent of private-sector workers in the U.S. get paid parental leave. As Microsoft improves its own benefits, the company has also been trying to raise the standards for its subcontractors. In 2014, some of those workers unionized and began pressuring Microsoft to make their employer provide paid leave and other benefits.

The following year, Microsoft announced it would require staffing firms to grant workers at least 15 days of paid time off. (Facebook has a similar policy.) The latest move makes Microsoft the first company to require their vendors to provide parental leave, according to Family Values @ Work, an advocacy group that promotes paid leave.

“Until recently most companies didn’t think much about the treatment of the employees by vendors or companies they subcontract with,” said Ellen Bravo, co-executive director of the group. “That’s a problem, particularly when a company subcontracts vital parts of their work.”

Bravo also encouraged Microsoft and other companies that see themselves as leaders on this issue to lobby for government policy changes that provide these benefits more widely. She also noted that only a quarter of employee leaves are taken for a new baby, which suggests companies should also consider benefits for family leave and other sick time. Microsoft’s Stahlkopf said the company may look at that in the future.