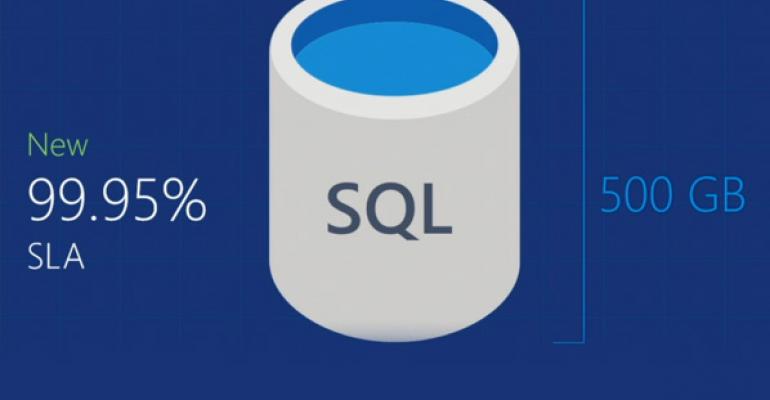 Over one million SQL Databases hosted on Azure

With over one million SQL Databases that are now hosted in Windows Azure, Microsoft is increasing its storage support for SQL Databases up to 500 gigabytes (GBs), where the company previously supported only 150 GBs. The announcement was made during today's Build 2014 developer conference by Scott Guthrie, executive vice president at Microsoft. Additionally, Microsoft is also delivering a new 99.95 SLA, which means that database professionals can create larger applications in the cloud with confidence.

Guthrie also announced a new self-service restore feature that helps DBAs get out of sticky situations when there isn't an available backup. Self-service restore lets you roll back to a certain time in the day, where Microsoft provides 31 days of backups. DBAs can now start taking advantage of this features, as it's baked into Azure.

Another new feature is active geo replication, which lets you run SQL Databases in multiple Azure regions around the world and set it to automatically replicate your databases for you. The new active geo replication features makes it possible to have your primary in rewrite mode and have secondary or multiple secondaries in read-only mode. Gurthie elaborated on the new feature's usefulness in the event of a natural disaster, where you would be able to initiate the fail over automatically to a secondary region, providing DBAs with a high-availability solution that lets you fail over at any point in time.