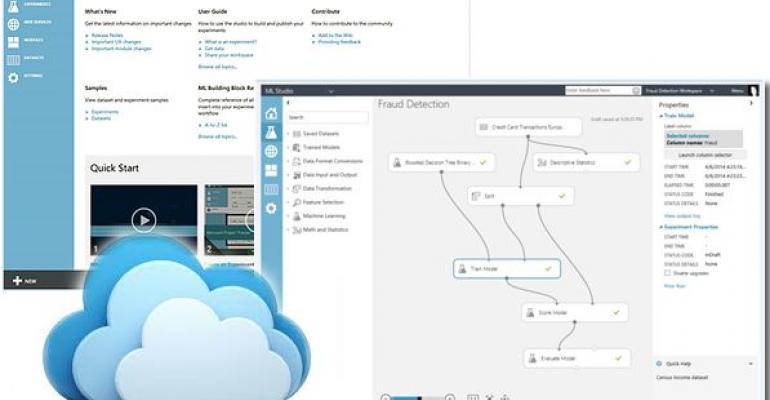 Exciting news came out of Redmond this week for advanced analytics with Microsoft Azure Cloud. A preview of Azure Machine Learning, or Azure ML (project code name “Passau”) will be made publicly available in July 2014. Public preview release timing was not announced yet, but it might align with the World Partner Conference (WPC) that will be held on July 13 -17. At the PASS BA Conference held back in April, Microsoft executives mentioned additional big business intelligence (BI) and analytics news would be coming this summer. According to press releases, Azure ML has been in use by approximately 100 customers in the Technology Adoption Program (TAP).

A Sneak Peek of the Azure ML Preview

Predictive Analytics is Not New for Microsoft

Machine learning, data mining, and predictive analytics is an area of statistics around capturing relationships between explanatory variables and predicted variables from past occurrences and using it for predictive purposes. Data mining is not new to Microsoft. It has been available within Microsoft SQL Server Analysis Services (SSAS) for many years now, though few people realize it's available or realize the power it can bring to your business.

Despite the new cloud Azure ML offering announced, it still looks like the older, on premise SSAS Data Mining functionality and Excel Data Mining Add-Ins are being actively promoted on the Microsoft website. There has not been any news of a deprecation that I'm aware of today. In a previous article, Taking SQL Server Analysis Services Data Mining Further, I mentioned caution when using the current on premise data mining offering due to a lack of significant investment. The current on premise solution is fantastic, still functions, and the DMX predictive queries are easy to embed into both applications and "smart reports."