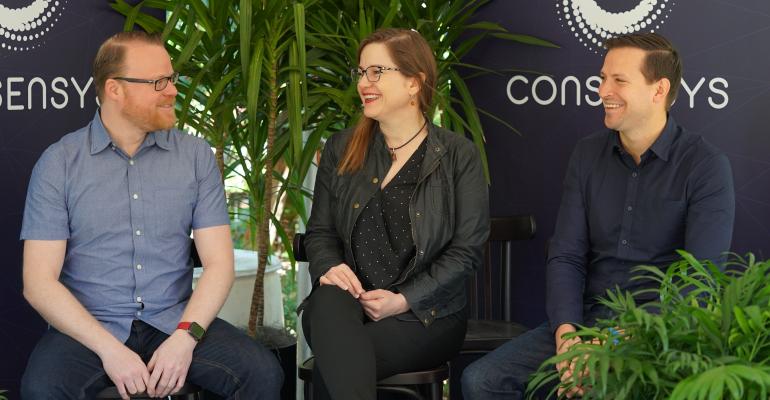 Sophia Lopez and Steve Cerveny, co-founders of Kaleido and Mike J Walker, Director of Applied Innovation at Microsoft at the Blockchain House Powered by ConsenSys at SXSW in Austin.
Cloud Computing>IaaS/PaaS

Kaleido's Blockchain Business Cloud, a blockchain as a service offering, is adding support for Microsoft Azure, along with its existing support for Amazon Web Services (AWS).

As enterprises push blockchain proofs of concept into production, there are still many projects that stall as each organization in a blockchain consortium brings their own individual cloud investments and regulatory needs, and sometimes those individual requirements aren't compatible. Kaleido, a ConsenSys company, is hoping to address this challenge through its blockchain as a service Blockchain Business Cloud adding support for Microsoft Azure, along with its existing support for Amazon Web Services (AWS). This allows companies to join a consortium without giving up their preferred cloud.

A blockchain consortia is when groups of organizations collaborate to define use cases and develop and run blockchain applications, Kaleido said. The company’s support of Azure and AWS means that organizations can set up a blockchain in either cloud environment, while adding regions from other cloud providers.

Kaledio’s Blockchain Business Cloud partnered with AWS in November, after its launch in May 2018. Since then, it has helped enterprises, including T-Mobile and Sony, deploy more than 1,000 consortia blockchain networks.

“Blockchain is not just a ledger, it’s a network,” Steve Cerveny, Kaleido founder and CEO, said. “So the technology needs to be as diverse as the organizations that ecosystem that are trying to set up this network. So I think it's even more important for something like blockchain to be borderless, or what we're calling borderless, and the idea that the network can grow and expand as the ecosystem needs.”

“Microsoft has really been a pioneer in the blockchain space,” Cerveny said, including partnering with ConsenSys and BlockApps, another ConsenSys company. “They been working at many levels across the industry, starting with the open source communities, but they've also made available to clients a number of tools and technologies.”

Kaleido offers a marketplace of plug-and-play services and integrations which help enterprises build their private blockchain, including Viant for supply chain management and Clause.io for real-time legal contracts. Now all of these solutions are available on Microsoft Azure.

“When we look at the marketplace and just the overwhelming demand [for blockchain] ... we're just inundated by customers that are not only curious, but want to build blockchain solutions, and sometimes they don’t even know why they want to build them,” Microsoft senior director, applied innovation and digital transformation, Mike Walker said. “Our job is to help people understand what they should be using these technologies for, and more importantly, what they shouldn’t be using them for.”

Kaleido helps enterprises build their own private blockchains without having to lose the strategic bets they have made on existing technology.

“The reality is Fortune 1000 companies make strategic bets on technology. And when you try to get this ecosystem booted up, and your primary focus is automating a specific business process using blockchain, you don’t want to be encumbered of your consortium membership by a technology stack,” Walker said.

Along with Microsoft and AWS, other cloud providers including Google and Oracle are betting on blockchain as a service as more enterprises embrace the technology.