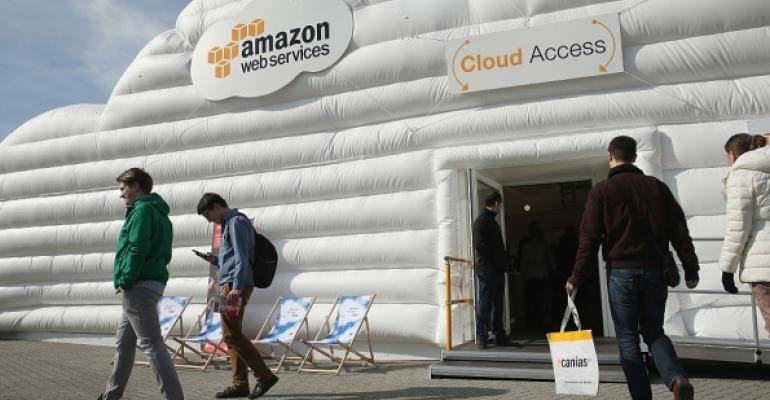 How VMware's Partnership With Amazon Could End Up Backfiring

There's nothing keeping Amazon from developing its own competing set of products down the road.

(Bloomberg) -- VMware Inc. stock has gained almost 50 percent since last October, riding a wave of optimism about a partnership with Amazon.com Inc. that was meant to save the software maker from oblivion as customers shifted more of their systems to the cloud.

The accord was announced with fanfare last year as a way for VMware to keep close ties to clients even as they move to internet-based computing – a business Amazon dominates, and one where VMware lagged. It was seen as a win for all parties. Customers that rely on VMware’s software for making servers more efficient could move some of their applications – for whatever the task, be it billing, payroll or email – over to Amazon’s cloud service without having to completely rewrite them. The resulting product, VMware Cloud on AWS, was released on Monday, with VMware Chief Executive Officer Pat Gelsinger and Amazon Web Services CEO Andy Jassy touting the release at VMware’s big annual conference in Las Vegas.

Here’s the problem: there's nothing keeping Amazon from developing its own competing set of products down the road. Should that happen, VMware would be poised to lose customers – including some that it helped introduce to Amazon Web Services through this partnership.

"We'll have to see how this relationship evolves over the next three to five years, but that is the thing that VMware will have to navigate very carefully,’’ said Abhey Lamba, an analyst at Mizuho Securities USA Inc. “At least in the beginning it seems like a symbiotic deal.” Though Amazon wants a bigger share of the computing and infrastructure markets, it would take the company time to develop mature products in VMware’s space, he said.

Gelsinger, for one, is “absolutely not” worried he’s given Amazon the keys to lure away his customers.“

Customers -- if they just wanted to move to the Amazon service, they would have,” Gelsinger said in an interview. “It's not like the Amazon service just appeared yesterday. It's been around for a decade-plus now.” It’s just too hard to move these already-built-with-VMware applications to Amazon’s cloud without this new blend of the two company’s programs, he said. “We now give them the `easy’ button.”

After several failed attempts by VMware to come up with a cloud strategy, the Amazon deal looked like a godsend. It tied up VMware with the dominant service that lets customers store data and run applications in remote data centers rather than the customers’ own. It gives VMware a way to appeal to customers that want to try out next-generation cloud technology while keeping them paying VMware license fees. At the least, it buys VMware some time by preventing customers from fully defecting to cloud-based options, because they can keep their VMware systems in place while running them on AWS.

Seattle-based Amazon gets access to customers that aren’t ready to move everything to the public cloud – the only option Amazon offers, meaning all services run through Amazon’s data centers – and want to keep some of their data and applications running in their own corporate facilities, an approach called hybrid cloud. Many businesses have told AWS they want to be able to use VMware's tools on the cloud service, an AWS spokesperson said in an email.

“In the near and medium term this is a win for both companies, but they need to be keeping a careful eye on each other and what other moves they are going to make,” said Matt McIlwain, a managing director at Madrona Venture Group in Seattle. Because VMware is trying to gain entry to Amazon’s home turf and because Amazon is a fierce competitor, “Pat is taking more risk here,” McIlwain said.

Amazon has many cloud partners and hundreds of smaller software companies that sell services and programs that work with AWS, which generated $12.2 billion in sales for the online retailer last year. Those companies profit greatly from the affiliation, and in many cases, Amazon-related products represent most or all of those companies’ revenue.

But these partners serve at the pleasure of AWS. Any day, Amazon could introduce its own products in those companies’ businesses. Last year, Amazon opted to start selling its own services in which it helps customers move to the cloud and manage those systems, competing with longtime partners like Accenture and Seattle’s 2nd Watch.

In the year since Amazon entered its market, partner-competitor 2nd Watch has been able to carve out a good business among clients who need more customized offerings than the ones Amazon sells, said Jeff Aden, an executive vice president and co-founder at the company. But he noted that facing the prospect of Amazon stepping on your toes is an uncomfortable one for some companies, particularly older, established tech firms. Amazon has also deployed this playbook on the retail side of the business, where a 2000 partnership with Toys “R” Us Inc. ended in the courts after Amazon struck competing deals with other providers and moved more into selling toys on its own.

In some ways, Amazon operates like crosstown cloud rival Microsoft Corp. did in the mid-1990s and early 2000s. That company also amassed lots of partners to sell software on top of the Windows operating system, and treated them well up until it opted to compete with them – a move that happened in spaces like antivirus and business-analytics software.

Executives at VMware and parent company Dell Technologies understand this challenge. When Gelsinger appeared on stage with Jassy last year at AWS’s big annual conference, one executive joked privately that it was nice of Jassy to invite Pat to his own funeral. VMware is aware that partnering with Amazon carries risk,  but it also has significant potential for reward, said two people familiar with the company’s thinking. Plus, Gelsinger expects he can hold onto VMware customers even as they get a taste of Amazon, because customers have already used VMware’s products to automate management of their technology systems, and it’s time-consuming to switch that to Amazon’s management programs, said one of the people. VMware is also controlling the access to its customers and is selling the entire package, including the related AWS services.

"In this case, VMware is controlling all the paperwork and the relationship. The customer doesn't interface at all with Amazon. It's all managed through VMware,” said Jayson Noland, an analyst at Robert W. Baird & Co. Still, he said, “anybody that doesn't view Amazon as a threat is kind of missing the point.’’

A lot of the risk for VMware comes when its clients write new applications. Customers generally don’t like to rip out and replace existing programs that work, so the idea of moving something they put together using VMware products into AWS without rejiggering them is appealing. But if they like AWS so much, they may just go straight there – and stop relying on VMware – when they are adding brand-new applications.

Four years ago, VMware seemed unconcerned about the threat from the cloud in general and Amazon in particular. Then-Chief Operating Officer Carl Eschenbach told a partner meeting that it was hard to believe VMware and its partner network couldn’t beat a book seller, referring to Amazon’s roots decades ago as an online book retailer, according to a person familiar with the meeting. VMware’s virtualization software, which lets companies consolidate multiple computing workloads on to fewer servers, is a cornerstone of corporate data centers and a key tool of corporate IT. But as customers move applications and tasks into the cloud and away from their own data centers, they aren’t using VMware products.

By last year, VMware had little choice but to strike a deal with Amazon, which has three times the cloud market share of No. 2 Microsoft, according to the most recent data from Synergy Research Group. VMware tried to build its own cloud products but won few customers. Then it had a “come to Jesus” moment when executives realized it was too late to go it alone in the cloud market, according to Edward Parker, an analyst at BTIG. Rather than try to compete with a player that was already miles ahead, Gelsinger struck a deal with the AWS chief, focusing instead on making VMware products work with the most popular cloud.The deal has been part of a spate of good news for the software maker this year. VMware has shown it can build momentum despite increasing demand for the cloud. Even before the new Amazon-optimized products shipped, sales growth has accelerated, and adjusted profits also are rising, helped by increasing revenue from networking and virtual storage products. The stock is nearing an all-time high.

Even if Amazon remains a good partner, there's another looming problem for VMware. A big reason behind the partnership is that some VMware customers aren't ready to move wholesale to Amazon’s cloud and need an easy, familiar on-ramp. Over time, customers may want to fully embrace AWS.

“Does VMware have a role to play in tomorrow's world of application support and development?” said BTIG’s Parker. “I don't know.”