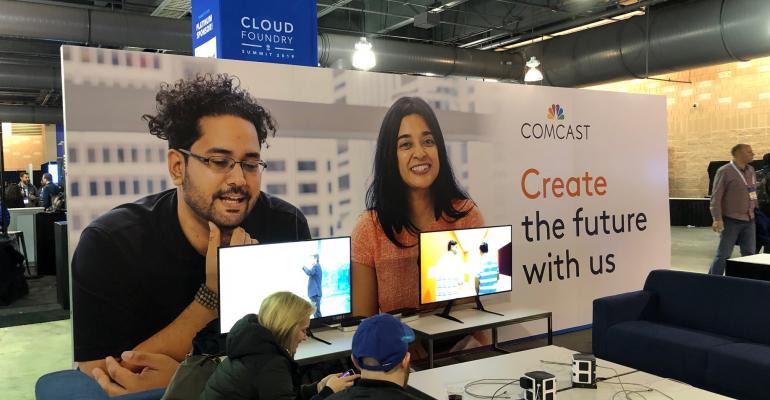 IT leadership from Comcast spoke at Cloud Foundry North America Summit this week about its shift to embrace open source technologies.

PHILADELPHIA -- Most consumers may not really care what is going on in the backend of a service, so long as they get the service they were promised and paid for. If you are watching TV, for example, you want to be able to flip between channels seamlessly, with no video buffering or downtime. To deliver a seamless experience, developers rely on myriad technology, increasingly open source. If you are a user of Comcast Xfinity, you may be interested to know that open source technology running in the backend has enabled it to focus on other innovations, including its X1 Voice Remote.

IT leadership from Comcast spoke at Cloud Foundry North America Summit this week about its digital transformation, including an embrace of open source technologies like the Cloud Foundry platform, as well as its own projects.

When Comcast first started contributing to open source projects in 2013, it made 13 contributions, Nithya Ruff, senior director of Comcast's open source office, said in a panel discussion on Tuesday. Last year that number ballooned to 165 major contributions, thanks in part to the dedicated organization she heads up within Comcast that acts as the first line of support for developers that want to contribute to open source.

In response to the concern that legal may be a blockade to open source adoption at an enterprise, Ruff said that was not her experience at Comcast.

“In our case legal was the instigator of the open source office,” Ruff said. “They were getting inundated with questions from developers who wanted to contribute to open source.”

The open source office acts as a center of excellence and knowledgebase for developers within Comcast, providing support and information around open source licensing along with other issues. It has been an important initiative in empowering developers in the organization to consider the opportunities available with open source technology.

“I don’t think we have the answers or all of the solutions, but we are doing a lot,” Chris Power, senior principal engineer at Comcast, said during a presentation on open source and cloud on Wednesday. “The watershed moment for the organization came in the last two or three years” with the formation of its open source office.

Recently Comcast has been focused on developing three open source projects that it uses internally, including Trickster, a cache that can sit in front of Prometheus; VinylDNS, an internal DNS solution; and Kuberhealthy, a testing tool for Kubernetes clusters.

Consuming and contributing to open source has created a much more dynamic environment at the company, Rick Rioboli, SVP and CIO at Comcast said. “It got us out of the vendor-dependent mentality we had years ago.”

With open source, people within the company no longer must wait for a small internal team to roll out updates, Ruff said, pointing to the team it had in place to maintain VinylDNS before it was open source. And externally, there has been a huge shift in the public perception of Comcast because of its open source contributions, she said.

“People actually see us as a technology player and an open source player,” she said, a perception that has helped it attract technologists. (Comcast is among several companies at Cloud Foundry North America Summit that is recruiting.)

“We have over 10,000 developers within Comcast,” Rioboli said, so getting everybody aligned on a common platform and common way of doing things continues to be a challenge.

“If you can get your leadership on your side, and legal team on your side, it’s just setting up some of these processes at scale,” Ruff said. “Developers are already on your side.”