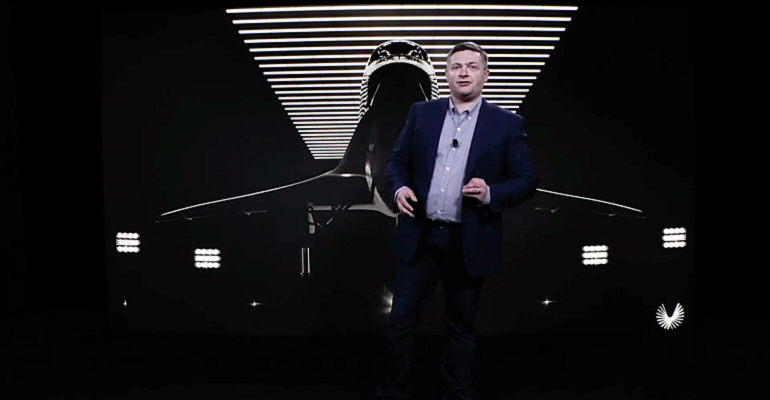 A new era of commercial supersonic air travel could be coming by the end of the decade, thanks in part to Boom Supersonic's use of AWS' cloud computing power.

Cloud computing typically has nothing to do with real clouds in the atmosphere, but that's not the case with Boom Supersonic.

In building a new generation of supersonic commercial jet aircraft, Denver-based Boom Supersonic is making extensive use of the cloud for design and test. In a session at the Amazon Web Services (AWS) re:Invent conference earlier this month, Blake Scholl (pictured), founder and CEO of Boom, outlined how his company is using the cloud to design and build an aircraft that provides supersonic air travel that would be cost-prohibitive using other means.

Scholl is no stranger to Amazon, having worked for the company as a software engineer from 2001 until 2006. In 2014, he founded Boom Supersonic with the vision that it was possible and cost-effective to build a supersonic aircraft that could reduce the time to traverse the globe. Commercial supersonic air travel hasn't been available since 2003, when the Concorde jet was retired by British Airways and Air France.

Scholl answered his own question by explaining how the cloud is the key to cost-efficiently building a sustainable supersonic jet that could one day revolutionize air travel.

Reducing Travel Time with the Cloud

Boom's mission is to make the work more accessible.

Scholl noted that for the past 60 years it has taken nine hours for a commercial flight to fly from Seattle to Tokyo. By the end of the decade, his goal is that millions of everyday travelers will be enjoying the benefits of supersonic flight aboard a Boom Overture jet that is twice as fast as any aircraft flying today. That means that Tokyo will be just four and a half hours from Seattle and London will be just three and a half hours from New York.

For most of aviation history, aircraft were designed on paper with scale models that were built and tested in wind tunnels, Scholl said. That process is slow and costly and to date hasn't benefited as much as it should from cloud computing advancements.

"Today to design a faster airplane, we need the fastest computers and computational methods," he said. "Leveraging AWS saved us literally years and millions of dollars because we can now test many designs quickly and inexpensively, and as such we can deliver a better airplane."

Boom's first jet is the experimental XB-1 that was rolled out in October. When designing the XB-1, Boom made use of AWS high-performance computing (HPC) cloud clusters that typically had 500 or more compute cores. Hundreds of possible airplane designs flew through virtual wind tunnel tests, encompassing thousands of scenarios, according to Scholl.

"Because AWS allowed us to run many hundreds of these simulations concurrently, we achieved a sixfold increase in team productivity," he said. "Simply put, without AWS today, we would be looking at a sketch of a future airplane concept, not an assembled jet, because years of design work would still remain."

The Boom Overture Supersonic Jet and the Cloud

The XB-1 is a critical stepping stone for Boom's ultimate goal: the Overture jet, which is intended to be a commercially viable supersonic aircraft. Scholl said 525 terabytes of XB-1 design and test data are already on AWS, and he expects that Boom will generate petabytes of data as it progresses through the development of the Overture jet.

"Because AWS lets us put compute next to data, we can run models across our dataset, gaining actionable insights," he said. "For example, we're using machine learning to calibrate simulations for wind tunnel results, accelerating model convergence and allowing us to deliver a more optimized aircraft."

"Think of how many industries AWS has already transformed, and today supersonic flight is one of those surprising benefits of computing," he said. "Just as AWS is reinventing computing, at Boom, we're reinventing travel."