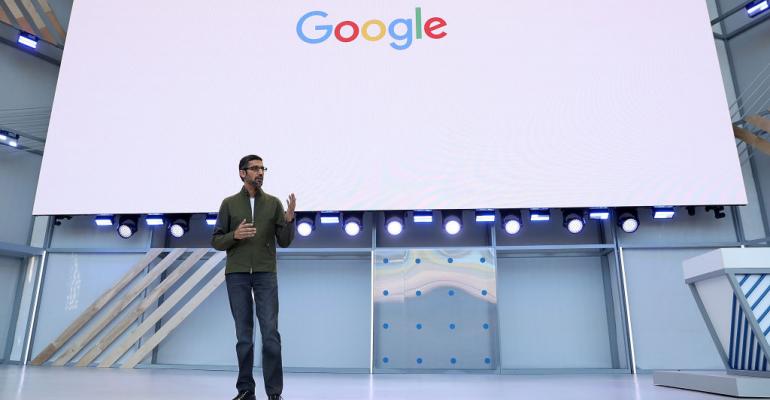 The decision capped a furious debate inside Google over whether the Alphabet Inc. unit should use its AI to help the military. Now, the company faces a new conundrum: How to define what government contracts are "similar" to Maven.

(Bloomberg) -- On Friday afternoon, an email went out to more than 4,000 Google employees who had signed a petition to cancel a company contract with the Pentagon. It was celebratory.

"Today was big," began the email, which was viewed by Bloomberg News. That morning, Google cloud chief Diane Greene said the company wouldn’t renew a contract with Project Maven, a Defense Department program that uses artificial intelligence to analyze drone footage. She also said Google "will not pursue similar DoD contracts," according to the email, which was authored by one of the protesting employees.

The decision capped a furious debate inside Google over whether the Alphabet Inc. unit should use its AI to help the military. Now, the company faces a new conundrum: How to define what government contracts are "similar" to Maven.

A set of AI principles, due this week from Google Chief Executive Officer Sundar Pichai, may help draw the line. But the Maven brouhaha has damaged the company’s already-slim chances of winning other Pentagon work. A senior defense official described the internal ambivalence within Google as “baggage” that made the company less attractive as a partner, industry publication Defense One reported back in April.

Greene’s division is in the running for two larger contracts to modernize the Defense Department with cloud services. There’s JEDI, or Joint Enterprise Defense Infrastructure, cloud storage contract totaling as much as $10 billion. And DEOS, or Defense Enterprise Office Solutions, a 10-year deal for email and web document tools worth $8 billion.

Even before the employee protests, Google was a long shot for the deals, because it has less experience than rivals like Microsoft Corp., IBM and Oracle Corp. with legacy enterprise systems that large government agencies prefer. "It would be harder to imagine someone like the DoD, who has so much sensitive workload and data, to completely go the Google way," said James Bach, a federal-contracts and technology-services analyst at Bloomberg Intelligence. Amazon.com Inc.’s cloud business is a major contender, too.

Heather Babb, a Defense Department spokeswoman, referred questions about JEDI to Google. A Google spokeswoman declined to comment or confirm whether the company is bidding for either Defense cloud contract. At the Friday meeting, Greene did not discuss JEDI or other cloud deals, according to people with knowledge of the meeting.

Federal spending on information technology will hit $100 billion by 2023, according to Bloomberg Intelligence, and the Pentagon has already increased its cloud work.

Google’s decision to retreat from Maven came after unusually sustained protests from staff. Back in September, Google was awarded a portion of the project. It was a small deal, where Google was a subcontractor, yet cloud executives saw it as leverage for winning more lucrative defense contracts, according to people familiar with the matter.

As news of the deal spread at Google, however, thousands of employees raised objections. Some staff, including AI chief Jeff Dean, said they supported giving some services to the defense industry, like Gmail, but voiced reservations about using AI for autonomous weapons. Other Googlers had broader objections. Over 4,000 employees signed onto a petition to Pichai demanding Google remove itself from "the business of war."

The DEOS contract is more in the realm of Dean’s Gmail example, while JEDI may be a stretch. In the Pentagon’s Statement of Objectives for JEDI, released in April, the move to the cloud is cast as a way to give "warfighters" the ability to make decisions at "mission-speed."

Google’s Project Maven contract, due to expire in March 2019, was worth $9 million, according to Gizmodo. But internal emails reported by The New York Times revealed that Google cloud executives expected the deal to top $250 million.

In a March interview with Bloomberg News, Greene noted that the Maven deal was for "non-offensive" purposes. Yet several people at Google, including some AI engineers dismissed this argument. They asked not to be identified discussing private matters.

Much of the debate over Project Maven revolved around the ethics of using AI for military purposes. If Greene and other executives argue internally for pursuing JEDI and DEOS, they may steer away from mention of AI and focus on more-traditional cloud offerings like renting data storage and Internet-based email. Still, Greene’s staff frequently pitch how its advanced machine learning software is baked into its cloud services, including Gmail.

"A lot of those cloud services are tied to the AI that they’re using," said Peter Asaro, an associate professor at The New School who organized a letter from academics supporting the Google employee petition against using AI for Maven. "It gets tricky."

On Friday, multiple Google staff also said they were opposed to further contracts with the Pentagon because they see it supporting similar military work. The employees who opposed Project Maven are eagerly awaiting Google’s AI principles later this week.

"We demonstrated that employees have a voice," the Friday email read. "[W]e need to remember this when we examine the AI principles and their governance mechanisms: we worked to make this happen, and we must ensure that we are not cut out of the process."