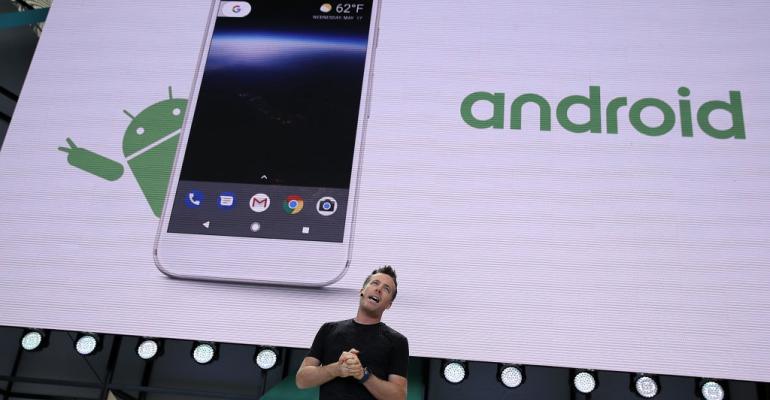 Google Said to Face Antitrust Fines on Android Within Weeks

The Android investigation targets Google’s strategy on mobile devices that sees Google Search pre-installed or set as the default on most Android phones and tablets sold in Europe.

(Bloomberg) -- Google faces fines for hindering competition with its Android mobile phone system as European Union antitrust watchdogs get ready to add to last year’s record 2.4 billion-euro ($2.8 billion) penalty against the U.S. tech giant, according to people familiar with the case.

The EU is in the final stages of the Android probe and could issue a fine as soon as July, according to the people, who spoke on condition of anonymity because the process isn’t public. The Alphabet Inc. unit also risks potential penalties in two other cases, they said.

The Android investigation targets Google’s strategy on mobile devices that sees Google Search pre-installed or set as the default on most Android phones and tablets sold in Europe. The practices may shut out rival search engines and harm consumers by stifling innovation, the EU said in 2016.

Last June’s huge fine came with a warning that it could face more sanctions for failing to treat shopping websites fairly. A third probe focuses on Adsense advertising contracts. Getting the EU’s three Google investigations to the finish line is Margrethe Vestager’s main task as competition commissioner before she’s due to move in late 2019.

The EU probe into the way Google links its apps to the Android mobile-phone software questions how internet firms give away services in return for data that aids advertising sales. An EU order could demand Google stop packaging its apps -- including search, the Gmail email service and maps -- with Android, which risks undermining how Google operates in other areas.

A finding that Google’s Android practices are illegal "should mean not only that Google should cease its anticompetitive practices regarding smartphones, but also in other areas – smartTVs, for example -- where it is foreclosing competition by using the same practices," said Thomas Vinje, a lawyer at Clifford Chance LLP who represents Google rivals in the investigations. "The impact might be more significant in these new areas."

Investigators have been pushing hard on the Android and Google shopping cases in recent months. They’ve sought extra evidence to bolster their arguments on Android, advancing so much from the 2016 complaint they sent Google that the company sought an oral hearing to defend itself, three people said. The EU refused the request as a hearing is usually only allowed immediately after a complaint is sent.

Regulators are also checking intensively on Google’s compliance in the shopping case and may take the opportunity of the first anniversary of their fine to formally warn Google of daily fines if they find it didn’t follow EU orders to comply. Vestager also waited a year before suing Ireland in 2017 for failing to reclaim back taxes from Apple Corp.

Google was required to offer equal treatment to comparison shopping services in the product listing ads that appear on top of search results. While Google set up an auctions system to allow smaller rivals to appear, few actually do and several of them have called on the EU to fine Google. Regulators appear to keen on moving fast in this case and refused long extensions to information requests earlier this year, two people said.

For the shopping case, such delays matter as regulators calculate fines for each day Google failed to comply with the order. Foundem, the first company to complain to the EU about how Google treats shopping search sites, estimates that the total of fines would now exceed last year’s penalty, passing the 3 billion euro mark by the end of June.

Fines for Android may also be substantial if the EU were to base its calculations on Google’s mobile advertising revenue, a figure it doesn’t break out from its total ad sales. But Google may receive some comfort that it may escape an extra penalty that lifts fines by 50 percent for failing to learn past lessons.

Google is not likely to be treated as a “recidivist” in any fines from the Android or AdSense cases. Wouter Wils, the EU official who handles complaints from companies about investigations in progress, wrote in a 2011 academic paper that such a fine increase would "not appear justified" for behavior that took place at the same time as actions punished by the first fine.

Neither Google or the European Commission responded to a request for comment.

The Financial Times reported Wednesday that Google may be fined in July in the Android case.