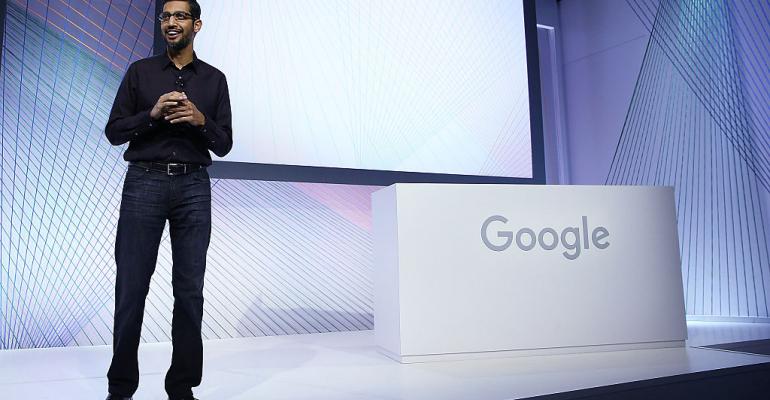 Google Renounces AI for Weapons, But Will Still Sell to Military

Sundar Pichai, chief executive officer for Alphabet Inc.’s Google, released a set of principles on Thursday after a revolt by thousands of employees of the internet giant.

(Bloomberg) -- Google pledged not to use its powerful artificial intelligence for weapons, illegal surveillance and technologies that cause "overall harm." But the company said it will keep working with the military in other areas, giving its cloud business the chance to pursue future lucrative government deals.

Sundar Pichai, chief executive officer for Alphabet Inc.’s Google, released a set of principles on Thursday after a revolt by thousands of employees of the internet giant. The charter sets "concrete standards" for how Google will design its AI research, implement its software tools and steer clear of certain work, Pichai said in a blog post.

"How AI is developed and used will have a significant impact on society for many years to come," Pichai wrote. "As a leader in AI, we feel a special responsibility to get this right."

The seven principles were drawn up to quell concern over Google’s work on Project Maven, a Defense Department initiative to apply AI tools to drone footage. Staff protests forced Google to retreat from the contract last week. The company said on Thursday that if the principles had existed earlier, Google would not have bid for Project Maven.

Yet Google’s cloud-computing unit, where the company is investing heavily, wants to work with the government and the Department of Defense because they are spending billions of dollars on cloud services. The charter shows Google’s pursuit of these contracts will continue.

"While we are not developing AI for use in weapons, we will continue our work with governments and the military in many other areas," Pichai wrote. "These collaborations are important and we’ll actively look for more ways to augment the critical work of these organizations and keep service members and civilians safe."

Google’s charter is a watershed moment for the company and AI as a field. Technology giants, like Google, have stretched far ahead in developing software and services that give machines more control over decisions. However, these capabilities are now spreading to more industries, such as automotive, health care and government sectors. A driving force behind the spread is the easier access to AI building blocks that Google, Amazon.com Inc. and Microsoft Corp. have provided through their cloud services.

AI advances are helping medical research and provide other benefits. But the use of the technology in other areas has sparked concern among lawmakers and advocacy groups. Civil liberties organizations recently called out Amazon for offering facial recognition tech to local police departments. Microsoft Chief Executive Officer Satya Nadella proposed similar principles in 2016, without mentioning the military.

In Google’s new principles, the company pledges not to pursue AI applications for weapons and technologies that "gather or use information for surveillance," in violation of accepted human rights laws. The principles also state that the company will work to avoid "unjust impacts" in its AI algorithms by injecting racial, sexual or political bias into automated decision-making.

In addition to outside criticism, Google has faced a rare spate of objections from its own staff. More than 4,000 employees signed a petition calling for the cancellation of the Project Maven contract, citing Google’s history of avoiding military work and worries about autonomous weapons. Last week, cloud chief Diane Greene said Google would not renew the deal when it expires next year -- an unusual withdrawal from a business deal.

Google staff and outside researchers have also criticized Google management for poor communication about Project Maven. Before Thursday, Peter Asaro, an associate professor at The New School who organized a letter from academics against the project, said he would welcome Google’s set of principles, hoping that they would set strong restrictions on using AI to make autonomous weapons and using consumer data in military applications. The staff that opposed the Project Maven deal also noted, in an internal email on Friday, that they would look closely at the charter and weigh in.

"While this is our chosen approach to AI development, we also understand that there is room for many voices in this conversation," Pichai wrote in the blog post. "And we will continue to share what we have learned about ways to improve AI technologies and practices."