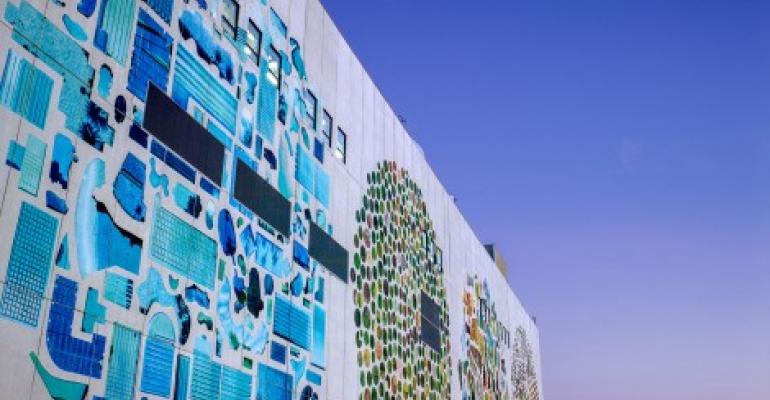 Mural by Jenny Odell on one of the walls of Google&#8217;s Mayes County, Oklahoma, data center (Photo: Google)
Cloud Computing and Edge Computing>IaaS and PaaS

(Bloomberg) -- Google just paid for part of its acquisition of DeepMind in a surprising way.

The internet giant is using technology from the DeepMind artificial intelligence subsidiary for big savings on the power consumed by its data centers, according to DeepMind Co-Founder Demis Hassabis.

In recent months, the Alphabet unit put a DeepMind AI system in control of parts of its data centers to reduce power consumption by manipulating computer servers and related equipment like cooling systems. It uses a similar technique to DeepMind software that taught itself to play Atari video games, Hassabis said in an interview at a recent AI conference in New York.

The system cut power usage in the data centers by several percentage points, "which is a huge saving in terms of cost but, also, great for the environment," he said.

See also: Google Has Built Its Own Custom Chip for AI Servers

The savings translate into a 15 percent improvement in power usage efficiency, or PUE, Google said in a statement. PUE measures how much electricity Google uses for its computers, versus the supporting infrastructure like cooling systems.

Google said it used 4,402,836 MWh of electricity in 2014, equivalent to the average yearly consumption of about 366,903 US family homes. A significant proportion of Google’s spending on electricity comes from its data centers, which support its globe-spanning web services and mobile apps.

See also: Here's How Much Energy All US Data Centers Consume

Saving a few percentage points of electricity usage means major financial gains for Google. Typical electricity prices companies pay in the US range from about $25 to $40 per MWh, according to data from the US Energy Information Administration. (Prices in different regions range from a few dollars to more than $100). Either way, saving 10 percent on data center power consumption, for instance, could translate to hundreds of millions of dollars in savings for Google over multiple years. Google acquired DeepMind in 2014 for 400 million pounds, or more than $600 million at the time, according to The Guardian.

The application of DeepMind’s technology builds on previous efforts by Google to apply machine learning, a type of AI, to its data centers. Back in 2014, the company said it used neural networks, a type of pattern recognition system, to predict how its power usage would change over time, letting it arrange equipment in more efficient ways.

The DeepMind work goes a step further. Instead of making moves in an Atari game, the software changes how equipment runs inside the data centers to get the highest score -- in this case more efficient consumption of electricity.

"It controls about 120 variables in the data centers. The fans and the cooling systems and so on, and windows and other things," Hassabis said. "They were pretty astounded."

This is just the beginning of the project, Hassabis said. Now that DeepMind knows the approach works, it also knows where its AI system lacks information, so it may ask Google to put additional sensors into its data centers to let its software eke out even more efficiency.

See also: What Cloud and AI Do and Do Not Mean for Google Data Centers