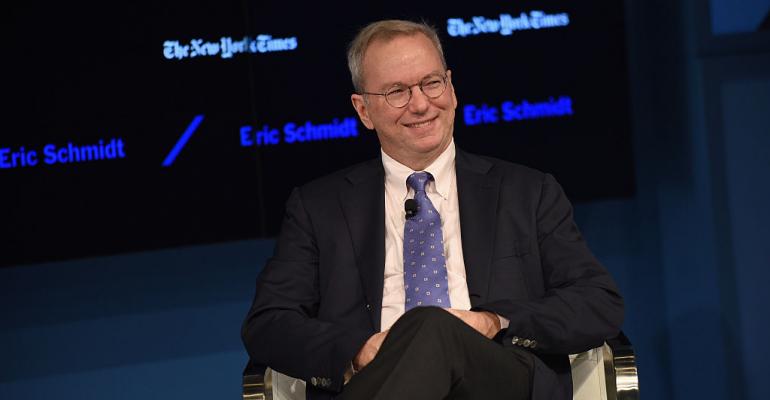 Schmidt will become a technical adviser to Alphabet while continuing to serve as a director, the company said Thursday in a statement.

After 17 years in senior management, Schmidt is relinquishing his executive chairman role. He was recruited from Novell Inc. when Google had just 200 employees; now it’s a dominant global force in search, online advertising and video. The founders -- in their 20s when Schmidt came aboard -- know how to build it from here. And they have help from newer leaders like Google Chief Executive Officer Sundar Pichai, Chief Financial Offer Ruth Porat and cloud head Diane Greene.

Schmidt, 62, will become a technical adviser to Alphabet while continuing to serve as a director, the company said Thursday in a statement. Alphabet expects the board to appoint a non-executive chairman.

Schmidt served as Google’s chief executive officer for 10 years until 2011, when he handed the reins to co-founder Larry Page. He was initially brought in to add more seasoned leadership to the fast-growing startup, as the "adult supervision" for the founders overwhelmed by the company’s rapid growth.

Schmidt presided over successes such as Google’s initial public offering in 2004; the launch of Gmail, Maps and the Chrome browser; the acquisition of YouTube in 2006; and the rise of Android into the world’s largest mobile operating system. When he joined as CEO in 2001, Google had fewer than 15 million unique monthly visitors online. A decade later, when he changed roles, that number topped a billion.

Schmidt also navigated more challenging issues. He argued in Google’s corner when the U.S. Federal Trade Commission launched an antitrust probe into its search service, and negotiated for the company in overseas jurisdictions that are more critical of the company’s practices than the U.S.

“They’ve been acting like a more mature, long-term thinking company for a while now, and that’s what he was brought in to do,” said Bob O’Donnell, chief analyst at Technalysis Research. “They’ve got a more mature team in the leadership office, they’ve brought some good names.”

Schmidt’s public image -- speaking out on regulatory issues, mingling with world leaders at Davos and becoming a fixture at the Burning Man festival in the Nevada desert -- contrasted with the Google co-founders’ preference to be more private. Schmidt became an ambassador for the company to other governments and corporate leaders, allowing Page and fellow founder Sergey Brin to focus on inventing.

Outside Google, Schmidt led a sometimes controversial life. He was deeply involved in financing and strategy for Democratic presidential candidates in the U.S., including Hillary Clinton -- and was even seen wearing a "staff" badge at one of her campaign parties in November 2016. That’s made him less of a policy asset under the Trump administration and with Republicans in power.

Schmidt’s private life may also be more of a liability these days. He pursued romantic relationships with several women while maintaining his marriage, according to the New York Post, Vanity Fair and other publications. This year, the male-dominated tech industry has been hit by several scandals over harassment and other mistreatment of women. Google had to deal with internal complaints about gender inequality after it fired a male engineer who wrote a memo saying women are biologically less suited than men to be engineers.

Alphabet didn’t provide a reason for the move. In the statement, Schmidt said that he, Brin, Page and Pichai “all believe the time is right in Alphabet’s evolution for this transition.” He added that he’s been spending a lot of time in recent years on science and technology issues as well as philanthropy and plans to expand that work. Alphabet’s shares were little changed in early trading Friday in New York.

One former Google executive said it was surprising Schmidt hadn’t relinquished the chairman role sooner, noting that Page and Brin are firmly in command and have been for at least a couple of years. The person asked not to be identified talking about private company matters.

In 2015, Google re-organized into the broader Alphabet holding company, a change that Schmidt helped oversee. As part of that shift, Page took over as CEO of the parent company while naming Pichai head of the Google division. In July, Pichai joined the board of directors.

Schmidt also spent more time working on his philanthropic endeavors. He owns about 1.3 percent of the Mountain View, California-based company, and is worth about $13.6 billion, ranking him 96th on the Bloomberg Billionaires Index.