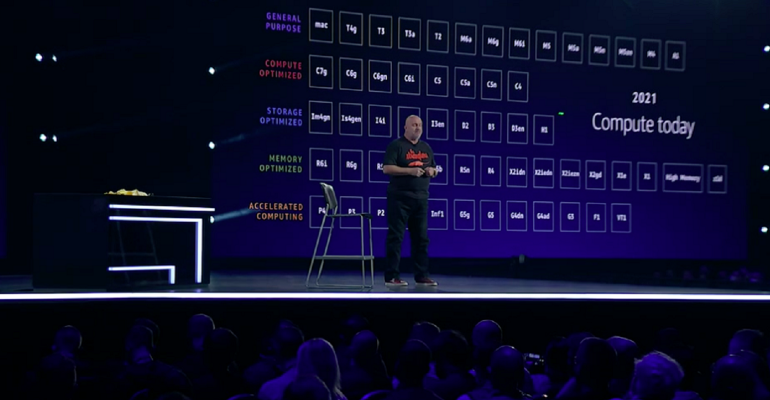 On the final day of the re:Invent 2021 hybrid conference in Las Vegas, Amazon Web Services CTO Werner Vogels outlined the progress the AWS cloud platform has made over the last 15 years while also announcing new services.

Back in 2006, AWS only offered a handful of services, said Vogels (pictured) in his re:Invent 2021 keynote on Dec. 2, adding that each service was a “simple machine” that could be customized and scaled. The new services that AWS has built since then have been driven by user demand, he added.

"We have well over 200 of these simple machine services," Vogels said. "Believe me, I know it's sometimes overwhelming, but remember—you asked for it, so this is basically your fault."

During his keynote, Vogels discussed the challenges organizations have faced building a global wide area network (WAN) that connects across all cloud resources.

Larger organizations can have hundreds or even thousands of virtual private cloud (VPC) instances on AWS that all need to be connected and managed, he said. To help solve that challenge, Vogels announced the new AWS Cloud WAN service, which enables organizations to build, manage and monitor a WAN using AWS.

"It basically gives you a highly reliable and highly available software-defined wide area network running over the AWS infrastructure," he said.

Enabling organizations to more easily build applications that run in the cloud was a core theme of Vogels’ keynote. Among the new services he announced at re:Invent 2021 is the AWS Amplify Studio, a low-code visual environment for developing cloud applications.

"It's really a developer-first approach, and it's truly a low-code visual environment where you can literally build web apps and mobile apps in a matter of hours," Vogels said.

Vogels asked Ali Spittel, senior developer advocate at AWS, to demonstrate how easy Amplify Studio makes it to build an application. The new service, according to Spittel, integrates with the Figma user interface design tool, enabling designers to build graphics in a separate workflow.

To help organizations provision the right resources needed for a given workload, AWS launched the AWS Cloud Development Kit (AWS CDK) in 2019.

At re:Invent 2021, Vogels announced a preview of the second version of CDK, which he said fixes some of the issues that emerged with the first version. CDK version 2 will use semantic versioning to help users better understand what versions of a particular object is being used, he said.

CDK can plug into a large number of different types of resources, and to help make it easier for developers to find resources, Vogels announced the new Construct Hub.

"Construct Hub is an environment that actually gives you access to find all the open-source and partner cloud development kit libraries that are out there," he said.

At the end of his keynote and retrospective on 15 years of new service development at AWS, Vogels referenced lyrics from the song “Harder, Better, Faster, Stronger” from rock band Daft Punk (which he called a famous philosopher).

"Why have we created all these services and all these features?" Vogels asked. "I think the words of the famous philosopher Daft Punk are really applicable here—work it harder, make it better, do it faster, makes us stronger."