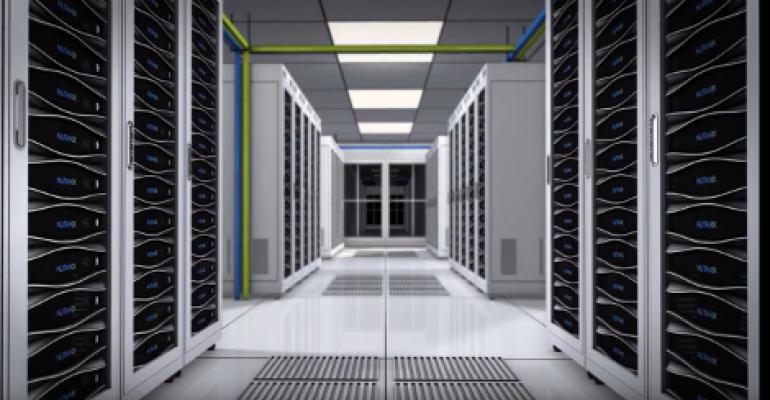 As HCI becomes less of a hardware play, some vendors lose and others win dominant positions on the latest Magic Quadrant.

At first glance, the new Gartner Magic Quadrant for hyper-converged infrastructure seems to show bad news for some of the featured vendors. But, as Gartner research director Jon MacArthur explained to Data Center Knowledge, this report uses such a different definition of “hyper-converged” and has so much narrower a focus, that you can’t compare vendor positions to previous years. In particular, software-only, “bring-your-own-hardware” hyper-converged systems have become significant enough to earn a place in the report, because they’re increasingly competing with hyper-converged hardware appliances.

“Most of the core technology is starting to shift to software. If you buy a vSAN ReadyNode from Lenovo or Cisco, or HPE, or your pick of server platform, they're all pretty much the same,” MacArthur said. “Customers are evaluating vSAN and ReadyNode, not so much the hardware. Dell EMC VxRAIL is a popular deployment model for vSAN, but so is putting VMware on your own choice of hyper-converged hardware.

Whether a buyer goes an appliance or does the integration work on their own depends on their level of sophistication, he explained. Also, special needs like rugged hardware, for example, can lead retail or military clients to do hardware assembly on their own, putting the computing equipment in purpose-built boxes.

That means Microsoft and VMware’s hyper-converged software has matured enough to now appear in the Magic Quadrant. “With Microsoft and Storage Spaces Direct, they significantly improved their capability and started to get to a level of maturity such that they've now got thousands of customers using that as their hyper-converged stack.” 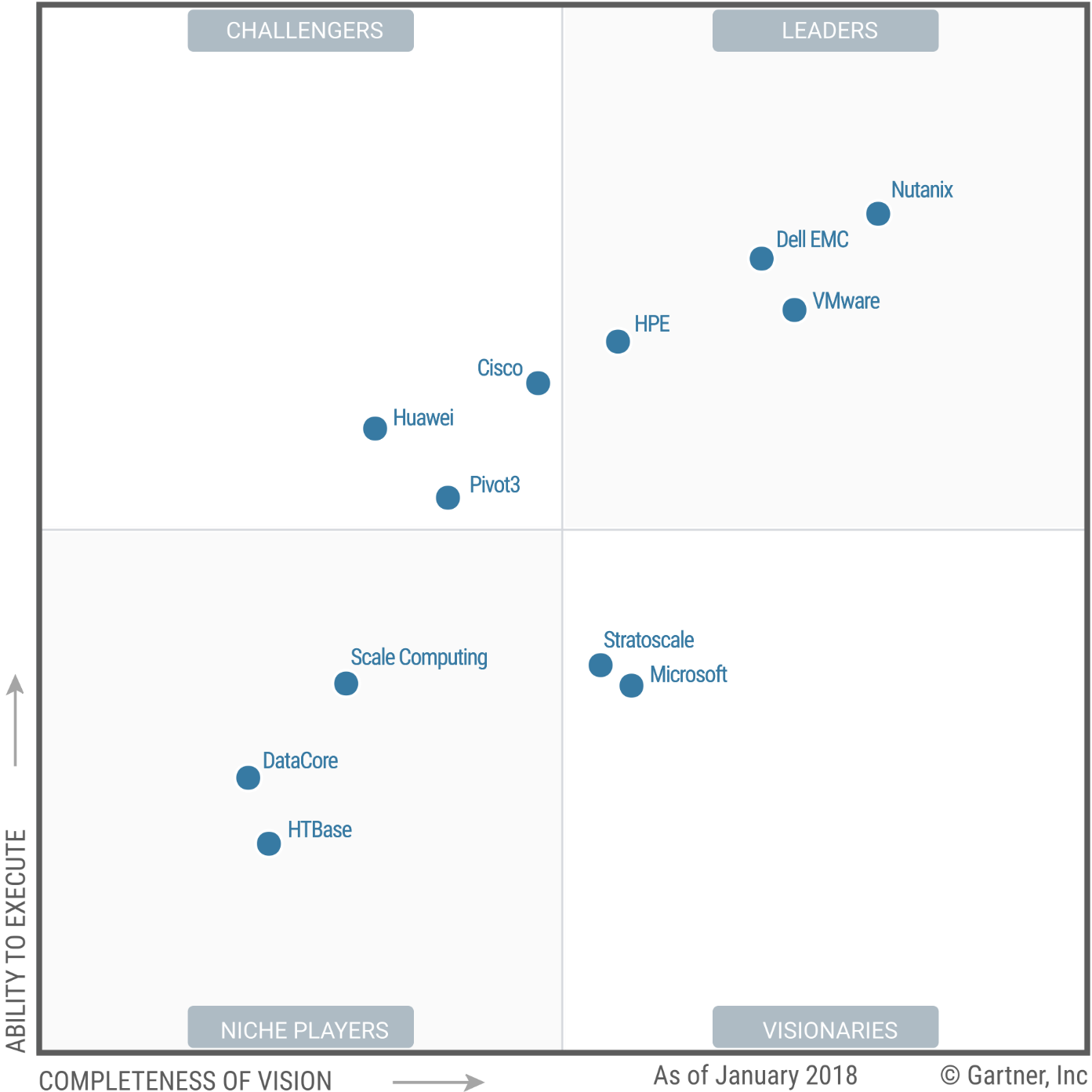 [Top company in the Niche Players quadrant is Scale Computing. We'll be interviewing Scale's founder, Jason Collier, on the Data Center Knowledge stage at the Data Center World Global conference in San Antonio, Texas, in March. Click here to register for the event.]

Increasingly, enterprises are starting to create three pools of capabilities in their data centers. “One is integrated systems or older-school three-tier architecture for their absolute mission critical ‘can't go down’ applications,” MacArthur said. He emphasized that hyper-converged infrastructure isn’t displacing these systems but sitting alongside them. Gartner predicts that only 20 percent of business-critical applications currently deployed on three-tier IT infrastructure will have moved onto hyper-converged infrastructure by 2020.

“If you're running high-end mission critical Oracle or SAP apps, you might run that on hyper-converged infrastructure, depending on the scale, but today you’d probably run that on an integrated system or classic three-tier architecture. Then, they're moving their general-purpose workloads to hyper-converged, and they're starting to experiment more with the cloud.”

The disadvantage of this is complexity. “They do end up having multiple infrastructures they have to manage. You do end up, at least for the near term, with more silos. One of the things you'll start to see is more and more vendors making noise about their ability to manage across all thee deployment models: cloud, hyper-converged, and integrated systems.”

In some cases, enterprises see hyper-converged infrastructure as part of their journey to cloud, making dedicated hardware appliances less attractive. This is especially true for those using Microsoft Azure and Azure Stack. They go with a full-stack Microsoft offering, thinking two or three years later they can run on hybrid cloud or fully in the cloud.

The same is true with VMware and Nutanix. (The latter has an appliance but also sells software on multiple OEMs’ hardware.)

“Then you’ve got SimpliVity with their hardware acceleration, which provides tremendous value for the environment they’re going into,” MacArthur added. “Their dedupe compression card delivers a service level to a lot of companies to start to replace backup solutions with native deploys of SimpliVity.” Since early last year, SimpliVity has been part of HPE.

Whether you choose a preconfigured system or a software stack with your choice of appliance or BYO hardware, many hyper-converged systems combine elements from multiple vendors, which has support implications, MacArthur notes. “Does the vendor have the ability to take level-one and level-two support calls for the full stack or just a portion of that? Some customers may be fine managing complex support requirements, but if you’re focused on hardware appliances, you only want to make one call. Those customers don’t care what's inside, only who's going to support it.”

Hyper-converged infrastructure continues to evolve significantly. Even without the focus on software, in this new report the market looks very different from just a year ago. “Roll back 12 months, and HPE had just acquired SimpliVity, Cisco had not yet acquired Springpath, Nutanix was an appliance builder with a couple of OEM partners and had not really launched the cloud software focus they have today, and Dell had just completed the acquisition of EMC. There are a lot of moving pieces here, and I would expect a lot of movement in the coming 12 months too.”

As always, it’s a mistake to focus only on the vendors in the top right corner of the Magic Quadrant. MacArthur encouraged enterprises to consider both regional and emerging vendors. Huawei is in the Challenger quadrant despite having almost no traction in North America. “If you’re in Asia Pacific, they should absolutely be shortlisted, and maybe if you’re in EMEA too.”

Pivot3 has a relatively small number of customers, but he called out both their reputation for customer support and the new Acuity platform that moves beyond its previous video surveillance and VDI focus. “You can begin to think about Pivot3 more for enterprise workloads,” he noted.

Similarly, the new focus for the Magic Quadrant means Cisco isn’t in the Leader quadrant, but that shouldn’t stop enterprises considering HyperFlex, even though it’s not as well-known as Nutanix or Dell EMC’s VxRail. “Cisco is a significant player in the integrated systems market with a huge customer base; although they're in the challenger quadrant, Cisco should absolutely be on the consideration list for companies, as they're looking at hyper-converged offerings. If they only look at the top two or three vendors, they're missing out on some opportunities.”

Sponsored Content
Case Study: Fashion made faster, simpler, and more scalable than ever before
Aug 02, 2018