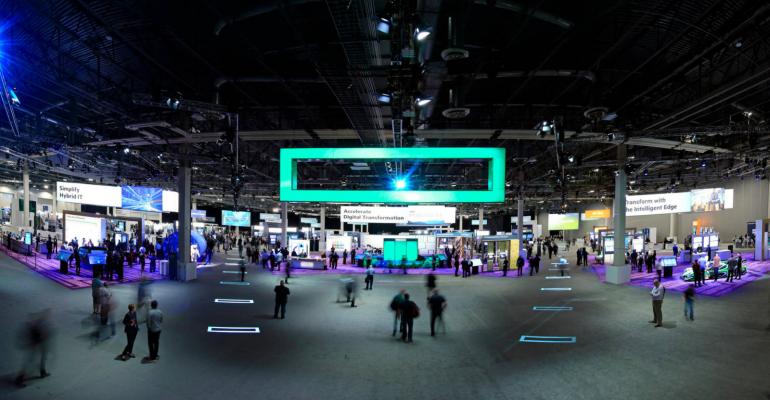 HPE Goes After the Red-Hot VDI Market Stoked by Pandemic

The company says its latest hyperconverged infrastructure appliance doubles the amount of virtual desktops it can support.

Going after the suddenly red-hot virtual-desktop opportunity stoked by the COVID-19 pandemic, Hewlett Packard Enterprise said its newly launched hyperconverged infrastructure appliance doubles the maximum number of virtual desktops per server, thanks to AMD’s Epyc 2 processor that powers it.

The appliance was one of two new hyperconverged infrastructure offerings HPE introduced earlier this month to help companies deploy virtual desktop infrastructure (VDI) quickly and cost-effectively to handle the influx of employees who need to work from home during the pandemic.

To put it another way, the appliance lowers the cost of each virtual desktop by 50 percent, he said.

HPE also announced that its HPE Nimble Storage dHCI offering is now available through the HPE GreenLake private cloud service, enabling companies to deploy VDI as a service through a monthly subscription. Through GreenLake, customers can convert a capital expense to an operating expense, Osborne said.

Steve McDowell, senior analyst for storage and data center technologies at Moor Insights & Strategy, said VDI is seeing huge adoption, as companies race to support a remote workforce. That’s a challenge for IT, and HCI solutions are a fast way to deploy and scale VDI.

“We are in an environment now where people are forced to work from home, and it’s forcing IT to look for solutions to manage that,” McDowell said. “VDI is a way they are doing that, and it’s a natural app for HCI. And what HPE is doing is a great way to deploy it in an affordable way.”

HPE competes against Dell Technologies, Nutanix, Cisco, Lenovo, and others in the fast-growing HCI market, which reached $2.28 billion in revenue during the 2019 fourth quarter, according to IDC.

Dell has the largest market share with 33.3 percent, followed by Nutanix at 13.7 percent. HPE, which owns 5.1 percent of the market, is in a statistical tie for third place with Cisco and Lenovo, IDC estimates.

The new SimpliVity hyperconverged appliance, which comes in a 1U form factor, will ship in late May, the company said.

The entry-level appliance is based on the HPE ProLiant DL325 server released in January, McDowell said. The Epyc 2 chip doubles its VDI capacity because of its high core count: up to 64 cores in a single socket.

The high core count also reduces the cost of VDI software for enterprises. VDI software licenses are charged on a per-socket basis, so a more powerful processor with a lot of cores gives customers better price-performance ratio, McDowell said.

“The more power you can get per socket, the lower the costs are, and what they are doing here is doubling the amount of VDI sessions,” he said. “You get a lot of oomph in a small package.”

HPE Nimble Storage dHCI (disaggregated HCI), available now, is software that allows enterprises to manage existing compute and storage infrastructure as a hyperconverged system. “It’s a software stack you can put into an existing VMware cluster and turn it into an HCI-like experience,” McDowell said.

HPE CEO Antonio Neri last year pledged to make everything it sells available as a service on GreenLake, and this is the latest step in that direction.

During the second half of 2020, HPE said, Nimble Storage dHCi will add support for HPE ProLiant DL325, DL385, DL560, and DL580 servers, increase the number of servers it supports per cluster from 20 to 32, and offer one-click software upgrades.