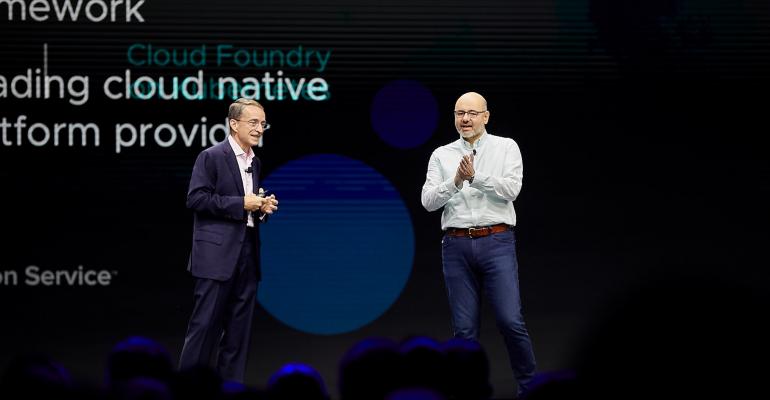 VMware
VMware CEO Pat Gelsinger (left) on stage at VMworld 2019 with Joe Beda, a principal engineer at VMware and one of the three original creators of Kubernetes.
Cloud Computing>Hybrid Cloud

It has an attractive message for enterprises making the transition to containers and cloud, but can it win net new cloud-native workloads from the hyperscalers?

VMware announced several new cloud services and capabilities on its partners’ hyperscale cloud platforms Tuesday, as it kicked off its virtual VMworld 2020 conference.

It has added support for Tanzu Mission Control for VMware Cloud on AWS, which is available immediately. Tanzu Mission Control is VMware’s software for centralized management of Kubernetes resources deployed across a variety of clouds or on-prem data centers. Tanzu is also now available as a preview on Google Cloud VMware Engine and as part of the Oracle Cloud VMware Solution. VMware is working with Microsoft to launch a Tanzu preview on Azure soon, a VMware spokesman said.

Tanzu Mission Control is part of the Tanzu portfolio of Kubernetes products integrated into VMware Cloud Foundation software, which allow customers to run and manage VM-based and container-based applications across a hybrid cloud environment.

The theme running across VMware’s partnership announcements Tuesday was VMware as a one-stop software shop for enterprise customers’ multi-cloud needs, Matt Morgan, VP of global marketing for VMware’s cloud services, told DCK in an interview. The promise is that companies can easily and seamlessly migrate their apps to any public cloud without having to refactor them.

“Our customers are asking how they can maximize the value of the multi-cloud world. Many of them have found themselves in a place where each and every cloud is requiring a separate stack, a separate operating team…. And they are trying to unify it,” Morgan said. “We want to help businesses unify the cloud, and we have enormous breadth and depth of technology and great partnerships to do that.”

VMware has spent the past few years partnering with cloud providers to beef up its hybrid cloud and multi-cloud strategy.

The partnerships with cloud providers allow VMware to leverage its large installed base of on-premises vSphere customers to capture revenue from the hybrid cloud trend. On the flip side it helps the cloud vendors get more enterprise business.

“It’s incremental, but they are all nice additions,” he told us.

VMware Cloud on AWS tends to get the newest VMware features first, such as Tanzu support, because AWS is VMware’s preferred cloud partner, Chen said. VMware co-engineered the cloud service with AWS and manages it.

The company tests new features on VMware Cloud on AWS, gets experience on it, and works out the kinks before making them available on the other clouds. “VMware Cloud on AWS is the proving ground for their technologies, and over time it will trickle down to the others,” Chen said.

Here are some more highlights from VMworld announcements Tuesday by VMware:

VMware’s message of being a unifying force in a multi-cloud world now gains more credibility because the company has partnered with all the major cloud providers. But in truth, enterprise customers have diverse environments, and while VMware’s platform is widely deployed, it is just one of many platforms available, Chen said.

Some apps will be lifted and shifted, and VMware will be a popular platform for that. But when enterprise customers build new, cloud-native apps, they may choose the hyperscale cloud solutions instead.

“A lot of the net new cloud-native apps will go to cloud providers, and that’s one area that VMware has to work on,” Chen said.

Think Like a Chief Innovation Officer and Get Work Done
Oct 13, 2020