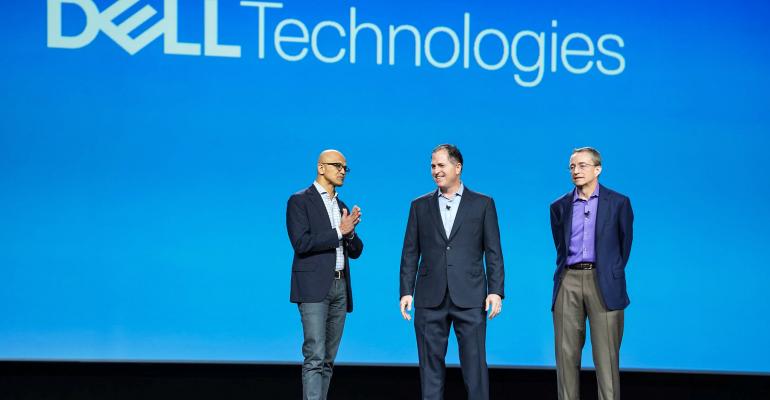 Dell, VMware, and Microsoft executives on Monday finally announced what has appeared inevitable for a couple of years now: VMware, a Dell subsidiary, is coming to Microsoft Azure to give VMware users a consistent experience in their own data centers and in the world’s second largest public cloud.

Light on details, the announcement, made during the opening keynote of Dell Technologies World in Las Vegas, included integration across several Microsoft products. One of them is on the infrastructure front, promising customers the ability to extend their on-premises VMware environments to Azure data centers.

VMware announced it would integrate with Amazon Web Services, the world’s largest public cloud, in 2016. Its strategy in recent years has been to build technologies that help customers use multiple cloud providers and multiple types of infrastructure. With that in mind, it would only be a matter of time before VMware would make a similar one with Azure.

The partnership “brings all of the VMware capabilities natively to Azure and Azure customers,” Microsoft CEO Satya Nadella said from stage at Dell’s big annual conference.

According to a Dell press release, the company expects app migration, data center expansion, disaster recovery, business continuity, and modern application development to be “some of the more popular customer scenarios” for the integrated offerings.

Cloud providers and enterprise technology vendors like Dell, VMware, and Hewlett Packard Enterprise have all embraced the idea that most companies are going to keep some portion of their workloads in their own data centers while taking advantage of multiple cloud services as they see fit. In this hybrid cloud world, VMware is a gatekeeper of sorts, saying that its software runs in 500,000 customers’ data centers.

Despite being in fierce competition with each other, cloud providers like AWS and Azure are “staring at 500,000 VMware customers” and millions of VMware-trained IT workers and want to integrate with that ecosystem, Matt Baker, senior VP of strategy and planning at Dell’s enterprise tech unit Dell EMC, said during a Dell press event in San Francisco earlier this month.

Microsoft has at least dabbled in roping some VMware customers into the Azure ecosystem in the past. In 2017, it previewed a hosted VMware stack product, running on dedicated hardware in Azure data centers. Microsoft apparently built the service without VMware’s involvement. VMware criticized the move and said that its partnership with AWS was meant to address the “clear limitations to a hosted VMware solution” like Microsoft’s.

Unlike AWS, Microsoft has a long history in the enterprise IT market and a massive enterprise install base of its own. But its biggest foray into hybrid cloud, the Azure Stack, has seen modest success, according to Baker. “Azure Stack has been out there for a long time and hasn’t moved much,” he said. (Dell is one of Microsoft’s partner vendors that sell hardware for Azure Stack software.)

Integration with VMware is a different, less disruptive approach to hybrid cloud than Azure Stack. Instead of selling customers a mini version of Azure to install in their own data centers, it’s giving them an ability to use the same VMware tools they already know while using Microsoft’s global hyperscale cloud platform – interconnected seamlessly with their on-premises environment.

The executives didn’t share an expected availability date for the offering, and a Dell spokesperson did not respond to a request for comment in time for publication. If the rollout is anything like the rollout of VMware on AWS, don’t expect availability soon. The AWS integration required deploying VMware cloud infrastructure on bare-metal servers inside Amazon data centers and many other “deep modifications on both sides,” Kit Colbert, VMware VP and CTO of its Cloud Platform business unit, told us last year.

VMware cloud launched in a single AWS availability region almost a year after the AWS partnership was announced, and it’s still not available in all the regions. “By the end of [this] calendar year we will support them all,” Colbert said at the press event this month.

VMware is the provider and operator of VMware on AWS. It’s unclear whether it will follow a similar model for the Azure offering.

One very deep integration the companies said they were only “exploring” at this point (among others) would be between VMware’s network virtualization platform NSX and Azure Networking. Another one would be giving customers the ability to manage some specific Azure services with VMware management tools.

In-progress integrations also included in Monday’s announcement are between VMware’s Workspace One and Microsoft’s Intune and Azure Active Directory; between Microsoft 365, Workspace One, and Dell Provisioning Services; and between VMware Horizon Cloud and Azure. Tech previews for the initial capabilities in this group will be out by the end of the year, Dell said.