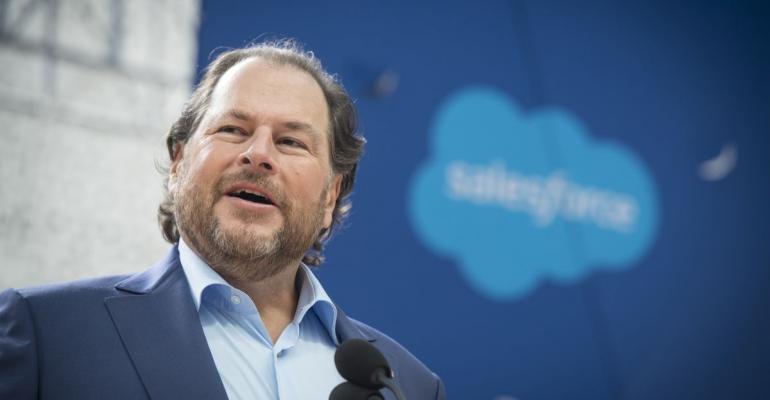 Salesforce.com Inc., a maker of cloud-based customer-relations software, is the latest technology company to embrace the idea of having two chief executives, by promoting Keith Block to run the company alongside co-founder Marc Benioff.

(Bloomberg) -- Salesforce.com Inc., a maker of cloud-based customer-relations software, is the latest technology company to embrace the idea of having two chief executives, by promoting Keith Block to run the company alongside co-founder Marc Benioff.

Block started with the San Francisco-based company in 2013, became chief operating officer in 2016 and also serves as vice chairman. He’ll remain a director, Salesforce said in a statement late Tuesday.

Salesforce has been expanding into new areas, such as marketing and e-commerce, as Benioff seeks to make the company a top source of internet-based software for all kinds of business programs once hosted by companies on their own computer servers. That’s put it into direct competition with Oracle Corp., which also has two CEOs. Salesforce said Benioff will lead technology, marketing, stakeholder engagement and culture, while Block will be in charge of growth strategy, execution and operations.

“It lets Benioff do what he does best and maybe takes a bit of pressure off of him,” said Pat Walravens, an analyst at JMP Securities. “This is a big company that keeps getting bigger; they need a sustainable leadership structure.”

Salesforce dominates the market for software that manages customer relationships, the business that made it an early leader in corporate cloud computing. It acquired MuleSoft Inc. for $6.5 billion — its largest-ever purchase — in May to challenge Oracle in integration software that connects various systems.

Oracle has had dual CEOs since 2014, when co-founder Larry Ellison handed over the titles to his deputies, Safra Catz and Mark Hurd. The arrangement has worked so far, with Catz focused on finance and deals, while Hurd oversees sales and marketing. Huawei Technologies Co. has a rotating CEO structure, which doesn’t appear to be a distraction for the business. The arrangement isn’t always successful: BlackBerry Ltd.’s co-CEO structure was dissolved as the company’s device sales were pummeled by the rise of smartphones.

Block, in an interview with Bloomberg in March, said that he has a “great partnership” with Benioff, who has led Salesforce since co-founding the company in 1999. The billionaire has has been active in philanthropy in his hometown of San Francisco, and has been involved with politics, backing Hillary Clinton in the latest U.S. presidential election. “He’s a great guy to work with. I enjoy working with him very much. We collaborate on just about everything,” Block said.

Salesforce’s profit and sales have been growing steadily. The company raised its full fiscal year revenue forecast when it announced quarterly earnings in May. Salesforce’s shares have gained 41 percent this year and closed Tuesday at $144.44, and the company plans to report quarterly results for the May-July period on Aug. 29.

Asked whether the changes at Salesforce meant that Benioff is preparing to step away from the business, Walravens said: “Benioff’s mentor, Larry Ellison, is 73 and still executive chairman of Oracle. Benioff is 53. So, barring some unexpected development, I don’t think Benioff will step down anytime soon.”