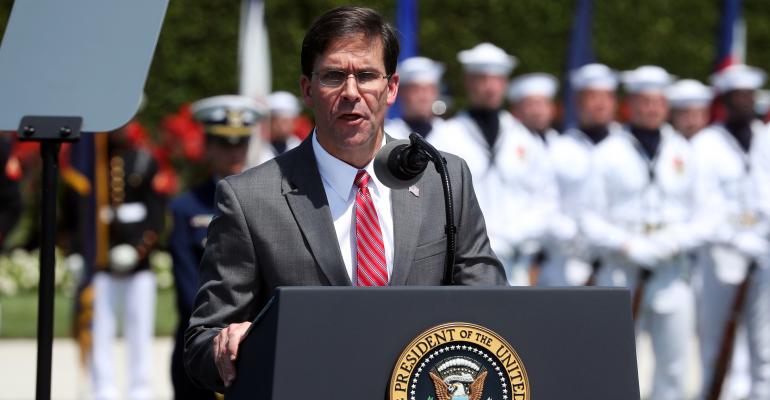 Trump stunned tech companies, the Defense Department and lawmakers this month when he openly questioned whether the pending contract is being competitively bid.

(Bloomberg) -- New Defense Secretary Mark Esper ordered a review of the Pentagon’s cloud-computing contract after President Donald Trump endorsed criticism that Amazon.com Inc. is being given an unfair advantage for the contract valued at as much as $10 billion.

Esper, who took charge of the Pentagon last week, is looking at the contract and “no decision will be made on the program until he has completed his examination,” Elissa Smith, a Defense Department spokeswoman, said in a statement Thursday.

Trump stunned tech companies, the Defense Department and lawmakers this month when he openly questioned whether the pending contract is being competitively bid. He said he’d heard complaints from companies such as Microsoft Corp., the No. 2 contender, and Oracle Corp., which was eliminated from the competition earlier this year. Both have argued that the terms favored Amazon, whose founder, Jeff Bezos, is one of the president’s longtime nemeses.

The project, which had been championed by former Defense Secretary Jim Mattis, was never supposed to be this controversial. The goal is to bring the Pentagon’s technology into the modern era. Despite criticism, the Defense Department maintained that the system would work best if a single company created a single data repository for use from generals at the Pentagon to warfighters in the field.

“Secretary Esper is committed to ensuring our warfighters have the best capabilities, including artificial intelligence, to remain the most lethal force in the world, while safeguarding taxpayer dollars,” Smith said in the statement. “Keeping his promise to members of Congress and the American public, Secretary Esper is looking at the Joint Enterprise Defense Infrastructure (JEDI) program.”

Even before Trump weighed in, a number of lawmakers had questioned the contract requirements. Among them was Republican Senator Marco Rubio of Florida, who said in a statement Thursday that “I look forward to working with Secretary Esper to ensure that any JEDI award provides the most capable solution to the warfighter.”

Dana Deasy, the Defense Department’s chief information officer, has said the JEDI contract wouldn’t be awarded until late August at the earliest, so Esper’s review wouldn’t necessarily result in a major delay if it postponed the award into September.

Oracle lost a legal challenge to the cloud contract on July 12.

The company’s lawsuit claimed that the procurement requirements ruled out most companies and that the process has been marred by conflicts of interest, including ties between former Defense Department officials and Amazon.

Federal Claims Court Senior Judge Eric Bruggink found that Oracle didn’t have standing to challenge the terms of the contract but that at least one of the justifications the Defense Department used to support its single-source strategy for the contract was flawed.

Bruggink also said the conflicts of interest alleged in Oracle’s lawsuit “raise eyebrows” but ultimately the Pentagon was right to determine that they didn’t affect the procurement.

“As DOD has asserted all along, and as confirmed by the Court, DoD reasonably evaluated and equally treated all offerors,” Smith, the Pentagon spokeswoman, said at the time. “The court’s decision unequivocally concludes that JEDI is a full and open competition and, despite uninformed speculation to the contrary, its integrity remains intact.”

Big Tech Is Buying More Clean Energy Than Ever in the Trump Era
Jan 22, 2018