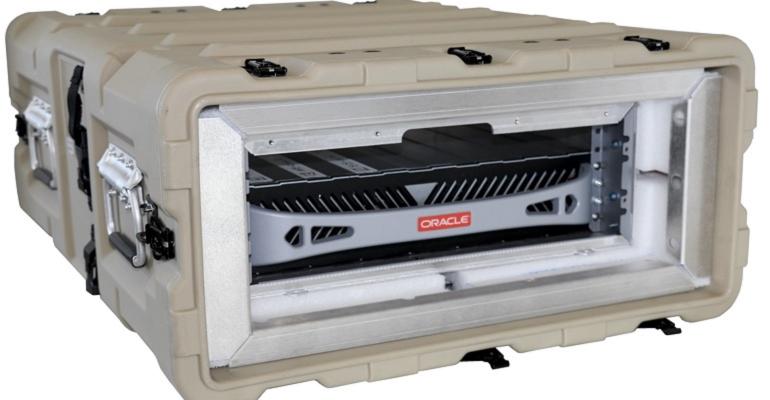 Oracle is growing its portfolio of hybrid cloud services with the new Roving Edge Device, which brings the cloud to the edge of the network.

While many workloads are headed to the public cloud, there is still a clear need for hybrid cloud technologies, according to Oracle.

In a bid to serve the needs of its hybrid cloud customers, Oracle on Feb. 9 announced Roving Edge Infrastructure, which brings ruggedized hardware to the edge of the network. With Roving Edge Devices (pictured), Oracle is filling in its portfolio of hybrid cloud services, which already includes a number of on-premises offerings, including [email protected] and the Oracle Cloud VMware Solution.

Compared with Oracle's [email protected] offering, which involves a large rack of hardware that needs to be installed in an organization's own data center, Roving Edge Infrastructure is a smaller device that can be deployed as a single server or as a cluster that can be installed anywhere, Magouyrk said.

"They can put this in the back of a plane, they can put it out on an oil rig, they can take this to the polar observatory or anywhere you think that you want the benefits of cloud computing but you don't necessarily have the infrastructure," he said. "That's what Rolling Edge Infrastructure is really built for."

The Roving Edge Device, while smaller than Oracle's other hybrid cloud offerings, is not a lightweight. In fact, the device hardware weighs 84 pounds, delivered in an electromagnetically shielded enclosure.

Each Roving Edge Device node has 61 terabytes of storage and 40 CPU cores for compute, with 512 gigabytes of memory and an integrated NVIDIA T4 Tensor Core GPU, Magouyrk said.

"Of course, it has all of the standard services that customers expect, including compute object storage, block storage, virtual networking stack, as well as a way to do functions on the device, as well as GPU-optimized integration for things like machine learning," he said.

Why Hybrid Cloud Is Needed

According to Magouyrk, many organizations find themselves in a difficult position where they want all of the benefits of the public cloud, but they need the flexibility of being able to place resources in their own data center.

"The thing that I want everyone to walk away with is to understand that Oracle is very dedicated to ensuring that we bring all of the benefits of our cloud to customers where they are now," he said.

Magouyrk emphasized that while the public cloud is the future for many types of applications and industries, there is a need to help organizations with the transition, and hybrid cloud services provide that path.

"How we transition from the world that we're in on-premises to the cloud requires a lot of help from cloud providers, and that's the reason that we built the services that we built," he said. "You'll continue to see more of those services coming from Oracle in the coming quarters and years."