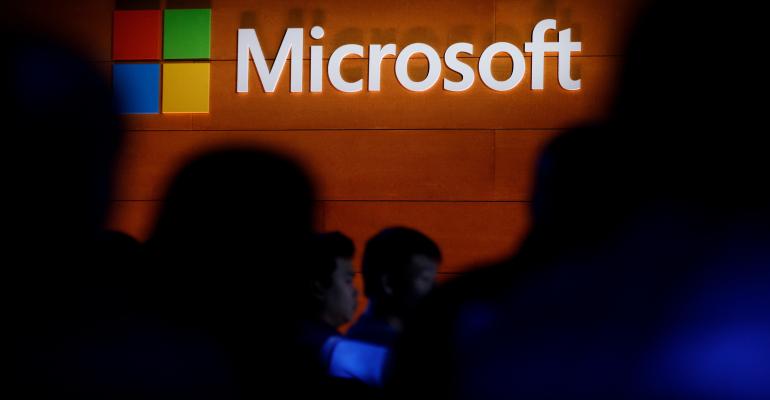 The $10 billion cloud contract -- unthinkable for Microsoft even a year ago -- will likely come at a cost, both legally and internally.

(Bloomberg) -- Microsoft Corp. shares rose to an intraday record after the company scored a major victory in securing a milestone, $10 billion Pentagon contract for cloud computing services. But the contract -- unthinkable for Microsoft even a year ago -- will likely come at a cost, legal and internal.

Amazon.com Inc., the market leader in cloud services, is considering a challenge to the award of the contract to Microsoft’s much smaller Azure business, citing President Donald Trump’s interference in the bidding process, according to a person familiar with the matter. Amazon had been widely considered the front-runner because of its superior size and previous cloud contract with the Central Intelligence Agency.

Meantime, Microsoft employees have protested involvement in the contract, known as the Joint Enterprise Defense Infrastructure, or JEDI, intended to bring U.S. military technology into the modern era.

“We are disheartened that Microsoft accepted the JEDI contract,” a group of employees wrote on Twitter. “As Microsoft workers, we are now complicit of ‘increasing the lethality’ of the U.S. Department of Defense.”

The group, calling itself Microsoft Workers 4 Good, was quoting a Defense Department official’s description of the contract’s goal.

Microsoft shares jumped as much as 3.5% as trading opened Monday in New York from a close of $140.73 on Friday. If it maintains the gain through the day it will notch a new record.

Microsoft has said it will continue to pursue government and military work, despite objections from some employees. The company will also be involved in bids for a second large Defense contract that involves cloud-based email and collaboration software.

Microsoft says workers can request to be moved to other projects. But that is no simple matter in huge cloud efforts: Sales, marketing, engineering and data center operations can involve tens of thousands of workers.

No matter the potential problems, the contract remains a major win for one of the world’s most valuable companies -- showing investors and potential customers that it is a strong alternative to Amazon Web Services, which has been for years considered the default choice.

“This is a paradigm changer for Microsoft,” said Daniel Ives, an analyst at Wedbush Securities who has a “buy” rating on Microsoft. “It’s a landmark win that will change the cloud computing battle over the next decade. It’s a shocker to Amazon and Bezos to lose it.

“But for Microsoft it signals a new era of growth in cloud,” he said. “This adds $10 to the stock in my opinion.”

In the past year, Azure has racked up some large deals from Kroger Co. to AT&T Inc., but a customer as big, demanding and secretive as the Pentagon will go a long way toward cementing Azure’s reputation as a serious contender.

Amazon, which won a lucrative cloud contract with the Central Intelligence Agency in 2013, was seen to have the upper hand in the competition. But politics entered the picture. Trump has long been at odds with Amazon’s Chief Executive Officer Jeff Bezos. The world’s richest man also owns the Washington Post, which Trump claims has treated him unfairly in its coverage.

He added that the company was “the clear leader in cloud computing, and a detailed assessment purely on the comparative offerings clearly lead to a different conclusion. We remain deeply committed to continuing to innovate for the new digital battlefield.”

Amazon Web Services, the retail giant’s cloud computing arm, has a wide lead in the business of selling cloud services to businesses and governments, with $32.5 billion in sales during the most recently reported 12 months.

Microsoft, which doesn’t break out comparable sales for its Azure unit, likely pulled in a fraction of that, analysts say. Based on both companies’ earnings reports last week, Synergy Research Group expects Amazon to boost its share of the market to about 33.5% and Microsoft to rise to around 16.5%.

Trump surprised the industry earlier this year when he openly questioned whether the contract was being competitively bid.

A new book by Guy Snodgrass, a speechwriter to former Defense Secretary Jim Mattis, alleges that Trump, in the summer of 2018, told Mattis to “screw Amazon” and lock it out of the bid. Mattis didn’t do what Trump asked, Snodgrass wrote. Mattis has criticized the book.
Amazon was believed to be the front-runner until Friday evening.

The White House did not respond to a request for comment.

In a statement released later Friday night, the Defense Department said that “the acquisition process was conducted in accordance with applicable laws and regulations. The process cleared review by” the U.S. General Accounting Office and the Court of Federal Claims.

The Pentagon’s inspector general said in a separate statement on Friday night that it had “not found evidence that we believe would prevent the DoD from making a decision about the award of the contract.” The watchdog agency, which was leading a review by “multidisciplinary team of auditors, investigators, and attorneys,” was aiming to have its work done by the end of November.

The Defense Department is investing in commercial cloud services, which host computing power and storage in remote data centers, to improve data security and speed real-time sharing of information across the military.

Intel Engineer: Much Left to Solve Before Cloud and Edge Can Become One
Jan 28, 2020