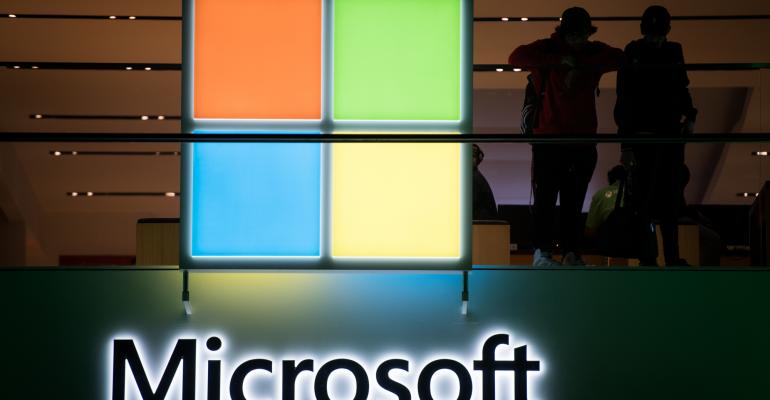 Microsoft Corp.’s quarterly sales and profit topped estimates on the strength of the company’s cloud-computing business, which racked up clients for Azure web services and Office productivity software.

(Bloomberg) -- Microsoft Corp.’s quarterly sales and profit topped estimates on the strength of the company’s cloud-computing business, which racked up clients for Azure web services and Office productivity software.

Profit before certain items in the fourth quarter, which ended June 30, rose to $1.37 a share, compared with the $1.22 average forecast of analysts polled by Bloomberg. Revenue rose 12% to $33.7 billion, the Redmond, Washington-based company said Thursday in a statement, compared with the $32.8 billion projection.

Chief Executive Officer Satya Nadella is working to keep up a steady flow of cloud deals, seeking to center Microsoft’s strategy on web services and narrow the gap with market leader Amazon.com Inc. As more companies move to the cloud and upgrade aging software, they’re signing up for Azure and newer products like Microsoft 365 -- a package of Office 365 cloud software, Windows 10 and security programs.

“Everything has been going well for them,” said Sid Parakh, a portfolio manager at Becker Capital Management, which counts Microsoft as its biggest holding. “It’s the structural winner right now -- as more and more companies move to the cloud, it’s largely Amazon and Microsoft in the running for those deals.”

The company’s shares rose 1.2% in extended trading following the report. Microsoft rose 15% in the quarter, compared with a 3.8% gain in the S&P 500 Index. The stock has jumped on optimism about the company’s cloud business, and on some investors’ belief that Microsoft is a safe haven as U.S. and European regulators sharpen their scrutiny of other large technology firms.

Commercial cloud revenue -- a measure of sales from Azure, internet-based versions of Office software and some smaller products -- rose 39% from a year earlier to $11 billion. Profit margins in the business widened by 6 points to 65%.

Sales of Office 365 software to businesses jumped 31%. Azure cloud sales rose 64%, compared with 73% growth in the previous quarter and 76% in the one before that. That continued deceleration has caused some concern among investors -- Azure growth was routinely more than doubling as recently as two years ago. Still, swelling profit margins in cloud have helped to offset those worries.

Since the close of the quarter, Microsoft signed new cloud deals with Providence St. Joseph Healthand ServiceNow Inc., which said it will use Azure to deliver cloud products to some government customers -- the first time that company has used third-party data centers for its business.

Worldwide public-cloud services sales are expected to grow 17.5% this year to $214.3 billion, according to Gartner Inc.

Revenue in the company’s productivity and business unit, which includes Office, rose 14% in the quarter to $11 billion, exceeding analysts’ average estimate of $10.7 billion. Sales from the Intelligent Cloud division, made up of Azure and server software, jumped 19% to $11.4 billion -- the first quarter the unit has been Microsoft’s biggest by revenue.

Global shipments of personal computers increased 1.5% in the second quarter, Gartner said, fueled by businesses upgrading to the latest Windows operating system. Support for Windows 7 is ending in January, meaning companies need to upgrade to Windows 10. The older software’s expiration is also helping boost sales of the Microsoft 365 bundle as the company persuades customers to switch to internet-based subscriptions rather than one-time licenses.

Sales of Windows to PC makers were better than expected, rising 9% overall and 18% for the pricier professional editions, far outpacing the overall PC market. Four points of the growth in Pro revenue was also because PC makers are stocking up ahead of tariffs related to a U.S.-China trade war, said Mike Spencer, Microsoft general manager for investor relations.