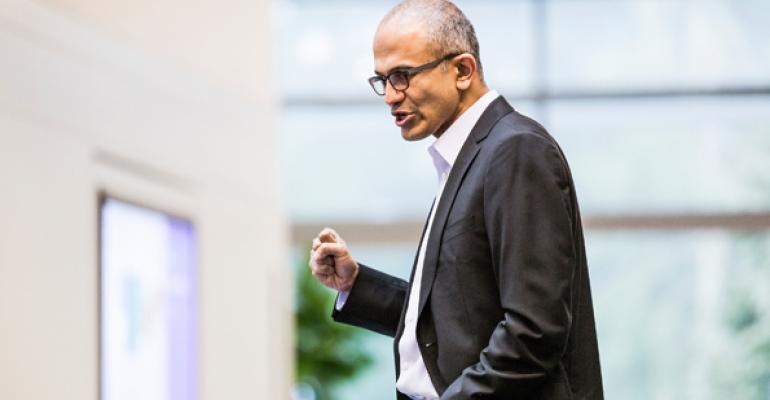 Microsoft Corp. Chief Executive Officer Satya Nadella told employees his leadership team is fully behind the sale of software to the U.S. Defense Department, after the company won a $10 billion Pentagon contract that some workers have opposed.

(Bloomberg) -- Microsoft Corp. Chief Executive Officer Satya Nadella told employees his leadership team is fully behind the sale of software to the U.S. Defense Department, after the company won a $10 billion Pentagon contract that some workers have opposed.

Addressing staff at a regular internal town-hall meeting, Nadella said he respects differing opinions on the issue, according to a person familiar with the discussion. Still, he said the company’s senior leadership team agrees that Microsoft should offer the best technology to institutions that protect U.S. freedom and democracy.

The Defense Department late Friday awarded the closely watched contract to modernize the Pentagon’s computing infrastructure to Microsoft, an upset victory for a company initially viewed as a distant second to Amazon.com Inc. in the market for cloud-computing services. The deal, known as JEDI, could be worth as much as $10 billion over a decade and may lead to other contracts.

Microsoft spokesman Frank Shaw declined to confirm specifics of Nadella’s comments, which opened the meeting, except to note that he addressed a list of topics including recent earnings and the cloud-computing contract win. The monthly meeting is attended in person by some Microsoft employees at headquarters in Redmond, Washington, and is webcast companywide.

Shaw said the company isn’t seeing employees protesting the contract internally. He said there has been “measured dialogue” on internal message boards about the deal, with some workers celebrating, some asking if they should be concerned about the support for the military, and others discussing how to view the question of whether Microsoft won the deal because of interference from U.S. President Donald Trump. Trump has repeatedly criticized Amazon and founder Jeff Bezos, who also owns the Washington Post.

On Tuesday, Dana Deasy, nominated to be the Pentagon’s chief information officer, said that to the best of his knowledge the White House didn’t reach out to the JEDI contract selection team. Deasy was speaking at a Senate Armed Services Committee hearing on his nomination.

An employee activist group calling itself Microsoft Workers 4 Good on Twitter had opposed the deal on the eve of Microsoft’s bid submission and has since said it is “disheartened that Microsoft accepted the JEDI contract.”

Other technology giants from Google to Amazon to Facebook Inc. have also encountered staff protests about issues such as military contracts, political advertising and the environment. Google, the No. 3 provider of cloud computing services, pulled out of consideration for JEDI last year amid employee concerns about the company’s ties to defense contracting. Workers at Microsoft’s GitHub unit have asked the company to cancel a contract with the U.S. Immigration and Customs Enforcement agency, and have gotten support from some Microsoft staffers.

Sponsor Content
The Death of Network Hardware Appliances and What It Means for Your Cloud Migration
Jan 25, 2021